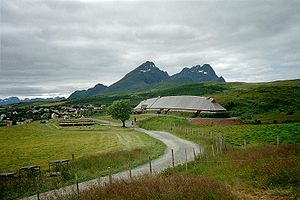 The Lofotr Viking Museum (Lofotr Vikingmuseum) is a historical museum based on a reconstruction and archaeological excavation of a Viking chieftain's village on the island of Vestvågøya in the Lofoten archipelago in Nordland county, Norway. It is located in the small village of Borg, near Bøstad, in the municipality of Vestvågøy.[1]

In 1983, archaeologists uncovered the Chieftain House at Borg (På Borg på Vestvågøya i Lofoten), a large Viking Era building believed to have been already established around the year 500 AD. A joint Scandinavian research project was conducted at Borg from 1986 until 1989. Excavations revealed the largest building ever to be found from the Viking period in Norway. The foundation of the Chieftain House at Borg measured 83 metres (272 ft) long and 9 metres (30 ft) high. The seat at Borg is estimated to have been abandoned around AD 950.[2][3][4] 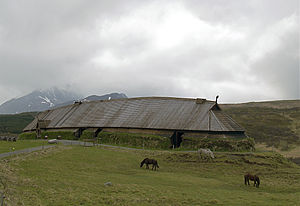 After the excavation ended, the remains of what had once been the long-house remained visible. The long-house has been reconstructed slightly to the north of the excavation site. In 1995, the Lofotr Viking Museum was opened. The museum includes a full reconstruction of the 83-metre (272 ft) long chieftain's house, a blacksmith's forge, two ships (replicas of the Gokstad ship, one in full scale size) and their boathouses, and various reenactments intended to immerse the visitor in life at the time of the Vikings. The main building was designed by Norwegian architect, Gisle Jakhelln.

The administration of Lofotr Viking Museum is located in the former parsonage of the Borge Church. In September 2006, a planned enlargement of Lofotr, the building of a large amphitheater into the ground between the reception building and the Chieftain House[5], was postponed because of the archeological findings of some 2,000-year-old cooking sites and pole holes at the site.

Today, the area is excavated and new buildings have been built on the site. This part of the museum comprises 2 permanent exhibition halls and a film theatre. The exhibition halls displays through videos and unique artifacts, the finding and excavation of Borg. Quite a few of the archeological artifacts are of remarkable character.[5] The extensive museum outdoor area is tied together with gravel walking paths, inviting the visitors to explore the history in a greater content than the exhibition halls alone - to see the reconstructed Chieftain´s house on top of the hill, to go on board the Viking ship, to see the surrounding views and try to grasp the value of the landscape and what it offered in the Viking Age - it all adds to the experience.

The museum is open all year, from 1 May to 15 September every day. The administration of Lofotr Viking Museum is located in the former parsonage of the Borge Church.

The Longhouse served as the pit stop of the fourth leg in the Amazing Race 23.