The logistic map is a polynomial mapping (equivalently, recurrence relation) of degree 2, often cited as an archetypal example of how complex, chaotic behaviour can arise from very simple non-linear dynamical equations. The map was popularized in a seminal 1976 paper by the biologist Robert May,[1] in part as a discrete-time demographic model analogous to the logistic equation first created by Pierre François Verhulst.[2] Mathematically, the logistic map is written

is a number between zero and one that represents the ratio of existing population to the maximum possible population. The values of interest for the parameter r are those in the interval (0, 4]. This nonlinear difference equation is intended to capture two effects:

However, as a demographic model the logistic map has the pathological problem that some initial conditions and parameter values lead to negative population sizes. This problem does not appear in the older Ricker model, which also exhibits chaotic dynamics.

case of the tent map.

The image below shows the amplitude and frequency content of some logistic map iterates for parameter values ranging from 2 to 4.

By varying the parameter r, the following behavior is observed:

For any value of r there is at most one stable cycle. If a stable cycle exists, it is globally stable, attracting almost all points.[7]:13 Some values of r with a stable cycle of some period have infinitely many unstable cycles of various periods.

The bifurcation diagram at right summarizes this. The horizontal axis shows the possible values of the parameter r while the vertical axis shows the set of values of x visited asymptotically from almost all initial conditions by the iterates of the logistic equation with that r value. 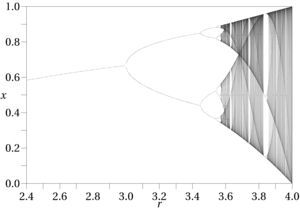 Bifurcation diagram for the logistic map. The attractor for any value of the parameter r is shown on the vertical line at that r.

The bifurcation diagram is a self-similar: if you zoom in on the above-mentioned value r = 3.82843 and focus on one arm of the three, the situation nearby looks like a shrunk and slightly distorted version of the whole diagram. The same is true for all other non-chaotic points. This is an example of the deep and ubiquitous connection between chaos and fractals.

Chaos and the logistic map 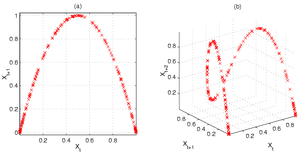 A cobweb diagram of the logistic map, showing chaotic behaviour for most values of r > 3.57 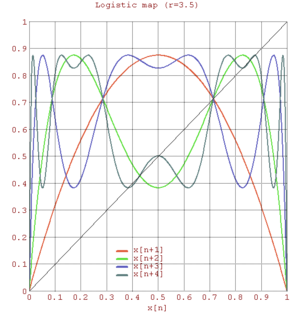 Logistic function f (red) and its iterated versions f 2 (green), f 3, and f 4 for r=3.5. For example, for any initial value on the horizontal axis, f 4 gives the value of the iterate four iterations later.

The relative simplicity of the logistic map makes it a widely used point of entry into a consideration of the concept of chaos. A rough description of chaos is that chaotic systems exhibit a great sensitivity to initial conditions—a property of the logistic map for most values of r between about 3.57 and 4 (as noted above). A common source of such sensitivity to initial conditions is that the map represents a repeated folding and stretching of the space on which it is defined. In the case of the logistic map, the quadratic difference equation (1) describing it may be thought of as a stretching-and-folding operation on the interval (0,1).[8]

The following figure illustrates the stretching and folding over a sequence of iterates of the map. Figure (a), left, shows a two-dimensional Poincaré plot of the logistic map's state space for r=4, and clearly shows the quadratic curve of the difference equation (1). However, we can embed the same sequence in a three-dimensional state space, in order to investigate the deeper structure of the map. Figure (b), right, demonstrates this, showing how initially nearby points begin to diverge, particularly in those regions of Xt corresponding to the steeper sections of the plot.

This stretching-and-folding does not just produce a gradual divergence of the sequences of iterates, but an exponential divergence (see Lyapunov exponents), evidenced also by the complexity and unpredictability of the chaotic logistic map. In fact, exponential divergence of sequences of iterates explains the connection between chaos and unpredictability: a small error in the supposed initial state of the system will tend to correspond to a large error later in its evolution. Hence, predictions about future states become progressively (indeed, exponentially) worse when there are even very small errors in our knowledge of the initial state. This quality of unpredictability and apparent randomness led the logistic map equation to be used as a pseudo-random number generator in early computers.[8]

It is often possible, however, to make precise and accurate statements about the likelihood of a future state in a chaotic system. If a (possibly chaotic) dynamical system has an attractor, then there exists a probability measure that gives the long-run proportion of time spent by the system in the various regions of the attractor. In the case of the logistic map with parameter  r = 4  and an initial state in (0,1), the attractor is also the interval (0,1) and the probability measure corresponds to the beta distribution with parameters  a = 0.5  and  b = 0.5. Specifically,[9] the invariant measure is

. Unpredictability is not randomness, but in some circumstances looks very much like it. Hence, and fortunately, even if we know very little about the initial state of the logistic map (or some other chaotic system), we can still say something about the distribution of states arbitrarily far into the future, and use this knowledge to inform decisions based on the state of the system.

Solution in some cases

where the initial condition parameter

, after a finite number of iterations

maps into a periodic sequence. But almost all

never repeats itself – it is non-periodic. This solution equation clearly demonstrates the two key features of chaos – stretching and folding: the factor 2n shows the exponential growth of stretching, which results in sensitive dependence on initial conditions, while the squared sine function keeps

is either of the complex numbers

with modulus equal to 1. Just as the squared sine function in the trigonometric solution leads to neither shrinkage nor expansion of the set of points visited, in the latter solution this effect is accomplished by the unit modulus of

for any value of

other than the unstable fixed point 0, the term

goes to 0 as n goes to infinity, so

goes to the stable fixed point

Finding cycles of any length when r = 4

For the r = 4 case, from almost all initial conditions the iterate sequence is chaotic. Nevertheless, there exist an infinite number of initial conditions that lead to cycles, and indeed there exist cycles of length k for all integers k ≥ 1. We can exploit the relationship of the logistic map to the dyadic transformation (also known as the bit-shift map) to find cycles of any length. If x follows the logistic map

and y follows the dyadic transformation

then the two are related by

is the number of cycles of length 13. Since this case of the logistic map is chaotic for almost all initial conditions, all of these finite-length cycles are unstable.