In Christology, Logos (Greek: Λόγος logos, that is, "word", "discourse" or "reason" i.e., rationality or reasoning) is a name or title of Jesus Christ, seen as the pre-existent Second Person of God according to the doctrine of the Trinity. It has been important in endeavoring to establish the doctrine of the divinity and morality of Jesus Christ and his position as God the Son in the Trinity by Trinitarian theologians as set forth in the Chalcedonian Creed.

The concept derives from the opening of the Gospel of John, which is often translated into English as: "In the beginning was the Word, and the Word was with God, and the Word was God." In the translations, "word" is used for logos (λόγος), but in theological discourse, this is often left untranslated.

Christ as the logos

Christian theologians often consider John 1:1 to be a central text in their belief that Jesus is God, in connection with the idea that the Father, the Son, and the Holy Spirit are equals. Though only in this verse is Jesus referred to as the Word of God, the theme recurs throughout the Gospel of John with variations.[1] Theologian N.T. Wright characterizes "Word" (logos) as being incomprehensible in human language. He claims that through belief the Logos will transform people with its judgment and mercy. According to Wright, John's view of the Incarnation, of the Word becoming flesh, strikes at the very root of what he terms "the liberal denial...of the idea of God becoming human...." His assessment is that when the "enfleshment" and speaking Word is removed from the center of Christian theology, all that is left is "a relativism whose only moral principle is that there are no moral principles, no words of judgment (because nothing is really wrong, except saying that things are wrong), no words of mercy (because you're all right as you are, so all you need is affirmation)."[2]

Theologian Stephen L. Harris claims the author of John adapted Philo's concept of the Logos, identifying Jesus as an incarnation of the divine Logos that formed the universe[3] (cf. Proverbs 8:22-36).

Although the term Logos is not retained as a title beyond the prologue, the whole book of John presses these basic claims. As the Logos, Jesus Christ is God in self-revelation (Light) and redemption (Life). He is God to the extent that he can be present to man and knowable to man. The Logos is God,[Jn 1:1] as Thomas stated: "My Lord and my God."[20:28] Yet the Logos is in some sense distinguishable from God, for "the Logos was with God."[1:1] God and the Logos are not two beings, and yet they are also not simply identical. In contrast to the Logos, God can be conceived (in principle at least) also apart from his revelatory action─although we must not forget that the Bible speaks of God only in his revelatory action. The paradox that the Logos is God and yet it is in some sense distinguishable from God is maintained in the body of the Gospel. That God as he acts and as he is revealed does not "exhaust" God as he is, is reflected in sayings attributed to Jesus: "I and the Father are one"[Jn 10:30] and also, "the Father is greater than I."[14:28] The Logos is God active in creation, revelation, and redemption. Jesus Christ not only gives God's Word to us humans; he is the Word.[1:14] [14:6] He is the true word─ultimate reality revealed in a Person. The Logos is God, distinguishable in thought yet not separable in fact. This was decreed at the First Council of Constantinople (381).[4]

Among many verses in the Septuagint prefiguring New Testament usage is Psalms 33:6 which relates directly to the Genesis creation.[5] Theophilus of Antioch references the connection in To Autolycus 1:7.[6] Augustine of Hippo considered that in Ps.33:6 both logos and pneuma were "on the verge of being personified".[7]

By the word (logos) of the Lord the heavens were made, and by the breath (pneuma) of his mouth all their host (dynamis).

David L. Jeffrey and Leon Morris[8][9] have seen in Luke 1:2 a first reference to Logos and Beginning:

... just as those who from the beginning (Greek arche) were eyewitnesses and ministers of the word (Greek logos) have delivered them to us.

The Gospel of John begins with a Hymn to the Word which identifies Jesus as the Logos and the Logos as divine. The last four words of John 1:1 (θεὸς ἦν ὁ λόγος, literally "God was the Logos," or "God was the Word") have been a particular topic of debate within Christianity. In this construct, the subject (the Logos) and the complement (God) both appear in the nominative case, and the complement is therefore usually distinguished by dropping any article, and moving it before the verb.[10][11] Grammatically, the phrase could therefore read either "the Word was God" or "the Word was a god." Early New Testament manuscripts did not distinguish upper and lower case,[10] so that pre-existing beliefs about the Trinity have influenced translation, although many scholars see the movement of "God" to the front of the clause as indicating an emphasis more consistent with "the Word was God."[12][13][14][15]

Some other translations, such as An American Translation (1935)[17] and Moffatt, New Translation,[18] render "the Word was divine." Related translations have also been suggested, such as "what God was the Word also was."[19]

Some nontrinitarian translations, such as the Unitarian Thomas Belsham's 1808 revision of William Newcome's version[20] and Jehovah's Witnesses' New World Translation,[21] use the rendering "and the word was a god".

Although "Word" is the most common translation of the noun Logos, other translations have been used. Gordon Clark (1902–1985), a Calvinist theologian and expert on pre-Socratic philosophy, famously translated Logos as "Logic": "In the beginning was the Logic, and the Logic was with God and the Logic was God."[22] He meant to imply by this translation that the laws of logic were derived from God and formed part of Creation, and were therefore not a secular principle imposed on the Christian world view.[23]

The question of how to translate Logos is also treated in Goethe's Faust, with Faust finally opting for die Tat, ("deed/action"). 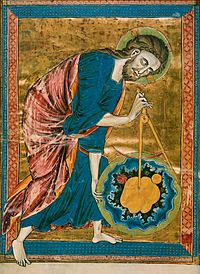 In Christian history and theology

Following John 1, the early Christian apologist Justin Martyr (c 150) identified Jesus as the Logos.[28][29] Like Philo, Justin also identified the Logos with the Angel of the LORD, and used this as a way of arguing for Christianity to Jews:

I shall give you another testimony, my friends, from the Scriptures, that God begot before all creatures a Beginning, [who was] a certain rational power [proceeding] from Himself, who is called by the Holy Spirit, now the Glory of the Lord, now the Son, again Wisdom, again an Angel, then God, and then Lord and Logos;[30]

In his First Apology, Justin used the Stoic concept of the Logos as a way of arguing for Christianity to non-Jews. Since a Greek audience would accept this concept, his argument could concentrate on identifying this Logos with Jesus.[28] However, Justin does not go so far as to articulate a fully consistent doctrine of the Logos.[28]

Post-apostolic Christian writers struggled with the question of the identity of Jesus and the Logos, but the Church’s doctrine never changed that Jesus was the Logos. Each of the first six councils defined Jesus Christ as fully God and fully human, from the First Council of Nicea (325) to the Third Council of Constantinople (680-681).[31] Christianity did not accept the Platonic argument that the spirit is good and the flesh is evil, and that therefore the man Jesus could not be God. Neither did it accept any of the Platonic beliefs that would have made Jesus something less than fully God and fully human at the same time. The original teaching of John’s gospel is, "In the beginning was the Logos, and the Logos was with God, and the Logos was God.... And the Logos became flesh and dwelt among us."[32] The final Christology of Chalcedon (confirmed by Constantinople III) was that Jesus Christ is both God and man, and that these two natures are inseparable, indivisible, unconfused, and unchangeable.[33]

On April 1, 2005, Joseph Cardinal Ratzinger (who became Pope Benedict XVI just over two weeks later) referred to the Christian religion as the religion of the Logos:

Christianity must always remember that it is the religion of the "Logos." It is faith in the "Creator Spiritus," (Creator Spirit), from which proceeds everything that exists. Today, this should be precisely its philosophical strength, in so far as the problem is whether the world comes from the irrational, and reason is not, therefore, other than a "sub-product," on occasion even harmful of its development or whether the world comes from reason, and is, as a consequence, its criterion and goal. The Christian faith inclines toward this second thesis, thus having, from the purely philosophical point of view, really good cards to play, despite the fact that many today consider only the first thesis as the only modern and rational one par excellence. However, a reason that springs from the irrational, and that is, in the final analysis, itself irrational, does not constitute a solution for our problems. Only creative reason, which in the crucified God is manifested as love, can really show us the way. In the so necessary dialogue between secularists and Catholics, we Christians must be very careful to remain faithful to this fundamental line: to live a faith that comes from the "Logos," from creative reason, and that, because of this, is also open to all that is truly rational.[34]

Catholics can use logos to refer to the moral law written in human hearts. This comes from Jeremiah 31:33 (prophecy of new covenant): "I will write my law on their hearts." St. Justin wrote that those who have not accepted Christ but follow the moral law of their hearts (logos) follow God, because it is God who has written the moral law in each person's heart. Though man may not explicitly recognize God, he has the spirit of Christ if he follows Jesus' moral laws, written in his heart.

Michael Heller has argued “that Christ is the logos implies that God’s immanence in the world is his rationality."[35]

In non-trinitarian and unitarian belief

Photinus denied that the Logos as the Wisdom of God had an existence of its own before the birth of Christ.[36] For Socinus, Christ was the Logos, but he denied His pre-existence; He was the Word of God as being His Interpreter (Latin: interpres divinae voluntatis).[37] Nathaniel Lardner and Joseph Priestley considered the Logos a personification of God's wisdom.[38]