For the town in Ecuador, see Logroño, Ecuador.

Logroño (Spanish pronunciation: [loˈɣɾoɲo]) is a city in northern Spain, on the Ebro River. It is the capital of the autonomous community of La Rioja, formerly known as La Rioja Province.

The population of the city in 2008 was 153,736 while the metropolitan area included nearly 197,000 inhabitants. The city is a centre of the trade in Rioja wine, for which the area is noted, and also produces wood, metal, and textile products.

The city's weather is moderated by its location in the valley of the river Ebro, and its weather conditions are typical of the continental Mediterranean climate. The average annual temperature is 13.9 °C (57 °F). The temperature in winter can drop to about five degrees below zero, while in summer it can exceed thirty-five degrees. The average annual precipitation is 400 mm (15.75 in).[1] The winds that affect the city are as follows: the northerly Cierzo, the southerly Ábrego, the easterly Solano, and the westerly Castellano. Intermediate winds are the northeasterly Navarrico, the northwesterly Regañón, the southwesterly Burgalés and the southeasterly Soriano.

Logroño was an old settlement, first of the Romans, under the name of Vareia,[3] a commercial port, and then of the Celts[dubious – discuss]. From the 10th century, possession of Logroño was disputed between the kings of Navarre and those of Castile; the region was finally annexed to Castile. Alfonso VI of Castile granted Logroño in 1095 a charter of rights that served as a model for other Spanish cities. In 1609 and 1610 Logroño was the main seat of the Basque witch trials, part of the Spanish Inquisition. 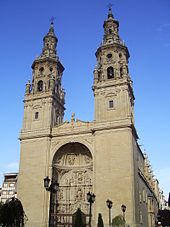 Logroño is the shopping and financial capital of La Rioja. Its economy is heavily reliant on wine. It is twinned with Dunfermline, Darmstadt, Libourne, Dax, Hagunia, Rancagua, Ciudad de La Rioja, Brescia. The new airport Logroño-Agoncillo connects the city with Madrid and Barcelona.

There are over 50 taperías (tapas restaurants) located within a four-block area near the town center. The traditional tapas restaurants often serve only one tapa [such as seta (mushroom), served as pincho - pintxo in Basque - meaning one serving, or media ración ("half portion"), a small plate of tapas], but offerthe Rioja D.O..

Façade of Parliament of La Rioja in Logroño. 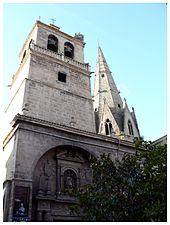 One of the Palaces of Espolón.

Calle del Laurel, known as "the path of the elephants" and Calle San Juan are typical streets where various restaurants and tapas bars offer some of the best pinchos and tapas in northern Spain. Calle Portales is the main street in the old town, where people like to walk and sit in the terraces to eat a meal or drink wine. Calle Marqués de San Nicolás (otherwise known as Calle Mayor) is the main area where people spend weekend nights.

Triple jumper Carlota Castrejana is from the city. David Lopez Moreno, the Brighton & Hove Albion midfielder is from Logroño.

The most important festivals are:

During the first week of January there is a cultural festival known as "ACTUAL" with music, theater and art.

Logroño is twinned with:

Logroño is associated with:

The city is served by the new Logroño railway station.

In the 4th season of the HBO television series True Blood, the witch Antonia is from Logroño. She refers to herself as Antonia Gavilan de Logroño.