Loire-Atlantique (French pronunciation: ​[lwa.ʁat.lɑ̃.tik]; formerly Loire-Inférieure) is a department on the west coast of France named after the Loire River and the Atlantic Ocean. 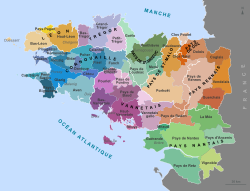 Historical regions of Brittany before 1790

Loire-Atlantique is one of the original 83 departments created during the French Revolution on March 4, 1790. Originally, it was named Loire-Inférieure, but its name was changed in 1957 to Loire-Atlantique.

The area is part of the historical Duchy of Brittany, and contains what many people still consider to be Brittany's capital, Nantes. However, when the system of French Regions was reviewed by the Vichy Government, the department was excluded from the Region of Brittany and included in the newly created Pays de la Loire Region. Whilst these administrative changes were reversed after the war, they were re-implemented in the 1955 boundary changes intended to optimise the management of the regions. There has since been a series of campaigns reflecting a strong local mood to have the department reintegrated with Brittany.

Loire-Atlantique is part of the current region of Pays-de-la-Loire and is surrounded by the department of Morbihan, Ille-et-Vilaine, Maine-et-Loire, and Vendée, with the Atlantic on the west.

Upper Brittany's indigenous language is Gallo, a romance language related to French. The number of Gallo language speakers has been in steady decline since the early 20th century. The language is neither official nor taught in primary or secondary education. The Breton language, a Celtic language, native to Lower Brittany, was historically spoken in the western area of Loire-Atlantique, and up to 1920 in Batz-sur-Mer. This area (Guérande, Le Croisic, and La Baule) has a rather Breton toponymy: for instance, Guérande originates from the Breton Gwenn Rann (white or pure place).

The folklore and musical traditions of eastern or Lower Brittany are generally similar to those of western or Upper Brittany. 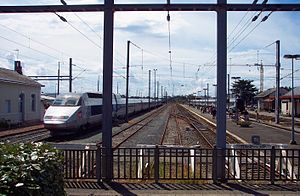 The département operates the Lila network of interurban buses, which link its villages, towns and cities. The urban areas of Nantes and Saint-Nazaire operate their own urban transport networks, known as Tan and Stran respectively.

By rail, the regional trains and buses of the TER Pays de la Loire link major towns and cities of the Pays de la Loire and adjoining regions, including those of the département. Nantes is on the TGV network, with high speed trains running to Paris by the LGV Atlantique in just over 2 hours.

Nantes Atlantique Airport, located 8 km to the southwest of the city of Nantes, serves the département and surrounding areas. It is the biggest airport in northwestern France, linking with several French, North African and European cities, as well as Montreal in Canada. It is currently planned that this airport will be replaced by a new Aéroport du Grand Ouest, situated 30 km to the north-west of Nantes in the commune of Notre-Dame-des-Landes. The €580 million project was approved in February 2008, with construction expected to start in 2012 and an opening date in 2015.[1]