Marie Dolores Eliza Rosanna Gilbert, Countess of Landsfeld[1] (17 February 1821 – 17 January 1861), better known by the stage name Lola Montez, was an Irish dancer and actress who became famous as a "Spanish dancer", courtesan, and mistress of King Ludwig I of Bavaria, who made her Countess of Landsfeld. She used her influence to institute liberal reforms. At the start of the Revolutions of 1848 in the German states, she was forced to flee. She proceeded to the United States via Switzerland, France and London, returning to her work as an entertainer and lecturer. 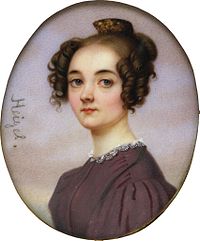 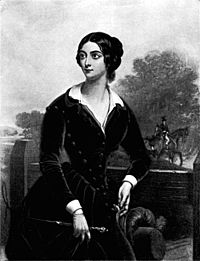 Lola's mother, Eliza(beth) Oliver was the child of Charles Silver Oliver, a former High Sheriff of Cork and member of Parliament for Kilmallock in County Limerick. Their residence was Castle Oliver. In December 1818, Ensign Edward Gilbert met Eliza Oliver when he arrived with the 25th Regiment. They were married on 29 April 1820, and Lola was born the following February, refuting persistent rumours that her mother was pregnant with her at the time of the wedding.[citation needed] The young family made their residence at King House in Boyle, County Roscommon, until early 1823, when they journeyed to Liverpool, thence departing for India on 14 March.[2]

As with many other aspects of her life, discrepant reports of the birth of Eliza Gilbert have been published. For many years, it was accepted that she was born in the city of Limerick, as she herself claimed, possibly on 23 June 1818; this year was graven on her headstone. However, when her baptismal certificate came to light in the late 1990s, it was established that Eliza Rosanna Gilbert was actually born in Grange, County Sligo, on 17 February 1821.[3] She was baptized at St Peter's Church in Liverpool on 16 February 1823, while her family was en route to her father's post in India.

Shortly after their arrival in India, Edward Gilbert died of cholera[citation needed].

Her mother, who was now 19, married another officer, Lieutenant Patrick Craigie, the following year. Craigie quickly came to care for a young Eliza, but her spoiled and half-wild ways concerned him greatly[citation needed].

Eventually, it was agreed she would be sent back to Britain to attend school, staying with Craigie's father in Montrose, Scotland, at first. But the "queer, wayward little Indian girl" quickly became known as a mischief-maker[citation needed]. On one occasion, she stuck flowers into the wig of an elderly man during a church service; on another, she ran through the streets naked[citation needed].

At the age of ten, Eliza was moved on again – this time to Sunderland, England. When her stepfather's older sister, Catherine Rae, set up a boarding school in Monkwearmouth with her husband, Eliza joined them to continue her education.[4][better source needed]

Eliza's determination and temper were to become her trademarks. Her stay in Sunderland lasted only a year, as she was then transferred to Bath for a more sophisticated education[citation needed].

In 1837, 16-year-old Eliza eloped with Lieutenant Thomas James, and they married.[citation needed] The couple separated five years later, in Calcutta, and she became a professional dancer under a stage name[citation needed].

She had her London debut as "Lola Montez, the Spanish dancer" in June 1843, but she had been recognized as "Mrs. James". The resulting notoriety hampered her career in England and she departed for the Continent[where?]. At this time, she was almost certainly accepting favours from a few wealthy men, and was regarded by many as a courtesan.[5]

Life as a courtesan 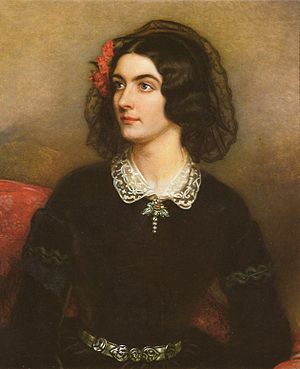 Lola Montez (1847), painted by Joseph Karl Stieler for Ludwig I of Bavaria and his Schönheitengalerie 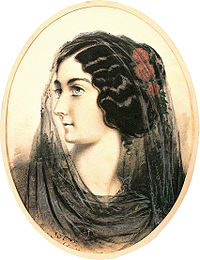 In 1844, Lola made a personally disappointing Parisian stage debut as a dancer in Fromental Halévy's opera, Le lazzarone. She met and had an affair with Franz Liszt, who introduced her to the circle of George Sand.[6] After performing in various European capitals, she settled in Paris, where she was accepted in the rather Bohemian literary society of the time, being acquainted with Alexandre Dumas, père, with whom she was rumoured to have had a dalliance. After the 1845 death of her lover, newspaperman Alexandre Dujarier, in a duel unrelated to her, she left Paris.[7]

In 1846, she arrived in Munich, where she was discovered by and became the mistress of, Ludwig I of Bavaria.[7] The rumour was, at the time they met, Ludwig had asked her in public if her bosom was real, to which her response was to tear off enough of her garments to prove that it was.[8][9] She soon began to use her influence on the King and this, coupled with her arrogant manner and outbursts of temper, made her unpopular with the local population (particularly after documents were made public showing that she was hoping to become a naturalized Bavarian citizen and be elevated to nobility). Despite the opposition, Ludwig made her Countess of Landsfeld on his next birthday, 25 August 1847. Along with her title, he granted her a large annuity.[10][11]

For more than a year, she exercised great political power, which she directed in favor of liberalism, against the conservatives and the Jesuits.[10][11] Her influence became so great that the ultramontane administration of Karl von Abel was dismissed because that minister objected to her being made Countess Landsfeld. The students of the university were divided in their sympathies, and conflicts arose shortly before the outbreak of the revolutions of 1848, which led the King, at Lola's instigation, to close the university.[12] In March 1848, under pressure from a growing revolutionary movement, the university was re-opened, Ludwig abdicated, and Montez fled Bavaria, her career as a power behind the throne at an end.[5][12] It seems likely that Ludwig's relationship with Montez contributed greatly to the fall from grace of the previously popular king.[13]

After a sojourn in Switzerland, where she waited in vain for Ludwig to join her, she made one brief excursion to France and then removed to London in late 1848. There she met and quickly married George Trafford Heald, a young army cornet (cavalry officer) with a recent inheritance.[13] But the terms of her divorce from Thomas James did not permit of either spouse's remarriage while the other was living, and the beleaguered newlyweds were forced to flee the country to escape a bigamy action brought by Heald's scandalized maiden aunt.[13] The Healds resided for a time in France and Spain, but within two years, the tempestuous relationship was in tatters, and George reportedly drowned.[14] In 1851 she set off to make a new start in the United States, where she was surprisingly successful at first in rehabilitating her image.[2] 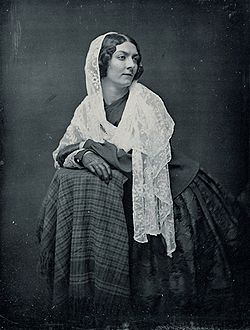 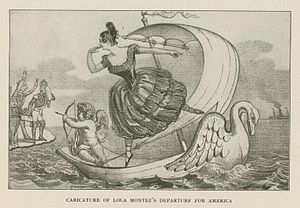 A caricature by David Claypoole Johnston from the period showing Lola Montez leaving Europe for the United States.

From 1851 to 1853, she performed as a dancer and actress in the eastern United States, one of her offerings being a play called Lola Montez in Bavaria.[10] In May 1853, she arrived at San Francisco.[13] Her performances there created a sensation, but soon inspired a popular satire, Who's Got the Countess?.[15] She married Patrick Hull, a local newspaperman, in July and moved to Grass Valley, California, in August. This marriage soon failed; a doctor named as corespondent in the divorce suit brought against her was shortly after murdered.[14] Montez remained in Grass Valley at her little house for nearly two years.[16] The restored Home of Lola Montez went on to become California Historical Landmark No. 292.[17] Montez served as an inspiration to another aspiring young entertainer, Lotta Crabtree. Lotta's parents ran a boarding house in Grass Valley, and Lotta soon attracted the attention of her neighbor Montez, who encouraged Lotta's enthusiasm for performance.

In June 1855, Montez departed for a tour of Australia to resume her career by entertaining miners at the gold diggings during the gold-rush of the 1850s, arriving at Sydney on 16 August 1855.[5]

Historian Michael Cannon claims that "In September 1855 she performed her erotic Spider Dance at the Theatre Royal in Melbourne, raising her skirts so high that the audience could see she wore no underclothing at all. Next day, the Argus thundered that her performance was 'utterly subversive to all ideas of public morality'. Respectable families ceased to attend the theatre, which began to show heavy losses."[18] At Castlemaine in April 1856, she was "rapturously encored" after her Spider Dance in front of 400 diggers (including members of the Municipal Council who had adjourned their meeting early to attend the performance), but drew the wrath of the audience by insulting them following some mild heckling.[19]

She earned further notoriety in Ballarat when, after reading a bad review in The Ballarat Times, she allegedly attacked the editor, Henry Seekamp with a whip[citation needed]. The "Lola Montes Polka" (composed by Albert Denning) is rumored to have been inspired by this event[citation needed], however, the song was published in 1855 and the incident with Seekamp occurred months later in February 1856[citation needed].

She departed for San Francisco on 22 May 1856[citation needed]. On the return voyage her manager was lost after going overboard.[14]

Later life in the U.S.

She arranged in 1857 to deliver a series of moral lectures in Britain and America written by Rev. Charles Chauncy Burr.[14][20][21]

She spent her last days in rescue work among women.[10] In November 1859, the Philadelphia Press reported that Lola Montez was

"living very quietly up town, and doesn't have much to do with the world's people. Some of her old friends, the Bohemians, now and then drop in to have a little chat with her, and though she talks beautifully of her present feelings and way of life, she generally, by way of parenthesis, takes out her little tobacco pouch and makes a cigarette or two for self and friend, and then falls back upon old times with decided gusto and effect. But she doesn't tell anybody what she's going to do."[22]

By then she was showing the tertiary effects of syphilis and her body began to waste away. She died at the age of 39 on 17 January 1861. She is buried in Green-Wood Cemetery in Brooklyn, New York, where her tombstone states: "Mrs. Eliza Gilbert / Died 17 January 1861".[14]