Creighton Tull Chaney (February 10, 1906 – July 12, 1973), known by his stage name Lon Chaney, Jr., was an American actor known for playing Larry Talbot in the 1941 film The Wolf Man and its various crossovers, as well as portraying other monsters such as The Mummy, Frankenstein's Monster, and Count Alucard (son of Dracula) in numerous horror films produced by Universal Studios.[1] He also portrayed Lennie Small in Of Mice and Men (1939). Originally referenced in films as Creighton Chaney, he was later credited as "Lon Chaney, Jr." in 1935, and after 1941's Man Made Monster, beginning as early as The Wolf Man later that same year, he was almost always billed under his more famous father's name as Lon Chaney. Chaney had English, French and Irish ancestry, and his career in movies and television spanned four decades, from 1931 to 1971. 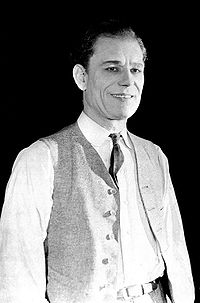 Creighton was born in Oklahoma City, Oklahoma Territory, the son of silent film star Lon Chaney and Frances Cleveland Creighton Chaney, a singing stage performer who traveled in road shows across the country with Creighton. His parents' troubled marriage ended in divorce in 1913 following his mother's scandalous public suicide attempt in Los Angeles. Young Creighton lived in various homes and boarding schools until 1916, when his father (now employed in the film industry) married Hazel Hastings and could provide a stable home.

From an early age, he worked hard to get out of his famous father's shadow. In young adulthood, his father discouraged him from show business, and he attended business college and became successful in a Los Angeles appliance corporation. Creighton, who had begun working for a plumbing company, married Dorothy Hinckley the daughter of his employer Ralph Hinckley, and they had two sons: Lon Ralph Chaney and Ronald Creighton Chaney. But Creighton's life changed forever when his father was diagnosed with throat cancer and died on August 26, 1930 at the age of 47. Many articles and biographies over the years report that Creighton was led to believe his mother had died while he was a boy, and was only made aware she lived after his father's death. Creighton always maintained he had a tough childhood.

It was only after his father's death that Chaney started acting in films, beginning with an uncredited bit part in the 1932 film Girl Crazy. He appeared in films under his real name until 1935, when he began to be billed as "Lon Chaney, Jr." From 1942 onward, he was billed as "Lon Chaney" although the "Jr." was usually added by others when they referred to him to distinguish him from his more famous father, whom Chaney, Jr. resembled. Chaney first achieved stardom and critical acclaim in the 1939 feature film version of Of Mice and Men, in which he played Lennie Small. Chaney was asked to test for the role of Quasimodo for the 1939 remake of The Hunchback of Notre Dame. The role went to Charles Laughton.

With his third-billed character role in One Million B.C. (1940) as Victor Mature's caveman father, Chaney began to be viewed as a character actor in the mold of his father. He had in fact designed a swarthy, ape-like Neanderthal make-up on himself for the film, but production decisions and union rules prevented his following through on emulating his father in that fashion. Put under contract by Universal Pictures Co. Inc., Chaney was cast in Man Made Monster (1941), a science-fiction horror thriller originally written with Karloff in mind. Chaney's performance led to an offer to star in The Wolf Man (1941) for Universal, a role which, much like Karloff's Frankenstein monster, would largely typecast Chaney as a horror film actor for the rest of his life.

Despite being typecast as the Wolf Man, the 6-foot 2-inch, 220 pound actor managed to carve out a secondary niche as a supporting actor and villain in several crime films and westerns, including Big House, USA (1955), I Died A Thousand Times (1955), Indestructible Man (1956), The Silver Star (1955), and even a Martin and Lewis comedy, Pardners (1956). He also starred in a series of radio show appearances, including psychological mysteries on the Inner Sanctum radio show. After making 30 films for Universal, he left the studio and worked primarily in character roles, including such notable films such as High Noon and Casanova's Big Night, along with roles in lower-budget films and television shows. Chaney also appeared in on the stage in such productions as Born Yesterday, where he assumed the Broderick Crawford role.

Chaney established himself as a favorite of producer Stanley Kramer; in addition to playing a key supporting role in High Noon (1952) (starring Gary Cooper), he also appeared in Not as a Stranger (1955)—a hospital melodrama featuring Robert Mitchum and Frank Sinatra—and The Defiant Ones (1958, starring Tony Curtis and Sidney Poitier). Kramer told the press at the time that whenever a script came in with a role too difficult for most actors in Hollywood, he called Chaney.

One of his most legendary roles was a 1952 live television version of Frankenstein on the anthology series Tales of Tomorrow for which he allegedly showed up drunk, though that contention is unsubstantiated.[2] During the live broadcast, Chaney, playing the Monster, apparently thought it was just a rehearsal and he would pick up furniture that he was supposed to break, only to gingerly put it back down while muttering, "I saved it for you."[3]

He became quite popular with baby boomers after Universal released its back catalog of horror films to television in 1957 (Shock Theater) and Famous Monsters of Filmland magazine regularly focused on his films. In 1957, Chaney went to Ontario, Canada, to costar in the first ever American-Canadian television production, as Chingachgook in Hawkeye and the Last of the Mohicans, suggested by James Fenimore Cooper's stories. The series ended after 39 episodes. That same year, Universal released the popular film biography of his father, Man of a Thousand Faces, featuring a semi-fictionalized version of Creighton's life story from his birth up until his father's death. Roger Smith played the young Creighton. He appeared in a 1958 episode of the western series Tombstone Territory titled "The Black Marshal from Deadwood", and appeared in numerous western series such as Rawhide. He also hosted the 13-episode television anthology series 13 Demon Street in 1959, which was created by Curt Siodmak. 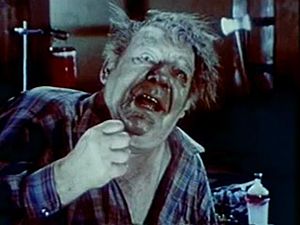 In the 1960s, Chaney's career ran the gamut from horror productions such as Roger Corman's The Haunted Palace and big-studio Westerns such as Welcome to Hard Times, to such low budget productions as Hillbillys in a Haunted House and Dr. Terror's Gallery of Horrors (both 1967). His bread-and-butter work during this decade was television – where he made guest appearances on everything from Wagon Train to The Monkees – and in a string of supporting roles in low-budget Westerns produced by A. C. Lyles for Paramount. In 1962 Chaney got a brief chance to play Quasimodo in a simulacrum of his father's make-up, as well as return to his roles of the Mummy and the Wolf Man on the television series Route 66 with friends Boris Karloff and Peter Lorre. During this era, he starred in Jack Hill's Spider Baby (filmed 1964, released 1968), for which he also sang the title song.

In later years he battled throat cancer and chronic heart disease among other aliments after decades of heavy drinking and smoking. In his final horror film, Dracula vs. Frankenstein (1971), directed by Al Adamson, he played Groton, Dr. Frankenstein's mute henchman. He filmed his part in the spring of 1969, and shortly thereafter performed his final film role, also for Adamson in The Female Bunch. Chaney had lines in The Female Bunch but his hoarse, raspy voice was virtually unrecognizable. Due to illness he retired from acting to concentrate on a book about the Chaney family legacy, A Century of Chaneys, which remains to date unpublished in any form. His grandson, Ron Chaney, was working on completing this project.[4]

Chaney was well liked by some co-workers – "sweet" is the adjective that most commonly emerges from those who acted with, and liked him – yet he was capable of intense dislikes. For instance, he and frequent co-star Evelyn Ankers did not get along at all despite their on-camera chemistry. He was also known to befriend younger actors and stand up for older ones who Chaney felt were belittled by the studios. One example was that of William Farnum, a major silent star who played a bit part in The Mummy's Curse. According to co-star Peter Coe, Chaney demanded that Farnum be given his own chair on the set and be treated with respect, or else he would walk off the picture.

Chaney had run-ins with actor Frank Reicher (whom he nearly strangled on camera in The Mummy's Ghost ) and director Robert Siodmak (over whose head Chaney broke a vase).[5] Actor Robert Stack claimed in his 1980 autobiography that Chaney and drinking buddy Broderick Crawford were known as "the monsters" around the Universal Pictures lot because of their drunken behavior that frequently resulted in bloodshed.[6]

In 1999, a Golden Palm Star on the Palm Springs, California, Walk of Stars was dedicated to him.[7]

Chaney died of heart failure at age 67 on July 12, 1973 in San Clemente, California.[8] His body was donated for medical research.[1] Chaney's corpse was dissected by medical students, and the medical school kept his liver and lungs in jars as specimens of what extreme alcohol and tobacco abuse can do to human organs. There is no grave to mark his final resting place.

He was honored by appearing as the Wolf Man on one of a 1997 series of United States postage stamps depicting movie monsters. His grandson Ron Chaney, Jr. frequently appears as a guest at horror movie conventions.[citation needed]

This is a list of known Lon Chaney, Jr. theatrical films broken down by decade. Television appearances are listed separately.