The London Aquatics Centre is an indoor facility with two 50-metre (160-foot) swimming pools and a 25-metre (82-foot) diving pool in Queen Elizabeth Olympic Park at Stratford, London, it was one of the main venues of the 2012 Summer Olympics and the 2012 Summer Paralympics. The centre was used for the swimming, diving and synchronised swimming events. After significant modification the centre opened to the public in March 2014.

It was designed by Pritzker Prize-winning architect Zaha Hadid in 2004 before London won the bid for the 2012 Summer Olympics. The centre was built alongside the Water Polo Arena, and opposite the Olympic Stadium on the opposite bank of the Waterworks River. The site is 45 metres (148 feet) high, 160 metres (520 feet) long and 80 metres (260 feet) wide. The wave-like roof is stated to be 11,200 square feet (1,040 m2), a reduction from the previously stated 35,000 square feet (3,300 m2). The design was inspired by the Dollan Aqua Centre in East Kilbride, Scotland.[citation needed]

The complex has a 50m competition pool, a 25m competition diving pool and a 50m warm-up pool.[2] The 50m pool is 3 metres deep, like the one in the Beijing National Aquatics Center, in order to be fast.[3] Its floor can be moved to reduce the depth.[4] There are also moveable booms that allow its size to be changed.[2] The diving pool has platform boards at heights of 3m, 5m, 7.5m and 10m and three 3m springboards.[5] For the television coverage of the Olympics, the pools were also equipped with innovative cameras in order to present the action from multiple angles.[6]

Because the centre was designed before the Olympic bid was completed, the spectator wings were not part of the original design. They were later added to fit the estimated audience.

Jacques Rogge, IOC President, described the Centre as a "masterpiece".[7]

On 1 December 2005 Hadid was instructed to revise her designs after a specification change led to a doubling of the £75 million estimated cost.[8] The revised plans were unveiled on 27 November 2006.[9][10] Although the same general design was kept, with capacity for 17,500 spectators, the revised Aquatics Centre design was much smaller and was expected to cost much less than previously expected. However, subsequent cost increases were reported to Parliament in 2008.[11]

The construction contract was awarded to Balfour Beatty in April 2008.[12] At the same time, it was reported that the centre would cost about three times as much as was originally estimated, totalling about £242 million. The cost increases were attributed to construction inflation and VAT increases, and also included the estimated cost of converting the facility for public use after the Olympic and Paralympic Games.[13] The Centre was completed in July 2011 at a final cost of £269 million.[7]

The design demonstrates the precast-concrete skills with by exposing the concrete finish rather than painting or cladding which was provided by Peri. The precast floor terracing was manufactured by Bell & Webster Concrete in Lincolnshire, England. The terracing units were delivered and positioned to accelerate the speed of construction. The unique six-board diving platform is made from 462 tonnes of concrete. The aluminium roof covering was provided by Kalzip. The steel structure was built in cooperation with Rowecord Engineering, of Newport, Wales. The ceiling was built with 30,000 sections of Red Louro timber. The steel roof weighs 3,200 tonnes. The three pools hold around 10 million litres (2.6 million gallons) of water.

After the Paralympic Games, the Aquatic Centre was deconstructed to result in a smaller space. The frame wings on either side of the central space were removed, unbolted, and sold. The PVC wrap that temporarily enclosed the space was also sold, while the seats and toilets were reused elsewhere.[14] As certain parts of the building were no longer needed, they were recycled via Vinyloop. This allowed the standards of the Olympic Delivery Authority concerning environmental protection to be met.[15]

During the Games the venue had a capacity of 17,500. The two temporary "wings" have been removed, reducing the capacity to a regular 2,500 with an additional 1,000 seats available for major events.[5] Of all the swimming venues built for the 2012 Summer Olympics, the Aquatics Centre is the only one that will remain afterwards, albeit in a downsized form. 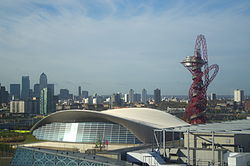 The Aquatics Centre seen after the games, without the temporary stands.

It is expected[by whom?] that the centre will replace the pools at the Crystal Palace National Sports Centre in South London as the city's leading facility for aquatic sports. Since the Olympic Games the venue has been modified, especially by removing the temporary seating that flanked the centre during the Games. It is open to the public (March 1, 2014).[16] Admission prices are in line with local leisure centres.[7][17] The adjacent Water Polo Arena was dismantled after the Olympic Games, which left the Aquatics Centre as the sole swimming venue at the park. The Centre will host the 2014 FINA/NVC Diving World Series and the 2016 European Aquatics Championships.[18][19]