The London Borough of Brent (

pronunciation (help·info)) is a London borough in north west London, and forms part of Outer London. The major areas are Kilburn, Wembley and Harlesden.

It borders the boroughs of Harrow to the north-west, Barnet to the north-east, Camden to the east and Ealing, Hammersmith and Fulham, and Kensington and Chelsea to the south, and Westminster to the south-east. Most of the eastern border is formed by the Roman road Watling Street, which is now the modern A5. Brent has a mixture of residential, industrial and commercial land. Brent is home to Wembley Stadium, one of the country's biggest landmarks, as well as Wembley Arena. The local authority is Brent London Borough Council.

The borough has seen illegal dumping on the borough’s streets between 2013/14 and 2014/15 surge by 84 per cent, the most recorded by a local authority in England.[3] According to the findings of a survey by property group Rightmove, Brent is the third most unhappiest borough in London, based on a number of factors including décor, space, value, pride, costs, safety, amenities, recreation, community, contentment, neighbourliness and area contentment.[4] Brent has the highest proportion of housing benefit claims by private tenants in the country as a percentage of all households according to the Financial Times.[5] 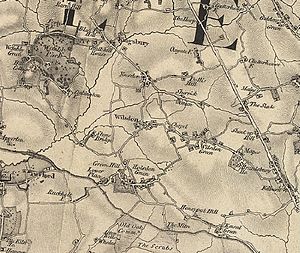 Brent is divided into 21 Electoral Wards. Some wards share a name with the traditional areas above, others include Barnhill, Dudden Hill, Fryent, Mapesbury and Welsh Harp.[7]

The Brent borough includes three parliamentary constituencies: Brent North, Brent Central, and Hampstead and Kilburn, which includes part of the London Borough of Camden. Before the 2010 United Kingdom general election it was divided into three constituencies contained wholly within the borough - Brent South, Brent East and Brent North.[citation needed]

Brent London Borough Council is elected every four years, with currently 63 councillors being elected at each election. While the Labour Party has been the largest single party on the council for about half its history and the Conservatives and the Liberal Democrats have each been the largest party at other times, there have been several periods when no party has had overall control. Labour regained control in 2010 and increased their majority at the 2014 election. As of the 2014 election the council is composed of the following councillors:-[8]

The leader of the Council is Labour Councillor Muhammad Butt.[citation needed]

In 1801, the civil parishes that form the modern borough had a total population of 2,022. This rose slowly throughout the 19th century, as the district became built up; reaching 5,646 in the middle of the century. When the railways arrived the rate of population growth increased. The population peaked in the 1960s, when industry began to relocate from London.

The borough of Brent is extremely diverse, ethnically. In the 2011 census, those who claimed British white heritage made up 18% of the borough's population. 18% claimed other white heritage, 5% were of mixed heritage, those of South Asian heritage comprised about 33%, those of African and Caribbean heritage about 19%, and other ethnic groups about 7%. Whites were found in highest proportion in the wards of Mapesbury (the area between Willesden Green and Cricklewood), Brondesbury Park, Queen's Park and Kilburn. Blacks in highest proportion were found in Stonebridge, Harlesden and Kensal Green wards. Asians are centred in the wards of Alperton, Wembley Central and Kenton.[10] Brent has the highest proportion of Irish residents in mainland Britain, with 4% of the population.[11]

Major districts of Brent include: Cricklewood, Kilburn, Willesden and Wembley.

Climate in this area has mild differences between highs and lows, and there is adequate rainfall year round. The Köppen Climate Classification subtype for this climate is "Cfb". (Marine West Coast Climate/Oceanic climate).[13]

Diageo has its head office in Park Royal and in the London Borough of Brent,[15][16] on a former Guinness brewery property.[17] The brewery was closed in 2004; it had produced beer since 1936.[18] Diageo planned to move its head office to Brent from Central London when the lease on the Central London office expired in 2010.[17]

Brent is the joint fourth-worst Borough in London for levels of child poverty. Save the Children reported in 2011 that 11,000 children are impoverished.[19]

Main article: List of schools in the London Borough of Brent

Recycling has been compulsory in the borough of Brent since 2008.[20] Through a green box collection scheme[20] the borough aims to improve on the 25 per cent recycled waste it already achieves.[citation needed]

The London Borough of Brent has three fire stations within the borough: Park Royal, Wembley and Willesden. Brent has a mixture of residential, industrial and commercial land. Most notably, Wembley National Stadium is within the area - on match days the safety of over 90,000 people is the responsibility of the London Fire Brigade. Wembley covers the largest area in the borough, 19.1 km2 (7.4 sq mi).[21] Two pumping appliances, a fire rescue unit and an aerial ladder platform are based there. Willesden, for its relatively small, in comparison to Wembley, station ground (10.5 km2 (4.1 sq mi)), responded to over a thousand incidents in 2006/2007.[21] Two pumping appliances reside there. Park Royal, with its one pumping appliance and an incident response unit, has one of the smallest station grounds; just 8.1 km2 (3.1 sq mi). Within the borough, 4,105 incidents occurred in 2006/2007.[21]

The numerous London Underground, London Overground and National Rail stations in the borough are:

In March 2011, the main forms of transport that residents used to travel to work were (of all residents aged 16–74):