From Infogalactic: the planetary knowledge core
Jump to: navigation, search
This article is about the London borough. For the neighbourhood in the southern part of the borough, see Harringay.

The London Borough of Haringey

i/ˈhærɪŋɡeɪ/[2] is a London borough, north London, classified by some definitions as part of Inner London, and by others as part of Outer London. It was created in 1965 by the amalgamation of three former boroughs. It shares borders with six other London boroughs. Clockwise from the north, they are: Enfield, Waltham Forest, Hackney, Islington, Camden, and Barnet.

Haringey covers an area of more than 11 square miles (28.5 km2).[3] Some of the more familiar local landmarks include Alexandra Palace, Bruce Castle, Jacksons Lane, Highpoint I and II, and Tottenham Hotspur Football Club. The borough has extreme contrasts:[4] areas in the west, such as Highgate, Muswell Hill and Crouch End are among the most prosperous in the country; in the east of the borough, some wards are classified as being among the most deprived 10% in the country.[5] Haringey is also a borough of contrasts geographically. From the wooded high ground around Highgate and Muswell Hill, at 426.5 feet (130.0 m), the land falls sharply away to the flat, open low lying land beside the River Lea in the east. The borough includes large areas of green space, which make up more than 25% of its total area.[5]

The local authority is Haringey London Borough Council. In recent years, Haringey Council has become the subject of nationwide criticism over its handling of the welfare of young children in connection with the murder of Victoria Climbié and the death of Baby P.[4] In March 2009, Haringey Council's performance was placed by the Audit Commission in the bottom four of the country and the worst in London.[6] In December 2009, Haringey's performance was placed by Ofsted in the bottom nine in the country for children's services.[7] The Council's Children's Services has significantly improved over the last two years. A series of positive Ofsted inspections culminated in the service being taken out of 'special measures' by the government in February 2013.[8] 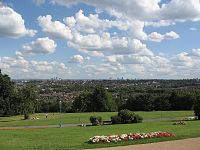 South-west Haringey with the City in the background, from Alexandra Palace, one of the highest points in London.

In the Ice Age, Haringey was at the edge of a huge glacial mass that reached as far south as Muswell Hill.[9] There is evidence of both Stone Age and Bronze Age activity.[10]

Prior to the Romans' arrival, Haringey was part of a large area covering Essex and Middlesex which was home to a Celtic tribe called Trinobantes.

The Romans' presence is evidenced chiefly by the roads they built through the area. Tottenham High Road was part of the main Roman thoroughfare of Ermine Street. There have also been Roman finds in the borough which suggests possible Roman settlement.

In the 5th and 6th centuries the Saxon invasions brought Haering, the chieftain whose name still lives on today in local placenames.

Haringey remained a rural area until the 18th century when large country houses close to London became increasingly common. The coming of the railways from the mid-nineteenth century onwards led to rapid urbanisation; by the turn of the century much of Haringey had been transformed from a rural to an urbanised environment.

The Haringey coat of arms and logo

Main article: Coat of arms of the London Borough of Haringey
File:Haringeyarms.PNG
Haringey coat of arms

The borough has a simple badge described as "Eight Rays" [as in the arms].[12] A flag is used which looks like a banner of arms but with the tinctures reversed, so that it has eight black rays on a yellow field.[14]

The arms is used in the mayoral regalia of the borough. The mayoral chain has the heraldic achievement hanging in a badge made out of 18 k gold and enamel, with the text "The London Borough of Haringey MCMLXV". The chain has stylized H's and hares sitting within laurel wreaths. The hares represent the name of the borough, since Haringey is believed to mean "a meadow of Hares".[15]

Haringey is a borough of contrasts geographically. From the wooded high ground around Highgate and Muswell Hill, at 426.5 feet (130.0 m), the land falls sharply away to the flat, open low lying land beside the River Lea in the east. 60 hectares within the borough are designated as part of the Metropolitan Green Belt.

Haringey shares borders with six other London boroughs. Clockwise from the north, they are: Enfield, Waltham Forest, Hackney, Islington, Camden, and Barnet. It covers an area of more than 11 square miles (28.5 km2).[3] Some of the more familiar local landmarks include Alexandra Palace, Bruce Castle and Tottenham Hotspur Football Club.

Haringey has 600 acres (2.4 km2) of parks, recreation grounds and open spaces[16] which make up more than 25% of its total area.[5] They include both smaller local areas and large green areas which provide an amenity for Londoners beyond the borough's boundaries. Local Nature Reserves and a number of conservation areas can also be found in the borough. The borough is also home to five distinct ancient woods. These are Highgate Woods, Queen's Wood, Coldfall Wood, Bluebell Wood and North Wood.[17]

The borough has achieved Green Flag status for eight of its parks which is the highest awarded to any London borough.[16] Highgate Wood in Haringey is one of only eight Green Heritage sites in London.[18]

There are three rivers of note still flowing above ground in the borough. These are:

There are a large number of districts within the borough. For a complete list see List of districts in Haringey.

According to the 2011 census,[20] 35.75% of the borough's population were white British, 23% were "other White", 9% were of Black African heritage, and 7.1% were of Black Caribbean heritage. Haringey is also home to several smaller Asian communities.

The local council and housing associations provide about 27,463 affordable homes and in 2006 over 19,000 households were waiting to be housed by the borough. There are almost 5,500 households living in temporary accommodation. In 2002/03 over 1,300 households were accepted as homeless by the council.[19]

There are 19 wards in Haringey. Although they bear the names of long-established local areas, many have boundaries which do not exactly match the locally-understood boundaries of those areas.

The borough has been Labour-run since 1971. No Conservative candidate has won a local government election in Haringey since 1998. In May 2006 Labour retained control of the Council with a majority of just three seats over the Liberal Democrats.

Seats on Haringey Council, by party:

(Boundary changes in 2002 reduced the number of councillors by 2)

In recent years, Haringey Council has become the subject of nationwide criticism over its handling of the welfare of young children, in connection with the murder of Victoria Climbié and the death of Baby P.[4] George Meehan, Council leader at the time of both the Victoria Climbie inquiry and the death of Baby P, resigned after a "damning" examination of Social Services caused by the Baby P case. He and Liz Santry, cabinet member for Children's Services, initially refused to resign at a Full Council meeting. All Labour Councillors voted for them to remain in their posts. Sharon Shoesmith, who was sacked on 8 December 2008 without any compensation package over the Baby P affair, is suing for lack of notice.

In March 2009, the council's overall performance was assessed in an Audit Commission review as among the fourth worst in the whole country, and the worst in London.[6] Its previous three stars were reduced to one.

The main sectors of employment in Haringey are:

Haringey is situated within the growth corridor connecting London with Stansted, Cambridge and Peterborough.[24]

Haringey has 63 primary (including infant and junior) schools, 10 secondary schools, a City Academy, 4 special schools and a pupil support centre. In addition, there are off site provision and study support centres for children and young people with additional needs. Ten Children’s Centres[31] were opened in 2006 and a further eight were planned for 2008.

The number of pupils in Haringey Schools as at January 2006 was 34,990 (Including nursery age children). This total was made up as follows:

In 2014 Haringey Council contacted OFSTED and the police after video footage emerged showing multiple incidents where primary age children at the Harris Primary Academy Coleraine Park, in Tottenham, were physically restrained or "dragged around", each by either two or three members of staff. An executive from the National Association of Head Teachers described it as "horrible" to see a "really distressed" child restrained in this way. The school's policy requires any use of restraint to be notified to the parents in writing, but this had not happened. The school issued a statement saying that physical restraint is only used when pupils present a risk to themselves or others, and that it can make it possible for them to continue in mainstream education rather than being permanently excluded.[32]

Tottenham Hotspur Football Club, currently in the FA Premier League, who play at White Hart Lane which is located in the borough on Tottenham High Road. The borough also has two Non-League football clubs, Haringey Borough F.C. and Greenhouse London F.C., who both play at Coles Park.

The borough's ice hockey team, the Haringey Greyhounds, currently play at Alexandra Palace. Alexandra Palace has also hosted other events including the PDC World Darts Championship and a number of Boxing events.

The 16 National Rail, London Overground and London Underground stations in the borough are: