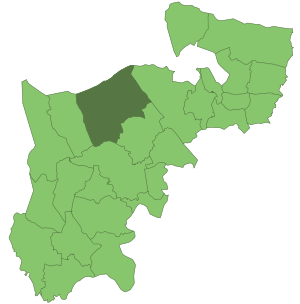 Harrow within Middlesex in 1961

The urban district gained the status of municipal borough on 4 May 1954 and the urban district council became Harrow Borough Council. The 50th anniversary of the incorporation as a borough was celebrated in April 2004, which included a visit by Her Majesty Queen Elizabeth II.

In 1965 the municipal borough was abolished and its former area was transferred to Greater London from Middlesex under the London Government Act 1963 to form the London Borough of Harrow. It is uniquely the only London borough to replicate exactly the unchanged boundaries of a single former district. This was probably because its population was large enough. According to the 1961 census it had a population of 209 080, making it the largest local government district in Middlesex.

The presence of Harrow School on the main 'hill' of Harrow has preserved the myth that it is an affluent, leafy area (recent house price averages on the hill were £1,500,000), but the affluence of the hill is now surrounded by typical north-west London suburbia of 1930s semi-detached houses and flats.

Some may consider it affluent in comparison to other similar areas of London but more recent studies are proving that there is increasing poverty. Crime figures are low; the borough had 2,618 notifiable offences in April 2009, compared with an average of 2,204 across London's boroughs.[3] Harrow Council is focusing regeneration efforts on areas such as Wealdstone and South Harrow and many new 'key service workers'-type flats are springing up. In the north part of the borough, there is a greenbelt strip of highly affluent housing in the areas of Northwood, Pinner and Stanmore.

Harrow is considered a borough of "contrasts", with high levels of affluence in such areas as Harrow-on-the-Hill, Pinner, and Stanmore and high levels of deprivation in Wealdstone and South Harrow. Save the Children reported in 2011 that over 7,000 children are living in poverty in the Borough.[4]

Its site on and near the greenbelt and ease of access to central London (20 minutes by train to Marylebone and 12 minutes to Euston via London Midland) makes Harrow a good place to live not only for families but affluent singles as well. Rising property prices in all London areas have helped to see a large increase in property redevelopment of its existing Edwardian and 1920s to 1940s housing stock, which in turn is attracting new residents looking for a clean, safe, and relatively green environment to live in, close to central London.

Harrow is a diverse borough, having 63.8% of its population from the BME (Black and Minority Ethnic) communities, with the largest group being of Indian ethnicity (specifically those from Gujarat and South India). The borough can also claim to have the largest concentration of Sri Lankan Tamils in the UK and Ireland as well as having the highest density of Gujarati Hindus in the UK.[5] Census data shows that the majority of Sri Lankan Tamils live in the areas of North Harrow, South Harrow and Rayners Lane. Indians are mostly in the eastern Kenton and Queensbury areas.

Wards with the highest white British population were:

The lowest wards meanwhile were:

Since 2005, on the last Sunday in June Harrow Council hosts Under One Sky - Harrow's largest festival, to celebrate and the joint communities of Harrow. This has a programme of dance, world music, sports activity, youth music, spoken word, free children's activity, a carnival parade, information and stalls, health promotion, a world food zone and outside radio broadcast.

Harrow is the most religiously diverse local authority area in the UK, with a 62% chance that two random people are from different religions, according to Office for National Statistics, October 2006.[6] According to the 2011 census 25.3% of Harrow's population identified themselves as Hindu - the highest in the UK. A large number of Jewish people live in Stanmore and Hatch End. The Stanmore and Canons Park Synagogue boasts the largest membership of any single synagogue in the whole of Europe.[7]

As per the 2011 census, Harrow has a larger than average Jewish, Hindu and Muslim population.

It was shown a national detailed Land Use Survey by the Office for National Statistics in 2005 that the London Borough of Harrow had the second highest proportion of land being domestic gardens: 34.7% of all 326 districts in England; this compared with the London Borough of Sutton's 35.1% (highest proportion nationally) and Bournemouth's 34.6%.[8]

The first and only contemporary artist-led gallery in Harrow was set up in 2010 by the Usurp Art Collective. The space is called the Usurp Art Gallery & Studios and is based in West Harrow, a bohemian part of Harrow. Usurp Art provides professional support to artists and runs the only public artists studios in the borough. It is a flagship project for Arts Council England.[9][10][11][12]

Major employers include Kodak,[13] the Royal National Orthopaedic Hospital and Ladbrokes, which has its headquarters in Harrow.[14]

The London Borough of Harrow has one League 2 football club: Barnet F.C., who moved to The Hive Stadium from the neighbouring London Borough of Barnet in 2013; and three non-League clubs: Wealdstone FC who play at The Vale, Harrow Borough F.C. who play at Earlsmead Stadium and Rayners Lane F.C. who play at the Tithe Farm Social Club. Five of the 30 cricket clubs which play in the Middlesex County Cricket League are based in the London Borough of Harrow: Harrow, Harrow St Mary's, Harrow Town, Kenton and Stanmore. Hatch End Cricket Club previously played at Shaftesbury playing fields in Hatch End but following an arson attack on their clubhouse and a subsequent failure to raise enough funds to build a new one, the club moved to Elstree in 2011.

Harrow also has a professional rugby league team, London Broncos, who compete in the Kingstone Press Championship, the second tier of British rugby league after being relegated from the Super League in 2014 after 20 consecutive seasons in the top tier. The Broncos play at The Hive Stadium the home of Barnet F.C..

Harrow is divided into 21 wards, each represented by three councillors on Harrow London Borough Council. After the most recent council elections, the borough is controlled by the Labour party. The number of councillors are as follows: Labour 34 Conservative 26, Independent 2, Liberal Democrat 1.[15]

The independent schools of the Borough are dominated by the presence of Harrow School and John Lyon School for boys and North London Collegiate School which consistently rank as among the best schools in the country. Notable independent primary schools include Orley Farm School and Reddiford School, both of which are co-educational.

Note: The figures for Sacred Heart High School are not included.

Source: Harrow Observer[19] The London Borough of Harrow claim that these are the latest figures available.

All of Harrow's pupils have the chance to be elected onto the Harrow Youth Parliament. This is a group of around 50 young people in the Borough who come together to work on projects that benefit other young people. They are also the official youth voice for the Council and are in constant communication with the Council on all youth matters.

Further information: List of districts in the London Borough of Harrow

The numerous National Rail, London Overground and London Underground stations in the borough are: