The London Borough of Hillingdon (

pronunciation (help·info)) is the westernmost borough in Greater London, England which had a population of 273,936 according to the 2011 Census.[4] It was formed from the districts of Hayes and Harlington, Ruislip-Northwood, Uxbridge, and Yiewsley and West Drayton in the historic county of Middlesex. Today, Hillingdon is home to Heathrow Airport and Brunel University, and is the second largest of the 32 London boroughs by area.

Hillingdon Council governs the borough, with its headquarters in the Civic Centre in Uxbridge. For administrative purposes, the borough is split into North and South Hillingdon. The south's former strong connection with industry has diminished since the 1980s to be replaced by a preponderantly residential suburban population; the north has remained a consistently residential suburban area. The borough's residential areas expanded with the extension of the Metropolitan Railway from Harrow on the Hill to Uxbridge in the early 20th century and the gradual establishment of stops along the line, becoming known as "Metro-land".

The borough was formed in 1965 from the Hayes and Harlington Urban District, Municipal Borough of Uxbridge, Ruislip-Northwood Urban District, and Yiewsley and West Drayton Urban District of Middlesex.[5] The councils involved were initially unable to decide upon a name, with Keith Joseph suggesting "Uxbridge" in October 1963, later revised to Hillingdon.[5]

The borough has been twinned with the French town of Mantes-la-Jolie and the German town of Schleswig since the Hayes & Harlington Urban District created the link in 1958.[8] The twinning programme was reviewed in 2011 and it was suggested that the link with Schleswig be ended owing to a lack of contact between the towns.[9] In December 2011, the borough decided instead to end the link with a second German town, Emden, citing administrative problems.[10] 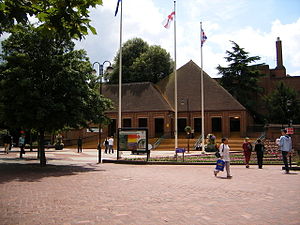 The London Borough of Hillingdon's Civic Centre in Uxbridge

The borough is governed by an elected council, known interchangeably by the full name and as Hillingdon Council.[12] It is split into wards represented by 65 Conservative and Labour councillors.[13] A cabinet and leader are elected annually.[14] The present leader of the council is Cllr. Ray Puddifoot MBE of the Conservative Party.[1] Elections for councillors are held every four years.[14]

A Mayor is chosen yearly by councillors; the role is largely ceremonial.[15] The present mayor is Councillor George Cooper, who was elected in May 2015.[2]

In the London assembly elections, Ealing and Hillingdon Borough form a geographical constituency with one member as there are eleven London-wide members, currently from the four biggest parties. Conservative candidate Richard Barnes won the 2000, 2004 and 2008 elections, and since the 2012 election the Labour candidate Onkar Sahota has served as the area's designated member on the London Assembly.

At the same election in 2012 Conservative mayoral candidate Boris Johnson won the largest share of Hillingdon's votes in becoming elected Mayor of London for a second term.

The borough comprises 17 main districts, several of which have neighbourhoods, communities or localities within them and one of which is historic:

52.2% of the borough's population identified themselves as White British in the 2011 census. Much of the ethnic diversity is in the south-east of the borough, in particular Hayes.

The wards where whites are not the largest race group are: 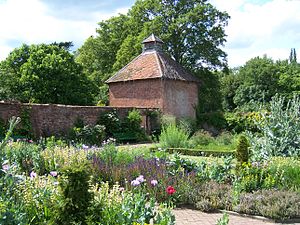 The borough maintains over 200 green spaces, totalling around 1,800 acres (730 ha).[20] As much of the area is within the Metropolitan Green Belt it was, in 2008, one of the least densely populated of all the London boroughs; open spaces range in size from the Colne Valley Regional Park by the River Colne in the north of the borough, to smaller gardens and parks such as the Norman Leddy Memorial Gardens and Lake Farm Country Park in the south of the borough.[21]

Council leader Raymond Puddifoot had given a promise that green-belt land in Hillingdon would be safe on his watch: 'I can give a categoric assurance that under this administration we will never see a threat to the green belt.'[22] In August 2012, however, Mr Puddifoot announced plans to build on green-belt (and longtime common land) site Lake Farm in the south of the borough.[23] Dismissing the discontent of residents in the south of the borough, the Conservative majority of the Council's planning committee peremptorily rubber-stamped the plans in March 2013.[24]

The Grand Union Canal passes through parts of the borough, including Hayes, Uxbridge, Yiewsley and West Drayton. Ruislip Lido was built as a feeder reservoir for the canal, but was eventually disconnected and changed to become a recreational lido. Two Sites of Special Scientific Interest next to the canal, Frays Farm Meadows and Denham Lock Wood, are managed by the London Wildlife Trust.

The borough owns four theatres: the Beck Theatre in Hayes (which is operated on behalf of the borough by HQ Theatres Limited),[28] the Compass Theatre in Ickenham, the Winston Churchill Theatre and Hall (part of the Manor Farm site) and the Open Air Theatre, Barra Hall Park in Hayes. 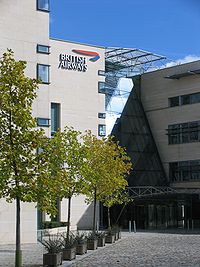 Waterside, the headquarters of British Airways in Harmondsworth

Hillingdon has a large economy by national standards, ranked 14th out of 408 local area districts in Britain, and ranked 5th out of the London boroughs.[21]

British Airways is headquartered in Waterside, Harmondsworth, in Hillingdon.[29] The building officially opened in 1998.[30] Prior to the opening of Waterside, the airline's head office was the Speedbird House at London Heathrow Airport.[31] An office of American Airlines is located at the Orient House (HAA3) within Waterside.[32]

In 2007 Cadbury Schweppes announced it would be moving to Uxbridge from Mayfair to cut costs.[33] The company later split and Cadbury plc moved to its new head office in Cadbury House in the Uxbridge Business Park in June 2008.[34]

British Midland International has an office in Stockley Close, West Drayton, Borough of Hillingdon.[37] In July 1999 Sir Michael Bishop formally opened the British Midland Training Centre, which is located in Stockley Close.[38] Hellenic Imperial Airways has its United Kingdom offices in the Axis House in Harlington in the London Borough of Hillingdon.[39] China Airlines has its UK office in the Hyde Park Hayes 3 (HPH3) in Hayes in the borough.[40]

In May 2011, Hillingdon Council received the Library Innovation of the Year award at the 2011 Bookseller Industry Awards.[45]

Also within the borough is Brunel University and Uxbridge College's Uxbridge and Hayes campuses. 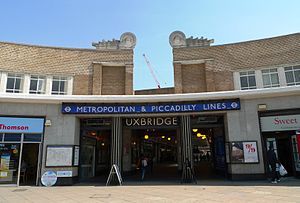 National Rail and London Underground stations in the borough are:

The council announced in June 2011 that it would be lobbying Transport for London to have the Central line extended from West Ruislip station to Uxbridge station. Such a project would require a business case approved by TfL and the completion of signal upgrade work on the Metropolitan line.[47]

The Royal Air Force station, RAF Northolt, is situated in South Ruislip near the A40 and the tube station. Most early RAF airfields were named after the nearest railway station; in this case Northolt Junction, the original name of South Ruislip station. The station has been redeveloped in recent years to house a number of additional military capabilities besides the RAF operations, and is popular with business people and politicians for private flights.[48]