The London Borough of Islington

i/ˈɪzlɪŋtən/ is a London borough in Inner London with an estimated population of 215,667.[2] It was formed in 1965 by merging the former metropolitan boroughs of Islington and Finsbury, but the merged entity remains the second smallest borough in London and the third smallest district in England. The borough contains two Westminster parliamentary constituencies, Islington North and Islington South & Finsbury. The local authority is Islington Council.

Islington was originally named by the Saxons Giseldone (1005), then Gislandune (1062). The name means 'Gīsla's hill' from the Old English personal name Gīsla and dun 'hill', 'down'. The name then later mutated to Isledon, which remained in use well into the 17th century when the modern form arose.[3] In medieval times, Islington was just one of many small manors in the area, along with Bernersbury, Neweton Berewe or Hey-bury, and Canonesbury (Barnsbury, Highbury and Canonbury - names first recorded in the 13th and 14th centuries). "Islington" came to be applied as the name for the parish covering these villages, and was the name chosen for the Metropolitan Borough of Islington, on its formation in 1899. On the merger with Finsbury, to form the modern borough this name came to be applied to the whole borough.

The borough includes the areas:

Islington Council is the borough's local authority. It is a London borough council, one of thirty-two principal subdivisions of the administrative area of Greater London. The council was created by the London Government Act 1963 and replaced two local authorities: Finsbury Metropolitan Borough Council and Islington Metropolitan Borough Council. The former Islington Metropolitan Town Hall, at the intersection of Upper Street and Richmond Grove, serves as the present Borough's council building.[4]

Islington forms part of the North East constituency for the London Assembly, represented by Jennette Arnold, also of the Labour Party.

Inmarsat has its head office in the borough.[8] 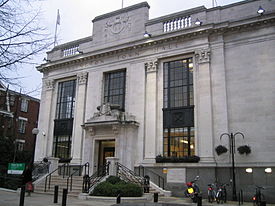 Islington has a wide variety of transportation services, with direct connections to the suburbs and the City and West End. Islington also has ten tube stations within its boundaries, with connections by the tube to all around London.

There are ten Underground stations in the borough:

These stations principally serve the Northern, Piccadilly and Victoria lines. Farringdon station is also served by the Circle, Hammersmith & City and Metropolitan lines.

There are also several London Overground stations in the borough. They are as follows:

There are several railway stations in the borough. They are as follows:

There are two prisons in Islington, a men's prison, HM Prison Pentonville and a women's prison HM Prison Holloway, which in the early 20th century was used to hold many suffragettes.

Cultural attractions and institutions in Islington 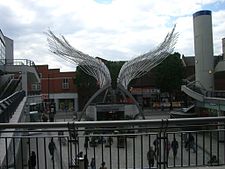 In 1801, the civil parishes that form the modern borough had a total population of 65,721. This rose steadily throughout the 19th century, as the district became built up; exceeding 200,000 in the middle of the century. When the railways arrived the rate of population growth increased — reaching nearly 400,000 by the turn of the century; with the Metropolitan Borough of Finsbury particularly suffering deprivation, poverty and severe overcrowding. The increase in population peaked before World War I, falling slowly in the aftermath until World War II began an exodus from London towards the new towns under the Abercrombie Plan for London (1944). The decline in population reversed in the 1980s, but it remains below its 1971 level.

According to the 2011 census, Islington has the highest population density of local authorities in England and Wales - 13,875 people per km2.[11]

Islington has the second highest proportion of Irish people in the country, behind London Borough of Brent.[12]

The London Borough of Islington is home to two higher education institutions:

Moorfields Eye Hospital is a major centre for postgraduate training of ophthalmologists, orthoptists, optometrists, and nurses.

There are two performing arts colleges. The Urdang Academy and the Musical Theatre Academy are both based in Islington.