The London Borough of Newham

i/ˈnjuːəm/ is a London borough formed from the former Essex county boroughs of West Ham and East Ham, within east London.

It is situated 5 miles (8 km) east of the City of London, and is north of the River Thames. Newham was one of the six host boroughs for the 2012 Summer Olympics and contains most of the Olympic Park including the Olympic Stadium. According to 2010 estimates, Newham has one of the highest ethnic minority populations of all the districts in the country, with no particular ethnic group dominating. The local authority is Newham London Borough Council, the second most deprived in England,[2] although other reports using different measures show it differently.[3] Indeed, Liverpool, Middlesbrough, Manchester, Knowsley, the City of Kingston-upon Hull, Hackney and Tower Hamlets are the local authorities with the highest proportion of LSOAs[jargon] amongst the most deprived in England.

The borough was formed by merging the former area of the Essex county borough of East Ham and the county borough of West Ham as a borough of the newly formed Greater London, on 1 April 1965. Green Street and Boundary Road mark the former boundary between the two. North Woolwich also became part of the borough (previously being in the Metropolitan Borough of Woolwich, in the County of London) along with a small area west of the River Roding which had previously been part of the Municipal Borough of Barking. Newham was devised for the borough as an entirely new name.[5]

Unlike most English districts, its council is led by a directly elected mayor of Newham. From 2002 to 2009 one of the councillors had been appointed as the "civic ambassador" and performed the civic and ceremonial role previously carried out by the mayor. The post has been discontinued.[6]

The borough is considered part of Outer London for purposes such as funding. This is because the majority of Newham was not part of the 1889–1965 County of London. The council is actively campaigning to have Newham officially considered part of Inner London in order to increase its level of government grant by £60 million.

At the borough elections held in 2014, the Labour Party won all 60 of the seats on the Council. Sir Robin Wales was re-elected as the borough's Executive Mayor with 61% of the first preference votes cast.

Newham has the youngest overall population and one of the lowest White British populations in the country according to the 2011 Census. The borough has the second highest percentage of Muslims in Britain at 32%.

When using Simpson's Diversity Index on 10 aggregated ethnic groups, the 2001 census identified Newham as the most ethnically diverse district in England and Wales, with 9 wards in the top 15.[7] However, when using the 16 ethnic categories in the Census so that White Irish and White Other ethnic minorities are also included in the analysis, Newham becomes the 2nd most ethnically diverse borough[8] with 6 out of the top 15 wards, behind Brent with 7 out of the top 15 wards.

Newham has the lowest percentage of White British residents of all of London's boroughs. The White British proportion of the population fell from 33.8% in 2001 to 16.7% in 2011; this decrease of 37.5 percentage points is the largest of any local authority in England and Wales between the two censuses.[11] The joint-lowest wards with White British population are Green Street East and Green Street West, both having 4.8% – the third lowest behind Southall Broadway and Southall Green in Ealing. East Ham North is closely followed, at 4.9%.[12]

The Borough is the education authority for the district providing education in a mix of Foundation, community and voluntary aided schools.[14] The borough also owns and operates Debden House, a residential adult education college in Loughton, Essex, and is home to the Rosetta Art Centre, a dedicated visual art organisation which delivers courses at its base in Stratford and produces participatory art projects, programmes and initiatives. The Essex Primary School in Sheridan Road with over 900 pupils is one of the biggest primary schools in London.

The University of East London has two campuses in Newham:

Birkbeck Stratford is a collaboration between Birkbeck, University of London and UEL to increase participation in adult learning. This is currently based on the UEL Stratford campus, but is planned to move to its own facilities. 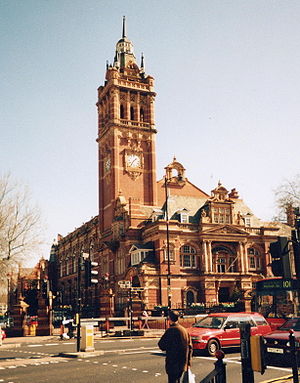 Canning Town Library was first opened in 1893 and still operates in the original building on Barking Road (albeit with repairs and a reconstructed interior following damage from air raids in 1940 and 1941). Its opening hours are Monday, Tuesday, Friday and Saturday: 9:30am–5:30pm, Wednesday and Sunday: Closed, Thursday: 9:30am–8:00pm.[16]

There are a number of local markets in the Borough, including Queens Market, which the Council is controversially seeking to redevelop. These proposals are being fought by Friends of Queens Market.

80 hectares within the borough are designated as part of the Metropolitan Green Belt. 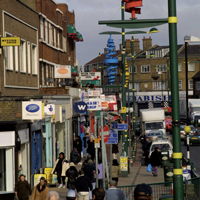 Green Street where the population is predominantly South Asian

The local newspaper is the Newham Recorder.[19]

Transport in Newham is undergoing a major upgrade, with the completed Docklands Light Railway and Jubilee Line Extension, with new or improved stations at Canning Town, West Ham and Stratford. Stratford International station on High Speed 1 opened in late 2009. The Crossrail scheme will also improve rail connections to several stations in the borough. The Docklands Light Railway was extended to serve London City Airport.