From Infogalactic: the planetary knowledge core
Jump to: navigation, search
Not to be confused with Epping Forest (district).

The London Borough of Waltham Forest is a London borough in North East London,[3] England.

The south of the borough contrasts markedly with the north (split by the North Circular Road) in terms of its mixed ethnicity and socio-economic indicators. Taken as a whole, Waltham Forest comprises built-up urban districts in the south with inner-city characteristics, and more affluent residential development in the north with a variety of reservoirs, open space, small sections of Epping Forest, parks, and playing fields, which together cover a fifth of the borough. It is located between Epping Forest District Council in the north, London Borough of Redbridge in the east, London Boroughs of Newham and Hackney in the south, and London Boroughs of Haringey and Enfield in the west (where the River Lea and the surrounding parkland forms a green corridor, traditionally separating north and east London). Waltham Forest was one of the six London boroughs that hosted the 2012 Summer Olympics. The local authority is Waltham Forest London Borough Council. The borough includes one of the highest ethnic minority populations in Europe, consisting mostly of Eastern European and Black British, but it has also an established British Pakistani residential settlement and business.

A petition opposed calling the new borough "Walthamstow", so perhaps for that reason the new borough took its name from the former Waltham Forest, an institution responsible for managing deer in an area that stretched eastwards from the River Lea and included large areas of agricultural land as well as the wooded areas subsequently known as Epping Forest and Hainault Forest.

The southern part of Epping Forest still extends into the south of the borough, 90% of it having been preserved by Epping Forest Act of 1878. This not only assisted in preserving the forest but also helped develop the towns around it: Chingford, Forest Gate, Walthamstow, Leytonstone, and Leyton. The area's location between the City of London and Epping Forest encouraged[when?] large-scale urban development.

The area now known as Waltham Forest experienced at least two Zeppelin raids during World War I. On 17/18 August 1915, Airship L10 took a route roughly following the Gospel Oak to Barking railway line, dropping incendiary and high-explosive bombs. The first bomb, an incendiary, fell on Hoe St, Walthamstow, at the junction of Orford and Queens Road; the last was dropped in Aldersbrook area. Ten people were killed in Leyton and another 48 injured across the wider area. On 23/24 September 1916 the German Navy airship L 31 dropped around ten bombs along the line of Lea Bridge Road, Leyton, killing eight there. She also dropped bombs on Streatham and Brixton the same night.

The main centres of population in the borough are Chingford in the north, Walthamstow in the centre (and the administrative hub including the council offices) and Leyton and Leytonstone to the South. Waltham Forest has the fifth largest Muslim population in England and the third largest in London (coming after its neighbouring boroughs, Newham and Tower Hamlets).

Historically known as the seat of the Arts and Crafts Movement under the stewardship of William Morris, Waltham Forest has continued to succour many contemporary artists & art groups. These include the North East London Independent Artists (NELIA) group, based at the Changing Room Gallery in Lloyd Park, the 491 Gallery in Leytonstone, and a number of independent artists, also mainly in the Leytonstone area. The annual E17 Art Trail, which includes open studios, exhibitions and events, is the biggest art event in the borough, and there is now a similar event in Leytonstone. Eamon Everall, founder member of the Stuckism art movement is a long-time resident in the borough where he also maintains a studio.[4]

Waltham Forest is home to a number of musicians that have found success in the UK, including East 17, Blazin' Squad, and Indie band Hefner, who formed in Walthamstow. The borough is also a centre of the grime musical genre; grime acts hailing from the borough include More Fire Crew, Lethal Bizzle, and Jammer amongst others.

The only theatre in the borough, The Waltham Forest Theatre, was situated in Lloyds Park. Though a local campaign was launched to save it in 2008 [5] the theatre was demolished in 2011.

Waltham Forest was one of six local authorities to set up a Housing Action Trust under the Housing Act 1988. The Waltham Forest HAT covered various estates in need of regeneration: Cathall Road in Leytonstone, Oliver Close in Leyton, Boundary Road in Walthamstow and Chingford Hall in Chingford. The HAT transferred its redeveloped estates to Community-based Housing Association and shut down in April 2002. English Partnerships then demolished four empty tower blocks.[6]

The remaining Council housing in the borough is now managed by an arms-length management organisation, Ascham Homes.[7]

Waltham Forest was one of four host boroughs in east London for the 2012 Olympics. The northern part of the Queen Elizabeth Olympic Park is located in Eton Manor. The borough hosted events in its three Olympic-size swimming pools, one synchronised swimming pool and one water polo pool. These pools were used for athlete training.

During the Paralympic Games, Eton Manor hosted the Wheelchair Tennis events, with temporary seating for 10,500 spectators.

In April 2012, the Ministry of Defence identified the roof of Fred Wigg Tower as a potential location for surface-to-air missile defences during the Games.[8]

Waltham Forest has a number of institutes, including 3 colleges of further education. The most famous is Leyton Sixth Form College, which is the second sixth form college in Southern England to get a licence,[9] and it is well known as the best college in London for sport.[10]
Others include Waltham Forest College and Sir George Monoux College.

The Central line of the London Underground serves the south of the borough, running alongside the A12 road with stations at Leyton and Leytonstone. The Victoria Line runs roughly through the middle of the borough with stations at Walthamstow Central and Blackhorse Road. The Gospel Oak to Barking Line of London Overground has stations at Walthamstow Queens Road, Blackhorse Road, Leyton Midland Road and Leytonstone High Road. The London Overground (TfL) also runs services from Liverpool Street station in the City of London and serves stations at St James Street, Walthamstow Central, Wood Street, Highams Park and Chingford.

There is one police station in Chingford and one office in Walthamstow Town Centre, and a number of additional patrol centres throughout the borough. 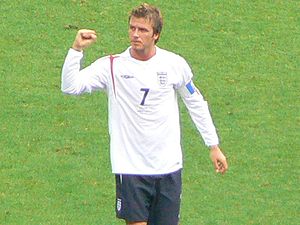 Waltham Forest is the birthplace of William Morris, best known as one of the principal founders of the British Arts and Crafts Movement. Morris was a designer of wallpaper and patterned fabrics, a writer of poetry and fiction, and a pioneer of the socialist movement in Britain.

Other notable people, such as footballer and former England Captain David Beckham, I, Claudius star Derek Jacobi, former Essex and England cricket Captain Graham Gooch, and the film director and producer Alfred Hitchcock, were also born in the borough. The heavy metal band Iron Maiden was formed in Leyton, and Eastenders actress Rita Simons was born in Leytonstone. The poet Pascale Petit, shortlisted three times for the TS Eliot poetry prize, lives in Walthamstow. Notable Grime Artist Lethal Bizzle is from Walthamstow, and Grayson Perry, the 2003 Turner Prize-winning artist, has his studio in Walthamstow.

The London Borough of Waltham Forest is twinned[12] with:–

Friendship Links have also been established with: