London Colney is a village and civil parish in Hertfordshire, England. It is located to the north of London, at Junction 22 of the M25 motorway.

It is near St Albans and part of the St Albans District. At the time of the 2001 census the population of London Colney ward was 7,742. It is considered a satellite or dormitory village of St Albans, where some villagers travel to work and shop.

The civil parish was formed in 1947 from part of St Peter Rural.

London Colney Primary School was initially due to open on September 4, 1939. It was then closed on the same day, as war was declared. It opened properly a day later.

In the early morning of 12 May, 1941, a German spy, Karel Richter, descended by parachute near London Colney. Richter buried his equipment and hid for a couple of days. Driven out by hunger (he had mistakenly buried his food parcel as well), Richter was approached by two lorry drivers who asked him the way to London. Suspicious of Richter's non-committal reply and foreignness, the lorry drivers then approached Constable Alec Scott and mentioned the strange man. Scott found Richter who asked to be taken to a hospital as he was feeling unwell. Scott called his superiors who quickly sent a car to pick up Richter and take him to jail.[2]

London Colney has a great selection of open water fishing in the River Colne and associated lakes.

The village was on the boundary of the 1860s London Coal Tax area; two posts still stand. 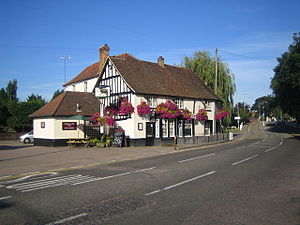 The village also has several estate agents, a motorcycle showroom, a tattooist, several take aways, hairdressers, supermarkets, one incorporating a post-office, a tanning salon, turf accountant. There is also a retail park which contains a J. Sainsbury's a Marks & Spencer's, Next, Boots, Monsoon and TK Maxx. There are several doctors practices and a library.

Associated with the village there are walks, nature reserves and gravel ponds.The Mosquito Aircraft Museum, now known as the de Havilland Aircraft Museum, established in 1959, is located at Salisbury Hall on the south side of the M25 motorway. 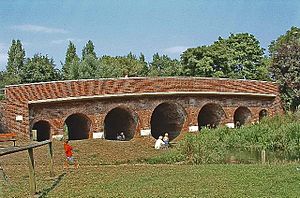 Telfords Bridge, over the River Colne

The High Street crosses the River Colne (a tributary of the Thames joining at Staines-upon-Thames) at the multi-arched brick-built Telfords Bridge (a Grade II listed building). The original fording point can still be seen on the Western side of the bridge, with the Bull and Green Dragon pubs conveniently situated on opposite sides of the ford. Nearby flooded gravel pits form a nature reserve for wild birds. The A6 used to pass through the village. The bypass was built in 1959, to join with the A414 at the north end of the village. The A6 became the A1081.

The actor Philip Madoc lived in the village for a number of years.[4]

A minor scandal occurred in 2005, when local resident Jake 'the Snake' Roberts was convicted of cruelty to animals after not feeding his pet snake. The story appeared in the Herts Advertiser newspaper, and noted that the former WWE wrestler lived in Whitehorse Lane.

London Colney Parish Council publishes a magazine three times per year, called The London Colney News. The magazine has been produced continuously since 1984.

London Colney has one of the fastest growing Scouting group within the St Albans District www.1stlondoncolney.co.uk