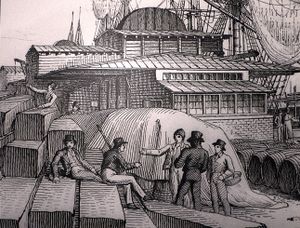 At the London Dock in the 1820s, the Customs employed around 250 men and the Excise around 200.
File:London docks c1909.jpg
Port wine from Oporto being unloaded on a London Docks quayside, circa 1909.

The London Docks were one of several sets of docks in the historic Port of London. They were constructed in Wapping downstream from the City of London between 1799 and 1815, at a cost exceeding £5½ million.[1]

Traditionally ships had docked at wharves on the River Thames, but by this time, more capacity was needed. They were the closest docks to the City of London, until St Katharine Docks were built two decades later.

The London Docks occupied a total area of about 30 acres (120,000 m²), consisting of Western and Eastern docks linked by the short Tobacco Dock. The Western Dock was connected to the Thames by Hermitage Basin to the south west and Wapping Basin to the south.

The Eastern Dock connected to the Thames via the Shadwell Basin to the east. The principal designers were the architects and engineers Daniel Asher Alexander and John Rennie.

The docks specialised in high-value luxury commodities such as ivory, spices, coffee and cocoa as well as wine and wool, for which elegant warehouses and wine cellars were constructed. In 1864 they were amalgamated with St Katharine Docks. The system was never connected to the railway network. Together with the rest of the enclosed docks, the London Docks were taken over by the Port of London Authority in 1909.

After containerisation of commercial shipping

The docks were closed to shipping in 1969 and sold to the borough of Tower Hamlets. The western portion of the London Docks was filled in with the (unrealised) intention of turning them into public housing estates. The land was still largely derelict when it was acquired in 1981 by the London Docklands Development Corporation (LDDC). It was subsequently redeveloped with over 1,000 individual properties centred on the old Tobacco Dock and Shadwell Basin.

The controversial "Fortress Wapping" printing works of Rupert Murdoch's News International corporation was constructed on the northern half of the infilled Western Dock. Hermitage Basin and Shadwell Basin survive. Wapping Basin is now a sports pitch and some of the Eastern Dock site is open space. A small canal runs across the southern part of the Western Dock site from Hermitage Basin to Tobacco Dock.