The London Irish Rifles (LIR) was a volunteer rifle regiment of the British Army with a distinguished history, and now forms 'D' (London Irish Rifles) Company of the London Regiment and is part of the Army Reserve. They are based at Connaught House, Flodden Road in Camberwell.

During the Second Boer War, the battalion sent eight officers and 200 private soldiers for active service. One officer won the Distinguished Service Order (DSO) and another member gained seven bars to his South Africa Medal. In recognition of their service, the London Irish was granted their first battle honour, "South Africa, 1900-1902".

During the First World War, the LIR raised three Battalions, one of which stayed in reserve in England. The 1st Battalion was sent to France in 1915 and saw its first action at Festubert in May, before taking part in many of the major battles on the western front during the next three years. The 2nd Battalion served in France, Greece and Palestine.

At the Battle of Loos, the 1st Battalion LIR particularly distinguished itself. While storming across No-Man's Land to capture the enemy trenches, Rifleman Frank Edwards, the Captain of the football team, kicked a football along in front of the troops. This earned the LIR probably their most famous Battle Honour - "Loos, 1915". The Loos football is still preserved in the Regimental Museum, and to this day, the memory of Rifleman Edwards and his comrades is commemorated every year at Connaught House on Loos Sunday.

Over 1000 London Irishmen were killed during the conflict. 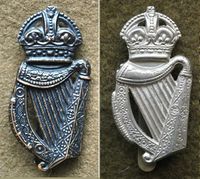 After the cessation of hostilities, the LIR was reduced to cadre strength, before being disbanded in May 1919 at Felixstowe. In February 1920, the 18th (County of London) Battalion of the London Regiment (London Irish Rifles) was reconstituted as a component of the 47th (2nd London) Infantry Division of the new Territorial Army, and in 1923, the designation of the Regiment was shortened to 18th London Regiment (London Irish Rifles).

In 1937, when the London Regiment was disbanded, the LIR became known as London Irish Rifles, the Royal Ulster Rifles. After the 47th Division was also disbanded, the London Irish transferred to the 169th (3rd London) Infantry Brigade, part of 56th (1st London) Infantry Division.[1] Permanent staff were all seconded or attached from the RUR, but up to 1937, the Regimental Sergeant Major was normally found by the Irish Guards. The London Irish was one of the first Territorial units to start mechanisation by drawing up two "Commer" trucks.

The Regiment's piper-green head-dress, the Caubeen, which was worn by all Irish regiments, and was characterised by being sloped to the left instead of the right — only the LIR and Liverpool Irish having theirs sloping on the left - was adopted for wear by all ranks in 1937 in place of the service dress cap.

Infantry of 2nd Battalion, London Irish Rifles, part of 38th (Irish) Brigade of 78th Division, move forward through barbed wire defences on their way to attack a German strongpoint on the southern bank of the River Senio, Italy, 22 March 1945.

The 70th (Young Soldiers) Battalion, a Young Soldiers company of the London Irish Rifles, was also formed early in 1940, and set up for men volunteering who were between the ages of eighteen and nineteen and a half. The objective was to train them to the highest standard of drill, skill-at-arms, discipline and turnout in preparation for the time when they would be fit to take their place within the 1st and 2nd battalions. The 70th (Young Soldiers) Battalion ceased to exist in January 1943, when all such units were disbanded.

A company of the 1st Battalion was involved in the Battle of Graveney Marsh, in September 1940 the last ground combat between a foreign invading force and British troops that happened on British mainland soil.[2][3]

In the month that they spent fighting in the Anzio beachhead, the 1st Battalion's casualties totalled 32 officers and 550 other ranks killed, wounded and missing. When embarking for rest at Pozzuoli near Naples, the battalion numbered just 12 officers and 300 other ranks, some of which had returned from hospital to rejoin the battalion.

During the action at Anzio, the following awards were issued;

The 2nd Battalion formed part of the 38th (Irish) Brigade, initially as part of 6th Armoured Division and later within the 78th Battleaxe Division, a division with an excellent reputation, and was in front line service from November 1942 to May 1945 throughout Tunisia and Italy including taking part in major actions at Bou Arada, Heidous, Centuripe, Termoli, Sangro River, the Liri Valley, Trasimeno, Monte Spaduro and at the Argenta Gap. The battalion garrisoned parts of Austria in the immediate post war period.

Over 600 London Irishmen were killed during the conflict.

The LIR moved from their historic home, Duke of York's Barracks, Chelsea to Flodden Road, Camberwell in 2000. In 2007 they opened a detachment for 13 Platoon at the TA Centre on Hammersmith Road in Hammersmith, but that venture proved unsuccessful and the Irish withdrew again in 2008. On 9 June 2012, during the Diamond Jubilee Freedom Parade held by the Royal Borough of Kensington & Chelsea for units holding Freedom of the Borough, the London Irish formally co-located with B Detachment of 256 (City of London) Field Hospital at their TA Centre at 1a Iverna Gardens, Kensington. This marked a return to the Borough for the London Irish Rifle, 14 years after leaving the Duke of York's HQ in Chelsea and the intention to recruit locally to build up a Platoon in the first instance. It is anticipated that there will be synergies to be exploited by having infantry and the various Field Hospital cap badges occasionally doing joint training on Training Nights.

On 4 October 2008, the LIR were given the freedom of the Royal Borough of Kensington and Chelsea in a ceremony at the Town Hall Kensington. This followed a march, with bayonets fixed, and review along Kensington High Street.

Their distinctive piper-green head-dress is called a Caubeen. The Caubeen was first worn by the Pipers of the Irish Guards. However, the London Irish Rifles were the first unit to adopt for wear by all soldiers. It was subsequently adopted for wear by all Irish infantry regiments, with the exception of the Irish Guards. In contrast to the rest of the British Army, the London Irish Rifles have the distinction of wearing the cap badge over the right eye and the Caubeen is pulled over the left ear.

The London Irish Rifles are also issued with a rifle green beret for use on exercise and/or on operations. The beret was approved for wear by the Army Dress Committee in 2001 and was first worn on operations in 2004.

4 Report on the London Irish Rifles parade to commemorate the 70th anniversary of the Battle of Graveney Marsh http://www.irishbrigade.co.uk Click on news/articles