The London Majors are an independent, minor league baseball team of the semi-pro Intercounty Baseball League. The team was founded in 1925, and is based in London, Ontario. They play their home games at the 5,200 seat Labatt Memorial Park. 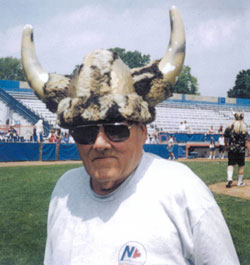 Norm Aldridge at Labatt Park in May 1998 during the fundraising ballgame, The Rumble at the Riverforks. Aldridge, trainer with the 1948 Majors, also has a baseball diamond named after him in northeast London, Ontario -- Norm Aldridge Field.

Fort Wayne had gained renown by losing one game in 15 tournaments played during the previous two years.

The Majors won the opener on September 21, 1948, at Labatt Park when Joe Bechard's single in the 11th inning scored Johnny Lockington from second with the winning run in an 8-7 victory. Three times in the game Bechard had knocked in a run tying the game for London. It was "the greatest display of clutch hitting ever seen in the local ball yard," wrote Free Press sports editor Jack Park.

Fort Wayne went up 3-2 in the best-of-seven series but London pitcher Tommy White threw a five-hitter and Bechard hit a grand slam in a 13-1 London win in Game 6. White returned to the mound the next day and allowed five hits but blanked the Electrics 5-0 to give London the championship and post his third win of the series.

The 1948 London Majors team is considered to be one of the best amateur men's baseball teams of all time[citation needed] and have been inducted into the London Sports Hall of Fame at Budweiser Gardens.

Additionally, the London Army Team won the Canadian Sandlot title in 1943 and 1944.

Traditionally, one of the high points in the season of the London Majors is the double-header with the Toronto Maple Leafs on July 1 (Canada Day), which is usually followed by fireworks over the adjacent forks of the Thames River. Another high point is during the first weekend in August when the London Balloon Festival is held in Harris Park, across the river from Labatt Park. Watching the Majors play while 25-or-so hot-air balloons take flight against the backdrop of the city's skyline, personifies the idyllic dog days of summer.

In 1950, pitcher Ted Alexander joined the Majors. Previously, Alexander had been a star pitcher for a total of 14 seasons with the Homestead Grays and the Kansas City Monarchs of the Negro National League. Alexander left the Majors part way through the 1951 season, during which the Majors won the Intercounty title with star pitchers, Bill and Stan Slack. The Majors also won the Intercounty title in 1956 with former New York Yankee/ Pittsburgh Pirate outfielder Frank Colman as the owner of the team.

Eddie, who has played at first base, second base and the outfield during his 34-year playing career in the Intercounty League, was a key member of the 1975 Majors when they won the Intercounty title, the last year that the team has won the league championship.

In 2004, the London Majors made it to the best-of-seven championship IBL series with the Guelph Royals, but were defeated four games to one. After the 2004 season, the Majors moved out of the Roy McKay Clubhouse, pending interior renovations to the historic structure, and into the dressing room under the third-baseline grandstand, a dressing room previously used by the London Tigers (1989–1993), the London Werewolves (1999–2001) and the London Monarchs (2003).

After buying the London Majors prior to the 2004 season, in October, 2005, team owner Scott Dart brought his friend and former veteran London Majors' outfielder, Roop Chanderdat, in as team co-owner with Chanderdat also assuming the duties of general manager.

On January 14, 2006, it was announced in The London Free Press that the Majors had become an international organization with 11 scouts in Latin America, the U.S., Mexico, Italy and Japan.

On June 24, 2006, the National Post featured a lengthy two-page story by John Lott in its sports section titled, Safe at Home, How Love and Medicine Rescued a Life from a Mysterious Illness, about Harry Muir's brush with death in 2005, on the front page of its sports section.

The Majors also led the league in batting during the regular season with an overall team average of .305.

Rudy Vallejos, an outfielder with the 2006 London Majors, won the Intercounty Baseball League Rookie of the Year (Brian Kerr Memorial Trophy). Vallejos enjoyed a productive first season in the IBL, hitting .304 with two homers and 41 RBI. The Ottawa, Ontario, native also hit five doubles, scored 28 runs and was fourth in the league with 19 stolen bases in 30 games.

The 2006 London Majors fared well in the Intercounty playoffs, dispatching the Kitchener Panthers in four straight games and the defending IBL champions and pennant winners, the Barrie Baycats in five games.

In the final series, however, the Majors were defeated four games to one by the Brantford Red Sox, who won their first Intercounty title since 1981 on August 25, 2006, in Brantford.

In 1974, after Denny McLain had retired from the major leagues two years earlier, McLain played a season for the London Majors. Due to arm problems, however, McLain only pitched nine innings for the Majors, but did play in 14 games at either shortstop, first base and catcher and batted .380, including hitting two homers in one game in London.

In 1984-1985 after Fergie Jenkins retired from Major League Baseball in 1983, he pitched for the London Majors, commuting from one of his homes near Chatham, Ontario.

The circa-1937, tongue-and-groove clapboard Majors' clubhouse at Labatt Park, officially renamed "The Roy McKay Clubhouse" on August 1, 1996 (Roy McKay was born on August 1), by longtime Majors' owner-player Arden Eddie, was designated under Part IV of the Ontario Heritage Act in 1996—an initiative spearheaded by The Friends of Labatt Park—by amending the park's original (by-law) reasons for designation. The one-storey, cottage-style building is owned by the City of London and is one of the few remaining clubhouses of its kind remaining in North America still being used for the purpose for which it was built.

On May 31, 1998, a fundraising ballgame ("The Rumble at the Riverforks") between the members of London city council, the media and the London Majors old-timers was held to help defray the costs of a new cedar-shingle roof on the Roy McKay Clubhouse. The game was organized by Arden Eddie, The Friends of Labatt Park, SCENE magazine and the London Majors.

Tom (Tim) Burgess also played for the 1945 Majors as a pitcher-outfielder and was signed to a pro contract in 1946 by the St. Louis Cardinals' organization. After years in Major League Baseball as either a player or coach, Burgess was inducted into the Canadian Baseball Hall of Fame in 1991.

The London Majors Baseball Club was owned by player-coach Arden Eddie from 1976 until February 2004, when Eddie and his wife Shelley sold the team to London businessperson/ mortgage consultant Scott Dart.

Eddie, who holds four Intercounty League records—most games played (834); most stolen bases (179); most hits (764) and most bases on balls (668) -- first started playing for the London Majors in 1967 after moving to London from his hometown of Wallaceburg, Ontario, where he has been inducted into the Wallaceburg Sports Hall of Fame.

Frank Colman first played for the Majors in the mid-1930s. In 1936, he was a top Intercounty League pitcher and hitter, winning the league batting title and MVP award, which soon led to a pro contract. In 1941 and 1942, Colman played for the Toronto Maple Leafs of the International League. In 1942, he signed as an outfielder with the Pittsburgh Pirates. He remained with the Pirates as a first baseman-outfielder until late in the 1946 season when he signed with the New York Yankees. In 1949 and 1950, Colman played for Seattle of the Pacific Coast League, before returning to play for the AAA Toronto Maple Leafs in 1951 as player-coach.

In 1954, Colman returned to his hometown of London, Ontario, signing on as player-manager with the London Majors, then owned by team general manager Clare Van Horne. In 1955, Colman purchased the Majors from Van Horne and co-founded the Eager Beaver Baseball Association with London sportsman Gordon Berryhill and Al Marshall. Colman's Majors won the Intercounty title in 1956.