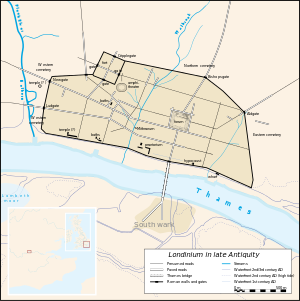 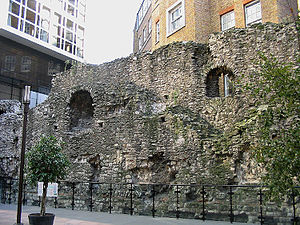 Fragment of the wall at Cooper's Row

London Wall was the defensive wall first built by the Romans around Londinium, their strategically important port town on the River Thames in what is now the United Kingdom, and subsequently maintained until the 18th century.

It is now the name of a road in the City of London running along part of the course of the old wall between Wormwood Street and the Rotunda junction where St. Martin's Le Grand meets Aldersgate Street. Until the later Middle Ages the wall defined the boundaries of the City of London.

Construction of the Roman wall

The wall appears to have been built in the late 2nd or early 3rd century, certainly between 190 and 225, and probably between 200 and 220.[1] This was around 80 years after the construction in 120 of the city's fort, whose north and west walls were thickened and doubled in height to form part of the new city wall. It continued to be developed until at least the end of the 4th century, making it among the last major building projects undertaken by the Romans before the Roman departure from Britain in 410.

Although the exact reason for the wall's construction is unknown, it may have been connected to the invasion of northern Britain by Picts who overran Hadrian's Wall in the 180s.[2] Alternatively, many historians link the building of London Wall with the political crisis that had emerged in the 190s when two men – Septimius Severus, and the governor of Britain Clodius Albinus – claimed the right to succession as emperor. The wall may have been constructed on the orders of Albinus in the 190s, who, in a power struggle with his rival, may have felt the need to protect his capital. Septimius eventually defeated his rival in 197.

Along with Hadrian's Wall and the road network, the London Wall was one of the largest construction projects carried out in Roman Britain. The wall was constructed largely from Kentish ragstone brought by water from Maidstone. It has been calculated that some 1,300 barge journeys would have been required to transport the 85,000 tons of stone from Kent. Once built, the wall was 2 miles (3.2 kilometres) long, enclosed an area of about 330 acres (130 ha), and was 6 to 9 feet (2 to 3 m) wide and about 20 feet (6 m) high.[3] It had a ditch or fossa in front of the outer wall, measuring some 6 feet (2 m) deep by between 9 and 15 feet (3 to 5 m) wide. It included a number of bastions (at least twenty-two) spaced about 70 yards (64 m) apart, on the eastern section of the wall.[4]

The economic stimulus provided by the wall and Septimius's campaigns of conquest in Scotland appear to have revived Londinium's fortunes somewhat in the early 3rd century.[citation needed].

The wall had a number of gates giving access to Roman roads that led to other towns. The original gates, clockwise from Ludgate in the west to Aldgate, in the east were: Ludgate, Newgate, Cripplegate, Bishopsgate and Aldgate. Aldersgate, between Newgate and Cripplegate, was added around 350,[5] and Moorgate, between Cripplegate and Bishopsgate, was built later still, in the medieval period. These bring the number of gates up to the canonical seven, commemorated in London tradition and literature. Some of the gates, though now long gone, are remembered by the areas or roads where the gates stood being named after them. Because of the rapid growth of the city, the number of gates was increased to cope with the extra traffic in the medieval period, and the walls were also strengthened and built upon.

The boundaries of the City of London ceased to coincide with the old city wall as the city expanded its jurisdiction slightly during the medieval era. The city's jurisdiction expanded westwards, crossing the historic western border of the original settlement – the River Fleet – along Fleet Street to Temple Bar. The city also took in the other "city bars," toll gates which were situated just beyond the old walled area: Holborn Bar, Smithfield Bar, and Whitechapel Bar. These were the important entrances to the city and their control was vital in maintaining the city's special privileges over certain trades.

The seven gates to the City of London, with many repairs and rebuilding over the years, stood until they were all demolished between 1760 and 1767.[6]

(Not to be confused with the seven City Wall gates and the four bars are the 13 water-gates on the Thames, where goods were unloaded from ships, such as Billingsgate, Bridge Gate and so on. There was also Tower Gate, a postern gate at the Tower of London, for pedestrians only.[7])

In the late 3rd century, Londinium was raided on several occasions by Saxon pirates. This led, from around 280 onwards,[5] to the construction of an additional riverside wall.

Later use and remains

The wall remained in active use as a fortification for more than 1,000 years. It was used to defend London against raiding Saxons in 457[citation needed], and was redeveloped in the medieval period with the addition of crenellations, more gates and further bastions. It was not until as late as the 18th and 19th centuries that the wall underwent substantial demolition, although even then large portions of it survived by being incorporated into other structures. Amid the devastation of the Blitz, some of the tallest ruins in the bomb-damaged City were remnants of the Roman wall.

The wall's moat has also left its mark on London; it forms the line of the street of Houndsditch. This was once London's main rubbish disposal site and was notorious for its appalling odour; its name, according to the 16th-century historian John Stow, was derived "from that in old time, when the same lay open, much filth (conveyed forth of the City) especially dead dogges were there laid or cast." The moat was finally covered over and filled in at the end of the 16th century, becoming the present street.

During the Great Fire of London in September 1666, almost all of the medieval City of London inside the wall was destroyed.

Today all that remains of the wall are a few (albeit substantial) fragments, some of which can be seen in the grounds of the Museum of London, in the Barbican Estate and around Tower Hill. A section near the Museum of London was revealed at Noble Street, after the devastation of an air raid on 29 December 1940 at the height of the Blitz. Another visible section is at St Alphage Gardens, and other sections form part of the walls or foundations of modern buildings and are only visible from inside those buildings. One of the largest and most readily accessed fragments of the wall stands just outside Tower Hill tube station, with a replica statue of the Emperor Trajan standing in front of it.

In 1984 the Museum of London set up a Wall Walk from the Tower of London to the museum, using 23 tiled panels.[8] A number of these have been destroyed in subsequent years.[9] At Noble Street, the panels were replaced by etched glass panels. These were intended as a prototype for new panels along the entire walk, but no further replacements have been made.

Part of the route originally taken by the northern wall is commemorated, although now only loosely followed,[10] by the road also named London Wall, on which the Museum of London is located. The modern road starts in the west with the Rotunda junction at Aldersgate, then runs east past Moorgate, from which point it runs parallel to the line of the City Wall, and eventually becomes Wormwood Street before it reaches Bishopsgate. This alignment, however, is the result of rebuilding between 1957 and 1976.[11] Before this, London Wall was narrower, and ran behind the line of the City Wall for its entire length, from Wormwood Street to Wood Street.[12] The western section is now St Alphage Garden.

Within and Without the Wall

The suffix words "Without" and "Within" denote whether an area of the City – and usually applied to the wards – fell outside or within the London Wall, though only Farringdon and (formerly) Bridge have been split into separate wards this way (Bridge Without falling beyond the gates on London Bridge). Some wards – Aldersgate, Bishopsgate and Cripplegate – cover an area that was both within and outside the wall and, although not split into separate wards, often the part (or "division") within the Wall is denoted (on maps, in documents, etc.) as being "within" and the part outside the Wall as being "without". Archaically "Infra" (within) and "Extra" (without) were also used[13] and the terms "intramural" and "extramural"[14][15] are also used to describe being within or outside the walled part of the city.

Similar are the names of some churches and parishes near a city gate, such as St Audoen within Newgate or St Botolph-without-Bishopsgate.