Originally called the Commercial Railway, the London and Blackwall Railway (L&BR) in east London, England ran from Minories to Blackwall via Stepney, with a branch line to the Isle of Dogs, connecting central London to many of London's docks. It was operational from 1840 until 1926 (for passengers) and 1968 (for goods), closing after the decline of inner London's docks. Much of its infrastructure was reused as part of the Docklands Light Railway. The L&BR was leased by the Great Eastern Railway in 1866, but remained independent until absorbed into the London and North Eastern Railway at the 1923 Grouping.[1] 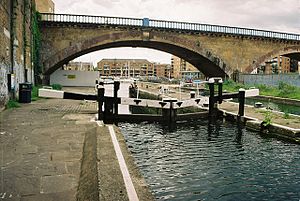 Original bridge at Limehouse on the London and Blackwall Railway. It now carries a branch of the DLR. The iron fencing was a feature of the line and was popular with passengers as it gave a quieter ride than the brick walling of the nearby London and Greenwich Railway[2]

It was authorised by an Act of Parliament entitled "An Act for making a Railway from the Minories to Blackwall, with Branches, to be called "The Commercial Railway" dated 28 July 1836 in the reign of William IV. The length of the railway was to be 3.25 miles (5.23 km).[3]

The engineer of the line was intended to be John Rennie, but the project’s City financiers favoured Robert Stephenson, believing that they would also benefit from the knowledge and wisdom of his respected father George. Although, because of the Act, Robert Stephenson had to follow Rennie’s route and use the obscure track gauge of 5 ft 1⁄2 in (1,537 mm),[4][5] he was free to choose his own method of propulsion. Drawing on his experience with the Camden Incline on the London and Birmingham Railway he decided upon cable haulage from stationary steam engines.

The railway was on brick arches as far as the West India Docks, and then on an embankment before entering a shallow cutting near the Blackwall terminus at Brunswick Wharf. The station there had an iron-roofed shed, and offices designed in an Italianate style by William Tite.[6]

The line opened on 6 July 1840, and the company changed its name to the London and Blackwall Railway on completion of an extension to Fenchurch Street, just within the City boundary, in 1841. A line from Stepney (now Limehouse) linking it with the Eastern Counties Railway at Bow was opened in 1849, known as the London and Blackwall Extension Railway (LBER), at which time the line was converted to steam locomotive operation and the track converted to 4 ft 8 1⁄2 in (1,435 mm) standard gauge. Agreement between the L&BR and the ECR about operation of the services over the LBER could not be reached so the actual junction was not completed. An interchange station called Victoria Park and Bow was opened but the ECR stopped few services there so most services terminated at Bromley and Bow. Services were withdrawn from Victoria Park and Bow on 6 January 1851.

By 1854 relations between the two companies had improved and the junction between the two lines was built and the LBER became part of the initial London Tilbury and Southend (LTSR) route to Fenchurch Street.[7] [Note 1]

It was joined to the new London, Tilbury and Southend Railway at Gas Factory Junction in 1858, allowing that company’s trains to run into Fenchurch Street.

In 1852 the North London Railway had linked up with the L&BR at Poplar, and Fenchurch Street became the terminus for that line until Broad Street opened in 1865. In 1871 another branch line, the Millwall Extension Railway, opened from Millwall Junction to Millwall Docks to serve the West India Docks better. A year later the line was extended to North Greenwich, near the site of the original Island Gardens DLR station.

In 1893 the Fenchurch Street-Stepney line was widened to four tracks, but by the turn of the century traffic to Blackwall and the Isle of Dogs was dropping. Passenger services east of Stepney to North Greenwich and Blackwall were withdrawn on 3 May 1926 as a result of competition from trams. [Note 2][8]

John Betjeman (1906-1984) in his book First and Last Loves (published 1952), wrote of a journey on the L&BR (most likely in the years just before closure) "Those frequent and quite empty trains of the Blackwall Railway ran from a special platform at Fenchurch Street. I remember them. Like stagecoaches they rumbled past East End chimney pots, wharves and shipping stopping at empty black stations till they came to a final halt at Blackwall station...When one emerged there, there was nothing to see beyond it but a cobbled quay and a vast stretch of wind whipped water..."[9]

The minor stations at Leman Street and Shadwell were closed in 1941 as wartime economy measures (as was Burdett Road opened on the Bow extension route in 1871). The junction at Stepney was disconnected in 1951, so that the only remaining access to the Blackwall Branch was from the LBER via the Limehouse Curve, and this was abandoned in 1963 (last train ran 5 November 1962). Access for occasional goods services to Blackwall and North Greenwich via the North London Railway at Poplar continued until 1968, but with the closure of the docks the line was abandoned, leaving only the Fenchurch Street–Stepney section of the original Blackwall branch still in use.[Note 3]

When the Docklands Light Railway opened in 1987, it reused much of the L&BR line between Minories and Westferry Road. Part of the viaduct at North Greenwich for the line to the original terminus between Mudchute DLR station and Island Gardens was used, though some of this section became disused again when the extension to Lewisham was constructed and those stations replaced with ones nearby but below ground. 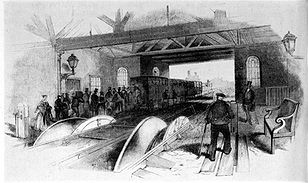 Minories station on the LBR, circa 1840. The winding drums and Cooke-Wheatstone “needle” telegraph instrument (left foreground) are shown. Note the lever-operated brake to keep the cable taut during unwinding.[2]

As built the line was 3½ miles long, with two bi-directional tracks operated independently of each other. At the opening only one track was complete and the other was not brought into use until one month later. Each track had a double length of hemp rope, as an engine was winding in from one end an equivalent length of rope was being paid out at the other. Fourteen miles of rope, with metal swivels inserted at intervals to resist entanglements, were therefore required. On journeys from the terminus cars were dispatched in two groups: the first group of four cars for the three most distant stations (the terminus stations, as the most important, received two cars per trip) and the second group destined for the three nearest. Each rearmost car was released ("slipped") as the convoy passed through its destination station. When the extension to Fenchurch Street was brought into use the pair of cars for that station was slipped from the rope at Minories as before, but the brakes were not applied. Momentum carried them up the slight slope to the new platforms. "Slipping" and "pinning" (attaching) was controlled from an open platform at whichever end of a car was leading, using levers connected to iron grips beneath the carriage floor.[10]

It was obviously dangerous to use the reverse method to pick up cars on journeys to the terminus, so all the cars were "pinned" to the cable at their respective stations and started simultaneously with the convoy departing from the terminus, the timing co-ordinated by an early example of the Cooke-Wheatstone electric telegraph. They arrived at the terminus at intervals and a new train gradually assembled itself, with the pair of cars from the far terminus becoming the lead pair for the return trip. The timetable was very simple: a train every 15 minutes.

Power was provided by eight marine steam engines from Maudslay, Sons and Field, providing for four in use and four in maintenance. The Minories winding house had four at 110 h.p. but the engines at Blackwall were only at 75 h.p. as the overall gradient of the line fell from the west, where it was built on brick arches, to the east.

The line was converted to use steam locomotives in 1848, partly because wear on the rope proved greater than anticipated (a steel-wire replacement had been tried but this twisted and kinked ferociously) and partly in consequence of the intended 1849 extensions. A light roof over the line was provided where it passed near to timber stores or shipping, because of the anticipated fire risk from locomotive sparks. It then became possible to travel directly between intermediate stations, without a detour by way of a terminus.

Branch to Bow from Stepney, called the London and Blackwall Extension Railway (opened 1849, joint-operated with the Eastern Counties Railway):