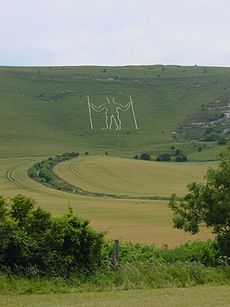 The Long Man of Wilmington situated on the South Downs, Sussex

The Long Man of Wilmington is a hill figure located near Wilmington, East Sussex, England, on the steep slopes of Windover Hill. It is 6 miles (9.7 km) northwest of Eastbourne and 1⁄3 mile (540 m) south of the village of Wilmington. It was formerly often known as the Wilmington Giant, or locally as the Green Man. The Long Man is 235 feet (72 m) tall,[1] holds two "staves", and is designed to look in proportion when viewed from below. Formerly thought to originate in the Iron Age or even the neolithic period, more recent archaeological work has shown that the figure may have been cut in the Early Modern era – the 16th or 17th century AD. From afar the design appears to have been carved from the underlying chalk; however, the modern figure is actually formed from white-painted breeze blocks. 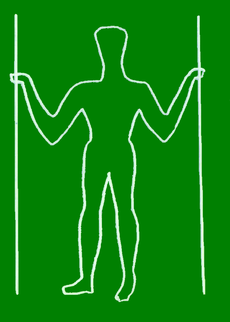 The origin of the Long Man remains unclear. For many years the earliest known record was in a drawing made by William Burrell when he visited Wilmington Priory, near Windover (or Wind-door) Hill, in 1766. Burrell's drawing shows the figure holding a rake and a scythe, both shorter than the present staves.[2] However, in 1993, a new drawing was discovered in the Devonshire Collections at Chatsworth House: this had been made by the surveyor John Rowley in 1710, now the first definite date on which the figure is known to have existed.[3]

An early suggestion, sometimes stated to be a local tradition, was that the Long Man had been cut by monks from nearby Wilmington Priory, and represented a pilgrim, but this was not widely believed by antiquarians, who felt that monks were unlikely to have created an unclothed figure.[4] Up until fairly recently the Long Man was most commonly asserted to have been cut in the neolithic period, primarily due to the presence of a long barrow nearby, or given an Iron Age attribution based on a perceived similarity to other hill figures.[5] Professor John North wrote that during the centuries around 3480 BC the figure would have been positioned to mark the constellation Orion's movement across the ridge above it. The figure, according to this interpretation, may have been a manifestation of a Neolithic astral religion.[6] Another suggestion was that the figure had a Romano-British provenance, while an origin in the time of Anglo-Saxon England gained credence after the 1965 discovery at Finglesham in Kent of an Anglo-Saxon brooch depicting a figure, (possibly Odin), holding two spears in a similar fashion to the Long Man.

Recent archaeological work done by Professor Martin Bell of the University of Reading, in association with Aubrey Manning's Open University programme Landscape Mysteries, has strongly suggested that the figure dates from the Early Modern period – the 16th or 17th century AD.[7] Bell found that the slope on which the Long Man was cut had gone through a period of instability in this time, after a very long prior period of stability, suggesting that the figure was first cut then.[5] This has opened up the possibility that the Long Man could be a Tudor or Stuart-era political satire in the manner recently posited for the Cerne Abbas giant, or possibly a religious image associated with the Reformation: Professor Ronald Hutton noted that "we can at least celebrate the fact that we have our first, apparently unequivocally, Early Modern hill figure, and historians now have to reckon with it".[5]

Whatever the figure's origin, for much of its history it seems to have existed only as a shadow or indentation in the grass, visible after a light fall of snow or as a different shade of green in summer: it is described or illustrated as such in 1710, 1781, 1800, 1835 and 1851.[8] Indeed, the figure was once known locally as the "Green Man".[8] Earlier depictions, such as those of Rowley and Burrell, show other details such as a possible scythe blade on the right-hand staff and the suggestion of a helmet or hat on the figure's head: they also indicate a different, albeit indistinct, position for the feet. The current outline of the Long Man is largely the result of a 'restoration' of 1873-4, when a group led by the vicar of Glynde, Reverend William de St Croix, marked out the outline with yellow bricks cemented together, though it has been claimed that the restoration process distorted the position of the feet.[2] The archaeologist John S. Phené, who was co-opted into the project and whose 1873 talk to the Royal Institute of British Architects had originally inspired it, initially expressed his reservations with both the bricking and the design used.[9] The original intention of the 'restoration' had been to cut the figure down to the chalk bedrock, but had been abandoned after trials showed that the soil depth made this too difficult.[10]

In the years after the 'restoration' several people familiar with the figure commented that the feet were altered, having originally both pointed outwards and downwards so that "the Giant appeared to be coming down the hill", in the words of Ann Downs, who had grown up at Wilmington Priory in the 1840s.[8] Resistivity surveys conducted in the 1990s by R. Castleden, combined with examination of apparent shadow marks shown in early photographs, have provided strong evidence that the feet had in fact pointed outwards as described by 19th century observers and had been slightly lower that in the current outline.[11] There was also some evidence to suggest that the feature on one staff similar to a scythe blade, flail or shepherd's crook was genuine, along with a suggestion of a "helmet" or hat.[12] It seems likely that the proportions of the figure have been distorted slightly by the 1873 bricking and the 1969 replacement of the bricks with breeze blocks, with the Long Man having been up to 75.5 metres (248 ft) tall prior to 1873. 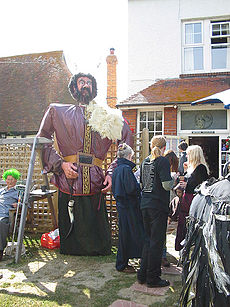 The 1993 book, The Druid Way by Sussex author Philip Carr-Gomm, drew attention to the supposed significance of the Long Man as a sacred site for the modern world.

At dawn on May Day, the Long Man Morris Men dance at the foot of the Long Man.[1] The Long Man plays host to neo-pagan rituals on Sundays closest to the eight Pagan Festivals through the year.[13] 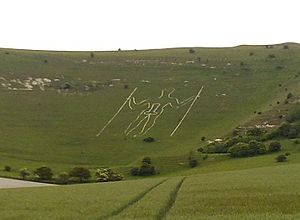 In 2007, the Long Man of Wilmington was used in Trinny Woodall and Susannah Constantine's television fashion show Undress the Nation. Trinny, Susannah and 100 women gave the Long Man a temporary female form by using their bodies to add pigtails, breasts and hips. ITV stated that they were given permission for the event by Sussex Archaeological Society and that they took "the utmost care... to protect this historical site".[14] The Long Man was not permanently changed or affected, according to the owners, the Sussex Archaeological Society. The stunt prompted local Druid Greg Draven to form a protest during filming. Sussex Archaeological Society later apologised for any offence caused to any "individuals or groups" by the filming.[15] The Council of British Druid Orders claimed the stunt would "dishonour an ancient Pagan site of worship".[16]

Overnight, between 17 June and 18 June 2010 a giant phallus was painted on the Long Man rivalling that of the Cerne Abbas Giant. Observed by locals it appeared that a football pitch marker or similar object was used to paint the phallus onto the Long Man.[17]

Eleanor Farjeon, in her book Martin Pippin in the Daisy Field (1937), gives a fancy origin of the giant in a form of a folktale told by Martin Pippin the bard to six young girls in the daisy field.

In his comic The Sandman #19 (1990), Neil Gaiman interprets the figure as the guardian of a gateway into Faerie.