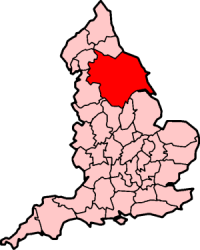 The Long Sword dance is a hilt-and-point sword dance recorded mainly in Yorkshire, England. It is related to the rapper sword dance of Northumbria, but the character is fundamentally different as it uses rigid metal or wooden swords, rather than the flexible spring steel rappers used by its northern relation.

Although Long Sword dances are found scattered all over Yorkshire, there are particular concentrations of dances in East Cleveland, the northern part of the North York Moors and around Sheffield.

Long Sword dances vary in the way they are performed, with some being slow and militaristic, such as the Grenoside or performed with pace and speed like Handsworth dances from near Sheffield. Others have different features including variations of numbers of dancers and distinctive movements.

Unlike many traditional dances in England, which are mainly performed by revival teams, Long Sword dances are often still performed by their own village teams, such as Grenoside Sword Dancers, the Goathland Plough Stots and Flamborough Sword Dancers. These teams generally maintain the traditions of their dances, such as traditional performances on Boxing Day or Plough Monday.

The International Sword Spectacular took place in Whitby, England in May 2004 and was held again in York in May 2008.