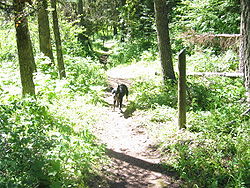 A trail within the Oregon Blue Mountains as part of the Emigrant Springs State Heritage Area. Most long-distance trails, like this one, are built for uninterrupted hiking.[1]

Any route named as a "trail" (or "way", in the UK) will probably be marked, or identified on a map, but it will usually only be described as "long-distance" if it takes the average user more than one day to travel from end to end. Typically, a "long-distance" trail, way or path will be at least 50 km (31 mi) long, but some in Britain are several hundred miles long, and many in the US are much longer.

In some countries, official "trails" will have the surface specially prepared to make the going easier.

In the UK long-distance paths are simply existing rights of way (over private land) "joined together" (perhaps with specially negotiated linking sections) to make a named route. Generally the surface is not especially prepared (which can come as a surprise to walkers from abroad, who find their distance-covering estimates need to be rethought to take rough ground into account) except in special places such as converted rail tracks, or some "busy" hilly areas where stone slabs are laid to prevent erosion.

These have been constructed mainly for bicycle touring. Some are restricted to use by only non-motorized bikes while others are multi-use recreational (i.e. hiking, horseback riding, jogging, rollerblading or walking). Long-distance cycling routes often range in length from hundreds of miles such as Australia's Munda Biddi Trail, or thousands of miles, such as the EuroVelo routes.

There are trails that follow the tow paths of canal systems. A good example is the 525-mile (845 km) New York State Canal System in New York. There also numerous routes that can be followed in Europe, which are suitable for walkers, cyclists, and sometimes horse riders, as well as canoeists, etc. 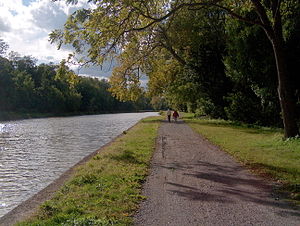 These follow coastlines; good examples are the South West Coast Path and the Isle of Wight Coastal Path in England, the West Coast Trail and East Coast Trail in Canada and the Otter Trail in South Africa. A shorter example is the Gold Coast Oceanway in Australia. The Wales Coast Path is an 870 miles (1,400 km) long-distance walking route around the whole coast of Wales from Chepstow to Queensferry, opened in 2012.[2]

The England Coast Path, currently in development by Natural England and expected to be complete in 2020, will be around 4,500 kilometres (2,800 mi) long. It will become Britain's longest National Trail.[3][4]

These may be cross-country paths, or may follow roadways, or other ways, and often intersect with many other trails in the process. A good example is the Coast-to-Coast path in northern England, which—despite being perhaps the most famous long-distance walking route in England—is not an official National Trail but simply a series of connected pre-existing rights of way, roads and open country with some informal links between them. A similar example, this time for mountain bikes, is The Coast to Coast MTB route (first devised by Tim Woodcock in 1992) that has the same trailheads as the Coast-to-Coast path in northern England, and enjoys an equivalent reputation amongst UK mountain bikers, but takes a mostly different course.

The American Discovery Trail crosses the continental United States from east to west. The Iditarod Trail, at over 1,000 miles, spans Alaska and connects the coastal cities of Seward and Nome. The 220-mile (350 km) Michigan Shore-to-Shore Trail crosses the state from one Great Lakes shore to another. 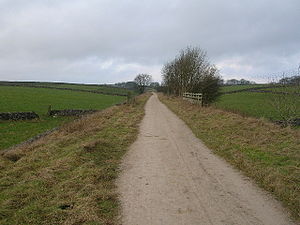 Many long-distance trails have sections suitable for horse riding, and a few are suitable for horse riding throughout their length, or have been developed primarily for horse riding. The Bicentennial National Trail (BNT) in Australia is the longest marked multi-use trail in the world, stretching 5,330 kilometres from Cooktown, Queensland, through New South Wales to Healesville, Victoria. This trail runs the length of the rugged Great Dividing Range through national parks, private property and alongside of wilderness areas. One of the objectives was to develop a trail that linked up the brumby tracks,[5] mustering and stock routes along the Great Dividing Range, thus providing an opportunity to legally ride the routes of stockmen and drovers who once travelled these areas with pack horses.[5] The Bicentennial National Trail is suitable for self-reliant horse riders, fit walkers and mountain bike riders.[6] 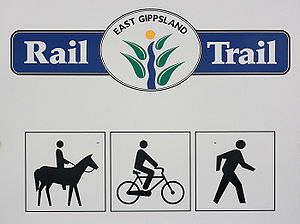 In the United Kingdom the British Horse Society is developing a network of horse trails known as the National Bridleroute Network.[7] A number of long distance multi-use trails have been created in England, including three National Trails, the Pennine Bridleway, 192 km (119 miles), The Ridgeway, 139 km (86 miles), and South Downs Way, 160 km (99 miles).[8]

Rail trails/paths are shared-use paths that make use of abandoned railway corridors. There are also rails with trails in the USA that follow working rail tracks. Most rail trails have a gravel or dirt surface and can be used for walking, cycling, and often horse riding as well. The following description comes from Australia, but is applicable equally to other rail trails that exist throughout the world.

"Following the route of the railways, they cut through hills, under roads, over embankments and across gullies and creeks. Apart from being great places to walk, cycle or horse ride, rail trails are linear conservation corridors protecting native plants and animals. They often link remnant vegetation in farming areas and contain valuable flora and fauna habitat. Wineries and other attractions are near many trails as well as B&B's and other great places to stay."[9]

In the USA the 27 mile/43 km long Cheshire Rail Trail, in New Hampshire, can be used by hikers, horseback riders, snowmobilers, cross-country skiers, cyclists, or even a dogsledders. In Canada, following the abandonment of the Prince Edward Island Railway in 1989, the government of Prince Edward Island purchased the right-of-way to the entire railway system. The Confederation Trail was developed as a tip-to-tip walking/cycling gravel rail trail which doubles as a monitored and groomed snowmobile trail during the winter months, operated by the PEI Snowmobile Association. 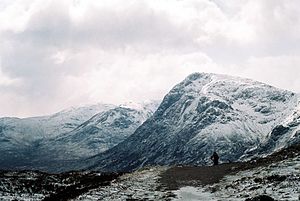 Notable linear examples include the Appalachian Trail, the Pacific Crest Trail, and the Continental Divide Trail. The first long-distance hiking trail in the US was created in 1910 and named The Long Trail. In Europe the Via Alpina is a network of five long-distance hiking trails across the alpine regions of Slovenia, Austria, Germany, Liechtenstein, Switzerland, Italy, France, and Monaco.[10]

Notable loop examples include the Tahoe Rim Trail, the Wonderland Trail (which encircles Mount Rainier), and the Tour du Mont Blanc, which passes through the Alps of France, Switzerland, and Italy.

Trekking in the Himalayas

The Great Himalaya Trail is proposed to follow the Greater Himalaya Range from Namche Barwa in Tibet to Nanga Parbat in Pakistan, forming the world's highest mountain trail.

Trekking in the Andes

The first long distance trail of the Andes was published in 2014. The 1,311 km Greater Patagonian Trail[13] explores the remote areas of the northern Patagonian Andes in the border region between Chile and Argentina.

Among the longest are:

Among the longest are European walking route E8 and the Iron Curtain Trail.

National Trails in the UK

National Trails are a network of officially sanctioned, well-maintained and well-waymarked routes across England and Wales. Examples are the Pennine Way, the Beacons Way and the South West Coast Path. The equivalent routes in Scotland are Long Distance Routes such as the West Highland Way.

Main article: Long-distance trails in the Republic of Ireland

The Kerry Way in south-west Ireland circumnavigates the highest mountain range in Ireland. Along with the adjoining Dingle Way it is noted for its scenic views of the Atlantic, loughs and mountains. 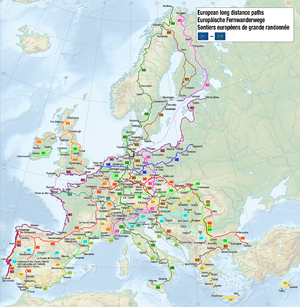