Scotland's Great Trails formerly the four Long Distance Routes (or LDRs) are long-distance "people-powered" trails (predominantly hiking trails but including cycling and canoe routes) in Scotland.[1] The LDRs were previously proposed and financially supported by Scottish Natural Heritage, but administered and maintained by the local authority areas through which they pass. With the passing of the Land Reform Act (Scotland) 2003, access rights largely no longer require to be negotiated and a further 22 Great Trails were developed in Scotland.

Legislation to create the LDRs was passed in 1967, but the first one was not opened officially until 1980. 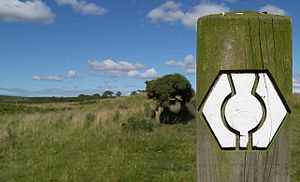 Each of the routes is waymarked with a hexagonal thistle symbol.

The 6 miles (9.7 km) of the Pennine Way terminating at Kirk Yetholm are in Scottish Borders, Scotland, but in the care of the Countryside Agency, and designated a National Trail.