From Infogalactic: the planetary knowledge core
Jump to: navigation, search
Not to be confused with the Vikings' longship.
For the ship, see MV Longboat. For the racehorse, see Longboat (horse). 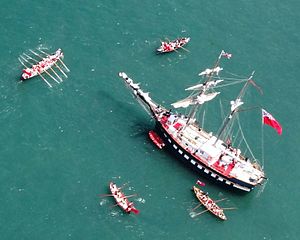 In the days of sailing ships, a vessel would carry several ship's boats for various uses. One would be a longboat, an open boat to be rowed by eight or ten oarsmen, two per thwart. The longboat was double banked; its rowing benches were designed to accommodate two men each pulling an oar on opposite sides. Other boats sometimes embarked on a sailing ship included the cutter, whaleboat, gig, jolly boat, launch, dinghy, and punt.

Unlike the dinghy or the cutter, the longboat would have fairly fine lines aft to permit its use in steep waves such as surf or wind against tide where need be. Like other ships' boats, the longboat could be rigged for sailing but was primarily a pulling boat. It had the double-banked arrangement in common with the cutter. This was possible as it had a beam similar to a cutter's but broader than that of a gig, which was single banked.

The longboat was generally more seaworthy than the cutter, which had a fuller stern for such load-carrying work as laying out an anchor and cable. In a seaway or surf therefore, the cutter was more prone to broaching.

The Oxford English Dictionary notes uses of the word from 1515 to 1867. In later years, particularly in the Royal Navy, the longboat tended to be replaced by the whaler. The cutter was still in use in the 1950s but had been largely replaced by the 32 foot and 25 foot motor cutters.

In some places such as Tristan da Cunha and Pitcairn Island, the surfboats are known as longboats, perhaps because the settlers who introduced them were European seamen. The Tristan da Cunha boats are single banked. What is believed to be the only remaining example in existence of a traditionally built Tristan da Cunha longboat, Carlisle,[1] named after the Royal Navy ship of the same name which made visits to the island in 1932 and 1937, is located in the National Maritime Museum Cornwall.

The French link is to chaloupe, which in this context is a cutter, but lent its name to the Dutch sloep or sloop.

Longboat racing is a sport in Brazil, Laos and Thailand.[2]