From Infogalactic: the planetary knowledge core
(Redirected from Longbowmen)
Jump to: navigation, search
This article is about the medieval weapon. For the military helicopter, see Boeing AH-64 Apache § AH-64D. For the video game, see Apache Longbow (video game).

A longbow is a type of bow that is tall—roughly equal to the height of the user; allowing the archer a fairly long draw, at least to the jaw. A longbow is not significantly recurved. Its limbs are relatively narrow so that they are circular or D-shaped in cross section. Flatbows can be just as long; the difference is that, in cross-section, a flatbow has limbs that are approximately rectangular.

Longbows have been made from many different woods by many cultures; in Europe they date from the Paleolithic, and since the Bronze Age were made mainly from yew, or from wych elm if yew was unavailable. The historical longbow was a self bow made of wood, but modern longbows may also be made from modern materials or by gluing different timbers together.

Organizations which run archery competitions have set out formal definitions for the various classes; many definitions of the longbow would exclude some medieval examples, materials, and techniques of use.[1][2] According to the British Longbow Society, the English longbow is made so that its thickness is at least ⅝ (62.5%) of its width, as in Victorian longbows, and is widest at the handle. This differs from the Medieval longbow, which had a thickness between 33% and 75% of the width. Also, the Victorian longbow does not bend throughout the entire length, as does the medieval longbow. Longbows have been used for hunting and warfare, by many cultures around the world.

In the Middle Ages the English and Welsh were famous for their very powerful longbows, used to great effect in the civil wars of the period and against the French in the Hundred Years' War (with notable success at the battles of Crécy (1346), Poitiers (1356), and Agincourt (1415).[3]

The first book in English about longbow archery was Toxophilus by Roger Ascham, first published in London in 1545 and dedicated to King Henry VIII.

The average length of arrow shafts recovered from the 1545 sinking of the Mary Rose is 75 cm/30 in.

Although firearms supplanted bows in warfare, wooden or fibreglass laminated longbows continue to be used by traditional archers and some tribal societies for recreation and hunting. A longbow has practical advantages compared to a modern recurve or compound bow; it is usually lighter, quicker to prepare for shooting, and shoots more quietly. However, other things being equal, the modern bow will shoot a faster arrow more accurately than the longbow.

The last recorded use of the longbow in war was by British Lt. Col. Jack Churchill, who used it to kill a German soldier in World War II.[4] 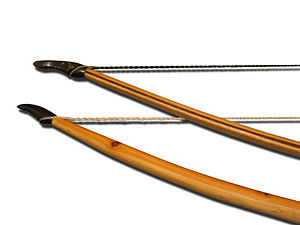 Because the longbow can be made from a single piece of wood, it can be crafted relatively easily and quickly. Amateur bowyers today can make a longbow in about ten to twenty hours, while highly skilled bowyers, such as those who produced medieval English longbows, can make wooden longbows in just a few hours.[citation needed]

One of the simpler longbow designs is known as the self bow, by definition made from a single piece of wood. Traditional English longbows are self bows made from yew wood. The bowstave is cut from the radius of the tree so that sapwood (on the outside of the tree) becomes the back and forms about one third of the total thickness; the remaining two thirds or so is heartwood (50/50 is about the maximum sapwood/heartwood ratio generally used). Yew sapwood is good only in tension, while the heartwood is good in compression. However, compromises must be made when making a yew longbow, as it is difficult to find perfect unblemished yew. The demand for yew bowstaves was such that by the late 16th century mature yew trees were almost extinct in northern Europe.[5] In other desirable woods such as Osage orange and mulberry the sapwood is almost useless and is normally removed entirely.

Longbows, because of their narrow limbs and rounded cross-section (which does not spread out stress within the wood as evenly as a flatbow’s rectangular cross section), need to be less powerful, longer or of more elastic wood than an equivalent flatbow. In Europe the last approach was used, with yew being the wood of choice, because of its high compressive strength, light weight and elasticity. Yew is the best widespread European timber that will make good self longbows, (other woods such as Elm can make longbows but require heat treating of the belly and a wider belly/narrower back, whilst still falling into the definition of a longbow) and has been the main wood used in European bows since Neolithic times. More common and cheaper hard woods, including elm, oak, hickory, ash, hazel and maple, are good for flatbows. A narrow longbow with high draw-weight can be made from these woods, but it is likely to take a permanent bend (known as "set" or "following the string") and would probably be outshot by an equivalent made of yew.[original research?][citation needed]

Wooden laminated longbows can be made by gluing together two or more different pieces of wood. Usually this is done to take advantage of the inherent properties of different woods: some woods can better withstand compression while others are better at withstanding tension. Examples include hickory and lemonwood, or bamboo and yew longbows: hickory or bamboo is used on the back of the bow (the part facing away from the archer when shooting) and so is in tension, while the belly (the part facing the archer when shooting) is made of lemonwood or yew and undergoes compression (see bending for a further explanation of stresses in a bending beam). Traditionally made Japanese yumi are also laminated longbows, made from strips of wood: the core of the bow is bamboo, the back and belly are bamboo or hardwood, and hardwood strips are laminated to the bow's sides to prevent twisting. Ready-made laminated longbows are available for purchase.

Any wooden bow must have gentle treatment and be protected from excessive damp or dryness. Wooden bows may shoot as well as fiberglass, but they are more easily dented or broken by abuse. Bows made of modern materials can be left strung for longer than wood bows, which may take a large amount of set if not unstrung immediately after use.

The longbow and its historical significance, arising from its effective use by the English and Welsh during the Hundred Years' War, have created a lasting legacy for the longbow, which has given its name to modern military equipment, including: