From Infogalactic: the planetary knowledge core
Jump to: navigation, search
This article is about myths related to the mythology of humans or other beings living to mythological ages. For validated specific supercentenarian claims by modern standards, see List of the verified oldest people. For modern, or complete, unvalidated supercentenarian claims, see Longevity claims. 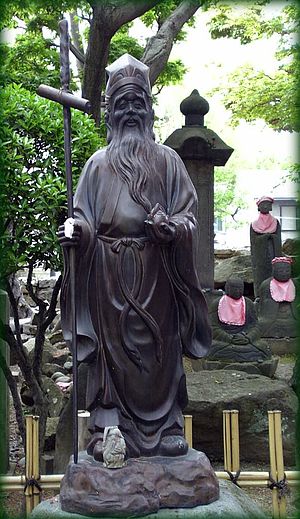 Jurōjin, the God of Longevity in Taoism

Longevity myths are traditions about long-lived people (generally supercentenarians), either as individuals or groups of people, and practices that have been believed to confer longevity, but for which scientific evidence does not support the ages claimed or the reasons for the claims.[1][2] While literal interpretations of such myths may appear to indicate extraordinarily long lifespans, many scholars[3][who?] believe such figures may be the result of incorrect translation of numbering systems through various languages coupled by the cultural and or symbolic significance of certain numbers.

The phrase "longevity tradition" may include "purifications, rituals, longevity practices, meditations, and alchemy"[4] that have been believed to confer greater human longevity, especially in Chinese culture.[1][2]

Modern science indicates various ways in which genetics, diet, and lifestyle affect human longevity. It also allows us to determine the age of human remains with a fair degree of precision.

The Hebrew Bible, the Torah, Joshua, Job, and 2 Chronicles mention individuals with lifespans up to the 969 years of Methuselah.

Some apologists explain these extreme ages as ancient mistranslations that converted the word "month" to "year", mistaking lunar cycles for solar ones: this would turn an age of 969 "years" into a more reasonable 969 lunar months, or 78½ years of the Metonic cycle.[5]

Donald Etz[who?] says that the Genesis 5 numbers were multiplied by ten by a later editor.[6] These interpretations introduce an inconsistency as the ages of the first nine patriarchs at fatherhood, ranging from 62 to 230 years in the manuscripts, would then be transformed into an implausible range such as 5 to 18½ years.[7] Others say that the first list, of only 10 names for 1,656 years, may contain generational gaps, which would have been represented by the lengthy lifetimes attributed to the patriarchs.[8] Nineteenth-century critic Vincent Goehlert suggests the lifetimes "represented epochs merely, to which were given the names of the personages especially prominent in such epochs, who, in consequence of their comparatively long lives, were able to acquire an exalted influence."[9]

Those biblical scholars that teach literal interpretation give explanations for the advanced ages of the early patriarchs. In one view man was originally to have everlasting life, but as sin was introduced into the world by Adam,[10] its influence became greater with each generation and God progressively shortened man's life. The biblical upper limit of longevity was categorized by the Bible scholar Witness Lee as having four successive plateaus of 1,000, 500, 250, and finally 120 years,[11] and "four falls of mankind" correspond to these four plateaus.[12] In a second view, before Noah's flood, a "firmament" over the earth (Genesis 1:6–8) contributed to people's advanced ages.[13]

Abraham's wife Sarah is the only woman in the Old Testament whose age is given. She was 127 (Genesis 23:1).

Like Methuselah in Judaism, Bhishma among the Hindus is believed to have lived to a very advanced age and is a metaphor for immortality. His life spans four generations and considering that he fought for his great-nephews in the Mahabharata War who were themselves in their 70s and 80s, it is estimated that Bhishma must have been between 130 and 370 years old at the time of his death.

These include claims prior to approximately 150 AD, before the fall of the Roman empire.

A book Macrobii ("Long-livers") is a work devoted to longevity. It was attributed to the ancient Greek author Lucian, although it is now accepted that he could not have written it. Most examples given in it are lifespans of 80 to 100 years, but some are much longer: 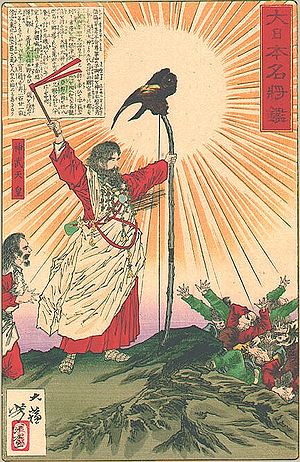 A woodblock print of Emperor Jimmu, part of Famous Generals of Japan by Tsukioka Yoshitoshi

Some early emperors of Japan ruled for more than a century, according to the tradition documented in the Kojiki, viz., Emperor Jimmu and Emperor Kōan.

The reigns of several shahs in the Shahnameh, an epic poem by Ferdowsi, are given as longer than a century:

In Roman times, Pliny wrote about longevity records from the census carried out in 74 AD under Vespasian. In one region of Italy many people allegedly lived past 100; four were said to be 130, others even older. The ancient Greek author Lucian is the presumed author of Macrobii (long-livers), a work devoted to longevity. Most of the examples Lucian gives are what would be regarded as normal long lifespans (80–100 years).

Age claims for the earliest eight Sumerian kings in the major recension of the Sumerian King List were in units and fractions of shar (3,600 years) and totaled 67 shar or 241,200 years.[34]

The first 18 Hùng kings of Vietnam were reported to live at least over 200 years each. Their reigns lasted from 2879 BC to 258 BC.

Deaths officially reported in Russia in 1815 listed 1068 centenarians, including 246 supercentenarians (50 at age 120–155 and one even older).[18] Time magazine considered that, by the Soviet Union, longevity had elevated to a state-supported "Methuselah cult".[72] The USSR insisted on its citizens' unrivaled longevity by claiming 592 people (224 male, 368 female) over age 120 in a 15 January 1959 census[73] and 100 citizens of Russia alone ages 120 to 156 in March 1960.[74] Such later claims were fostered by Georgian-born Joseph Stalin's apparent hope that he would live long past 70.[72] Zhores A. Medvedev, who demonstrated that all 500-plus claims failed birth-record validation and other tests,[72] said Stalin "liked the idea that [other] Georgians lived to be 100".[74]

Swedish death registers contain detailed information on thousands of centenarians going back to 1749; the maximum age at death reported between 1751 and 1800 was 127.[81]

Cases of extreme longevity were listed by James Easton in 1799, who covered 1712 cases documented between 66 BC and 1799, the year of publication;[89] Charles Hulbert also edited a book containing a list of cases in 1825. Some extreme longevity claims include:

A periodical The Aesculapian Register, written by physicians and published in Philadelphia in 1824, listed a number of cases, including several purported to have lived over 130. The authors said the list was taken from the Dublin Magazine.[97]

The idea that certain diets can lead to extraordinary longevity (ages beyond 130) is not new. In 1909, Élie Metchnikoff believed that drinking goat's milk could confer extraordinary longevity. The Hunza diet, supposedly practiced in an area of northern India, has been claimed to give people the ability to live to 140 or more.[105] There has been no proof that any diet has led humans to live longer than the genetically-recognized maximum[citation needed] (currently the oldest verified person, Jeanne Calment, died at age 122.45 years),[106] however Caloric restriction diets have increased lifespans of rodents significantly.

Traditions that have been believed to confer greater human longevity include alchemy.[4]

The Fountain of Youth reputedly restores the youth of anyone who drinks of its waters. The New Testament, following older Jewish tradition, attributes healing to the Pool of Bethesda when the waters are "stirred" by an angel.[110] Herodotus attributes exceptional longevity to a fountain in the land of the Ethiopians.[111] The lore of the Alexander Romance and of Al-Khidr describes such a fountain, and stories about the philosopher's stone, universal panaceas, and the elixir of life are widespread.