Longwood is a settlement and a district of the British island of Saint Helena in the South Atlantic.

In 2008 it had a population of 715, compared to a population of 960 in 1998.[1] The area of the district is 33.4 km2.[2] The large district (second only to Blue Hill) includes the settlement of Hutt's Gate, with its St Matthew's church. The district also contains the island's only existing golf course. 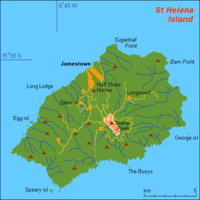 The district contains Prosperous Bay Plain, which is where Saint Helena Airport is located.

There is a weather recording station in the Longwood district. Readings of temperature, air pressure and visibility are automatically read and communicated every 3 hours.[3]

On leaving the University of Oxford, in 1676, Edmond Halley visited Saint Helena and set up an observatory with a 24-foot-long (7.3 m) aerial telescope with the intention of studying stars from the Southern Hemisphere.[4] The site of this telescope is near St Matthew's church in the district. The 2,230-foot-high (680 m) hill there is named for him and is called Halley's Mount.

Halley's Observatory was in use 1677–1678. Having returned to England in 1678, Halley published Catalogus Stellarum Australium in 1679, which included details of 341 southern stars. These additions to present-day star maps earned him comparison with Tycho Brahe. Halley subsequently was awarded with his Masters from Oxford and Fellowship of the Royal Society.

In 1686 Halley published the second part of the results from his Helenian expedition, being a paper and chart on trade winds and monsoons. In this he identified solar heating as the cause of atmospheric motions. He also established the relationship between barometric pressure and height above sea level. His charts were an important contribution to the emerging field of information visualisation.

It is noted as the location of Napoleon's second exile from 1815 until his death on 5 May 1821. France owns Briars Pavilion, Napoleon's initial exile residence, Longwood House and its properties, where he lived during most of his time on the island, and his original grave, but the United Kingdom retains full sovereignty over these properties. Napoleon's main medical physician, Barry Edward O'Meara wrote letters describing the issues of Napoleon and his suite while in captivity, and sent them clandestinely to a friend at the Admiralty in London.[5]