Alonzo "Lonnie" Johnson (February 8, 1899[1][2] – June 16, 1970) was an American blues and jazz singer/guitarist, violinist and songwriter who pioneered the role of jazz guitar and jazz violin, and is recognized as the first to play an electrically-amplified violin.[3][4]

Johnson was born in New Orleans, Louisiana, and raised in a family of musicians. He studied violin, piano and guitar as a child, and learned to play various other instruments including the mandolin, but concentrated on the guitar throughout his professional career. "There was music all around us," he recalled, "and in my family you'd better play something, even if you just banged on a tin can."[5]

By his late teens, he played guitar and violin in his father's family band at banquets and weddings, alongside his brother James "Steady Roll" Johnson.[6] He also worked with jazz trumpeter Punch Miller in the city's Storyville district.

In 1917, Johnson joined a revue that toured England, returning home in 1919 to find that all of his family, except his brother James, had died in the 1918 influenza epidemic.

He and his brother settled in St. Louis in 1921.[7] The two brothers performed as a duo, and Lonnie also worked on riverboats, working in the orchestras of Charlie Creath and Fate Marable. In 1925 Lonnie married, and his wife Mary soon began to pursue a blues career in her own right, performing as Mary Johnson and pursuing a recording career from 1929 to 1936.[8] She is not to be confused with the later soul and gospel singer of the same name. As is often the case with early blues artists, information on Mrs Johnson is often contradictory and confusing. Many online sources give her name before marriage as Mary Smith, and state that she began performing in her teens. However, author James Sallis[9] gives her single name as Mary Williams, and states that her interest in writing and performing blues material began when she started helping Lonnie write songs, and developed from there. Curiously enough, the two never recorded together. They had six children before their divorce in 1932.[8]

In 1925, Johnson entered and won a blues contest at the Booker T. Washington Theatre in St. Louis, the prize being a recording contract with Okeh Records.[10] To his regret, he was then tagged as a blues artist, and later found it difficult to be regarded as anything else. He later said, "I guess I would have done anything to get recorded – it just happened to be a blues contest, so I sang the blues."[7] Between 1925 and 1932 he made about 130 recordings for the Okeh label (many were good sellers). He was called to New York to record with the leading blues singers of the day, including Victoria Spivey and country blues singer Alger "Texas" Alexander. He also toured with Bessie Smith's T.O.B.A. show.[10]

In December 1927, Johnson recorded in Chicago as a guest artist with Louis Armstrong and his Hot Five, paired with banjoist Johnny St. Cyr. He played on the sides "I'm Not Rough", "Savoy Blues", and "Hotter Than That."[11] In 1928 he recorded "Hot and Bothered", "Move Over", and "The Mooche" with Duke Ellington on Okeh Records;[12] he also recorded with a group called The Chocolate Dandies (in this case, McKinney's Cotton Pickers). He pioneered the guitar solo on the 1927 track "6/88 Glide"[6] and many of his early recordings showed him playing 12-string guitar solos in a style that influenced such future jazz guitarists as Charlie Christian and Django Reinhardt, and gave the instrument new meaning as a jazz voice. He excelled in purely instrumental pieces, some of which he recorded with the white jazz guitarist Eddie Lang, whom he teamed up with in 1929. These recordings were among the first in history to feature black and white musicians performing together, but Lang was credited as Blind Willie Dunn to disguise the fact.[7]

Much of Johnson's music featured experimental improvisations that would now be categorised as jazz rather than blues. According to blues historian Gérard Herzhaft,[3] Johnson was "undeniably the creator of the guitar solo played note by note with a pick, which has become the standard in jazz, blues, country, and rock". Johnson's style reached both the Delta bluesmen and urban players who would adapt and develop his one string solos into the modern electric blues style.[6] However, writer Elijah Wald[13] has written that, in the 1920s and 1930s, Johnson was best known as a sophisticated and urbane singer rather than an instrumentalist – "Of the forty ads for his records that appeared in the Chicago Defender between 1926 and 1931, not one even mentioned that he played guitar."

Johnson's compositions often depicted the social conditions confronting urban African Americans ("Racketeers' Blues", "Hard Times Ain't Gone Nowhere", "Fine Booze and Heavy Dues"). In his lyrics he captured the nuances of male-female love relationships in a way that went beyond Tin Pan Alley sentimentalism. His songs displayed an ability to understand the heartaches of others that Johnson saw as the essence of his blues.[10]

After touring with Bessie Smith in 1929, Johnson moved to Chicago, and recorded for Okeh with stride pianist James P. Johnson. However, with the temporary demise of the recording industry in the Great Depression, Johnson was compelled to make a living outside music, working at one point in a steel mill in Peoria, Illinois. In 1932 he moved again to Cleveland, Ohio, where he lived for the rest of the decade. There, he played intermittently with the band of vocalist and singer Putney Dandridge, and performed on radio programs.[6]

By the late 1930s, however, he was recording and performing in Chicago for Decca Records, working with Roosevelt Sykes and Blind John Davis among others. In 1939, during a session for the Bluebird label with pianist Joshua Altheimer, Johnson used an electric guitar for the first time.[7] He recorded 34 tracks for Bluebird over the next five years, including the hits "He's a Jelly Roll Baker"[14] and "In Love Again".[6] 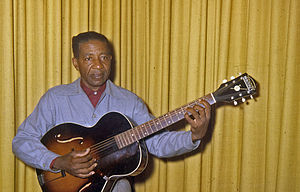 After World War II, Johnson made the transition to rhythm and blues, recording for King Records in Cincinnati, and having a major hit in 1948 with "Tomorrow Night", written by Sam Coslow and Will Grosz. This topped the Billboard "Race Records" chart for 7 weeks, also made # 19 on the pop charts, and had reported sales of three million copies.[7] A blues ballad with piano accompaniment and background singers, the song bore little resemblance to much of Johnson's earlier blues and jazz material. The follow-ups "Pleasing You", "So Tired" and "Confused" were also major R&B hits.[15]

In 1952 Johnson toured England. Tony Donegan, a British musician who played on the same bill, paid tribute to Johnson by changing his name to Lonnie Donegan. Although Johnson's performances are thought to have been received poorly by British audiences, this may also have been due to organisational problems surrounding the tour.[16]

After returning to the U.S., Johnson moved to Philadelphia. His career had been a roller coaster ride that sometimes took him away from music. In between great musical accomplishments, he had found it necessary to take menial jobs that ranged from working in a steel foundry to mopping floors as a janitor. He gradually dropped out of music again in the 1950s, and took menial janitorial jobs; he was working at Philadelphia's Benjamin Franklin Hotel in 1959 when WHAT-FM disc jockey Chris Albertson happened upon him and produced a comeback album, for the Prestige Bluesville Records label, Blues by Lonnie Johnson. This was followed by other Prestige albums, including one (Blues & Ballads) with former Ellington boss, Elmer Snowden, who had helped Albertson locate Johnson. There followed a Chicago engagement for Johnson at the Playboy Club and this succession of events placed him back on the music scene at a fortuitous time: young audiences were embracing folk music and many veteran performers were stepping out of obscurity. In short order, Lonnie Johnson found himself reunited with Duke Ellington and his orchestra, and appearing as special guest at an all-star folk concert, both performances being staged at Town Hall, New York City.

In 1961, Johnson was reunited with his old Okeh recording partner, Victoria Spivey, for another Prestige album, Idle Hours, and the two singers performed at Gerdes Folk City. In 1963 he toured Europe as part of the American Folk Blues Festival show, with Muddy Waters and others, and recorded an album with Otis Spann in Denmark.

In May 1965, he performed at a club in Toronto before an audience of four people.[17] Two weeks later, his shows at a different club attracted a larger audience and Johnson, also encouraged by Toronto's relative racial harmony, decided to move to the city. He opened his own club, Home of the Blues, on Toronto's Yorkville Avenue in 1966, but it was a business failure and Johnson was ultimately fired by the man who became owner.[17] Throughout the rest of the decade he recorded and played local clubs in Canada as well as embarking on several regional tours.[6]

In March 1969, he was hit by a car while walking on a sidewalk in Toronto.[18] Johnson was seriously injured, suffering a broken hip and kidney injuries. A benefit concert was held on May 4, 1969, featuring two dozen acts, including Ian and Sylvia, John Lee Hooker and Hagood Hardy.[19] Johnson never fully recovered from his injuries and suffered what was described as a stroke in August. He was able to return to the stage for one performance at Massey Hall on February 23, 1970, walking with the aid of a cane to sing a couple of songs with Buddy Guy and receiving a standing ovation.[20] He died on June 16, 1970 and although a funeral was held for him at Mount Hope Cemetery in Toronto by his friends and fellow musicians, his family members insisted on transferring the body to Philadelphia where he was buried.[17][21] At the time, Johnson was reported to have been "virtually broke."[17]

In 1993, Smithsonian Folkways released The Complete Folkways Recordings, Johnson's anthology of music on Folkways Records. He had been featured on several compilation blues albums, on Folkways, beginning in the 1960s, but had never released a solo album on the label in his lifetime.[22]

Johnson was posthumously inducted into the Louisiana Blues Hall of Fame in 1997.

Lonnie Johnson is featured as a character in Who Do You Love? (2008), a feature film that dramatised the life of Leonard Chess, starring Alessandro Nivola, David Oyelowo and TJ Hassan as Johnson. The film was directed by Jerry Zaks.

Lonnie Johnson's early recordings are the first guitar recordings that display a single-note soloing style with use of string bending and vibrato. While it cannot be proven that this contains the influence of earlier players who did not record, it is the origin of blues and rock solo guitar. Johnson's influence is obvious in Django Reinhardt, T-Bone Walker and virtually all electric blues guitar players.

One of Elvis Presley's earliest recordings was a version of Johnson's blues ballad "Tomorrow Night", written by Sam Coslow and Will Grosz. Presley's vocal phrasing mimics Johnson's performance; and many of Presley's signature vibrato and baritone sounds can be heard in development. Tomorrow Night was also recorded by LaVern Baker; and in 1957 by Jerry Lee Lewis.

In the liner notes for Biograph, Bob Dylan describes his encounters with Johnson in New York City. "I was lucky to meet Lonnie Johnson at the same club I was working and I must say he greatly influenced me. You can hear it in that first record. I mean Corrina, Corrina...that's pretty much Lonnie Johnson. I used to watch him every chance I got and sometimes he'd let me play with him. I think he and Tampa Red and of course Scrapper Blackwell, that's my favorite style of guitar playing."[23] Also, Dylan wrote about the performing method he learned from Robert Johnson in Chronicles, Vol. 1. Dylan thinks Robert Johnson had learned a lot from Lonnie. Some of Robert's songs, as such, are seen as new versions of songs recorded by Lonnie.