Lorain is a city in Lorain County, Ohio, United States. The municipality is located in northeastern Ohio on Lake Erie, at the mouth of the Black River, about 30 miles west of Cleveland.

Ford Motor Company had the Lorain Assembly Plant in the city, mostly known for assembling the Ford Econoline (E-series) van, Ford Torino and Mercury Montego, and beginning in 1975 the Ford Thunderbird and Mercury Cougar (through 1997); the plant ceased all production on December 14, 2005 because the UAW and Ford management were unable to come to terms on a new contract. The sprawling United States Steel Mill, portions recently acquired by Republic Steel, stretches for nearly 3 miles on the city's south side. These mills have operated in the city since 1895 and continue to employ thousands of local residents. Though the blast furnaces were idled in late 2008, Republic announced in December 2011 that they would be building electric arc furnaces to once again make steel in Lorain.

The Charles Berry Bridge is located in Lorain, and is the second-largest bascule bridge in the world. 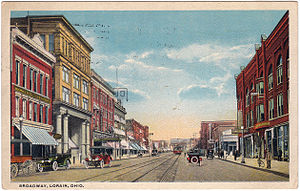 Politics in the City of Lorain have traditionally been closely tied to the local Democratic Party. However, through the years Republicans occasionally have been able to win offices. Since the late 1990s Lorain has elected all Democrats to city council, but in 1999 a Republican - Craig Foltin - was elected mayor. In 2003, the voters re-elected Craig L. Foltin.

Lorain is one of the largest cities in Ohio to not have a charter. The city of Lorain functions under a Statutory government. This provides for a Mayor-Council form with until recently 3 at-large seats and 8 wards.

As of the 2008 General Election, the number of residents registered to a political party were:

The city is home to the Lorain Municipal Court, which serves the cities of Lorain and Sheffield Lake as well as Sheffield Township.

There were 25,529 households of which 33.7% had children under the age of 18 living with them, 37.1% were married couples living together, 21.0% had a female householder with no husband present, 6.1% had a male householder with no wife present, and 35.9% were non-families. 30.8% of all households were made up of individuals and 11.5% had someone living alone who was 65 years of age or older. The average household size was 2.48 and the average family size was 3.09.

CenturyTel of Ohio is based in Lorain.

According to the City's 2010 Comprehensive Annual Financial Report, [13] the top employers in the city are:

Over 70 different nationalities live in the Lorain area. Many were originally attracted by work in the steel mills and ship yards. Lorain is sometimes referred to as Steel City mainly because of its well-known steel mill. Downtown Lorain was devastated by a tornado in 1924 and as part of an initiative to rebuild the downtown several historic buildings were constructed, including the Lorain Palace Theatre which opened in 1928 and continues to operate today.[14] One of the highlights of the summer season is the Lorain International Festival.