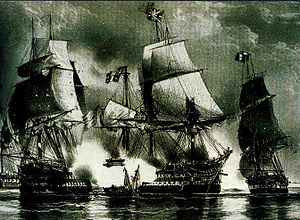 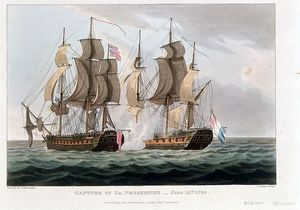 He was entered on the books of the cutter Jackal in June 1782,[2] and in 1783 was appointed to Salisbury, bearing the flag of Vice-Admiral John Campbell on the Newfoundland station. Afterwards he served in the West Indies under Commodore Gardner, and returned to England in 1789 as acting Lieutenant of Europa. He was not confirmed as a Lieutenant until 21 September 1790,[2] at the time of the Great Spanish Armament crisis.

In 1792 he went to the Mediterranean in the frigate Druid, and on 16 September 1793 was made captain[2] by Lord Hood and appointed to the command of Nemesis (28 guns). In March 1794 he was transferred to Juno (32 guns), and attached to the squadron under Admiral Hotham, blockading Toulon. Juno took part in the action of 14 March 1795, which resulted in the capture of the French ships Ça Ira and Censeur, and was one of the squadron, under Commodore Taylor, which convoyed the homeward trade in the following autumn, when the Censeur was recaptured by the French off Cape St Vincent on 7 October 1796.

On his return to England, Lord Amelius was appointed to the frigate Dryad, of 44 guns and 251 men, and on the coast of Ireland, at the Action of 13 June 1796, captured the Proserpine, of 42 guns and 348 men, after a brilliant and well-managed action, in which Dryad lost only two killed and seven wounded, while Proserpine lost thirty killed and forty-five wounded. He also captured several privateers. In 1800 he was appointed to Fortunée (40 guns), employed in the Channel and in attendance on the King at Weymouth.

Over the next ten years he commanded HM Ships Majestic, Saturn, and Royal Oak (all 74 guns) in the English Channel, and in 1809 had charge of the amphibious landing of Lord Chatham's army at Walcheren, and continued, during the operations on that coast, as second-in-command under Sir Richard Strachan.

On 1 August 1811 he was promoted to Rear-Admiral,[2] but during that and the two following years he continued in the North Sea, stretching in 1813 as far as the North Cape in command of a small squadron on the look-out for the American Commodore Rogers. In 1814 he commanded in the Basque Roads, and conducted the negotiations for the local suspension of hostilities. On 12 August 1819 he was advanced to Vice-Admiral,[2] and from 1824 to 1827 was Commander-in-Chief at Lisbon[2] and on the coast of Portugal. He became a full Admiral on 22 July 1830,[2] and was Commander-in-Chief, Plymouth from 1836 to 1839.[2]

Beauclerk was a fine professional officer who benefited from his family connections to secure early promotion. Port Beauclerc, Point Amelius, Point St. Albans, Beauclerc Island, Beauclerc Peak and Amelius Island, all in Alaska, are named for him.

He died, unmarried, at his seat, Winchfield House, near Farnborough, Hampshire, on 10 December 1846.