From Infogalactic: the planetary knowledge core
Jump to: navigation, search
Not to be confused with the Lord Great Chamberlain, who is responsible for royal affairs in the Palace of Westminster.

The Lord Chamberlain is always sworn of the Privy Council, is usually a peer and before 1782 the post was of Cabinet rank. Until 1924 the position was a political one. The office dates from the Middle Ages, when the King's Chamberlain often acted as the King's spokesman in Council and Parliament.[1]

The current Lord Chamberlain is The Earl Peel, who has been in office since 16 October 2006.[2] 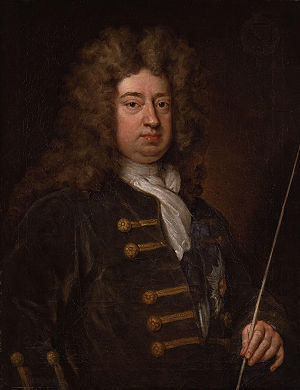 The Lord Chamberlain is the senior official of the Royal Household and oversees its business, including liaising with the other senior officers of the Household, chairing Heads of Department meetings, and advising in the appointment of senior Household officials.[1][3] The Lord Chamberlain also undertakes ceremonial duties and serves as the channel of communication between the Sovereign and the House of Lords.[1]

The Lord Chamberlain's Office is a department of the Royal Household and is headed by the Comptroller. It is responsible for organising ceremonial activities including state visits, investitures, garden parties, the State Opening of Parliament, weddings and funerals.[1]

He also regulates the design and the wearing of court uniform and dress and how insignia are worn.

The Licensing Act 1737 gave the Lord Chamberlain the statutory authority to veto the performance of any new plays: he could prevent any new play, or any modification to an existing play, from being performed for any reason, and theatre owners could be prosecuted for staging a play (or part of a play) that had not received prior approval. This act was replaced by the Theatres Act 1843, which restricted the powers of the Lord Chamberlain so that he could only prohibit the performance of plays where he was of the opinion that "it is fitting for the preservation of good manners, decorum or of the public peace so to do". This duty was abolished under the Theatres Act 1968; the first London performance of the musical Hair was delayed until the act was passed after a licence had been refused.[4]

Lords Chamberlain since 1399 to the present: