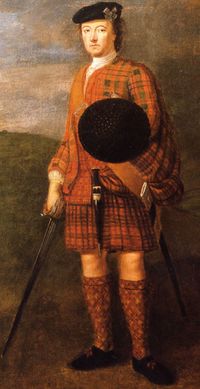 Lord George Murray (4 October 1694 – 11 October 1760) was a Scottish Jacobite general, most noted for his 1745 campaign under Bonnie Prince Charlie into England. Lord George was the sixth son of John Murray, 1st Duke of Atholl, who was the chief of Clan Murray, by his first wife, Catherine, daughter of the 3rd Duke of Hamilton.

Born at Huntingtower near Perth, Murray joined the army in Flanders in 1712 at the age of eighteen. Three years later, against his father's wishes, he and his brothers, the Marquis of Tullibardine and Lord Charles Murray joined the Jacobite rebels under the Earl of Mar, with each brother commanding a regiment of the men of Atholl. Lord Charles was taken captive at Preston, but following the collapse of the rising, Lord George escaped with Tullibardine to South Uist, and thence to France.

In 1719, Murray was involved in Jacobite military affairs in the Western Highlands, where Tullibardine and the Earl Marischal had joined forces with Spaniards, which terminated at the Battle of Glenshiel on 10 June. Murray was wounded on the final day of combat whilst commanding the Jacobite right wing. He spent the next few months hiding in the Highlands and later made his way towards Rotterdam where he arrived in May, 1720. Little is known of Murray's life on the continent. Some scholars have theorised that he served in the Sardinian army, though the supporting evidence has drawn much criticism. He returned to Scotland in 1724 when the Duke of Atholl died, and was succeeded in his title by his second son, James, owing to the attainder of Tullibardine. Following this, Lord George leased from his brother the old family property of Tullibardine in Strathearn. The government pursued a strategy of weakening the Jacobite sympathies of elite families by acts of clemency and following solicitation by Murray's father he was pardoned in 1725.[1]

In 1728, he married Amelia, daughter and heiress of James Murray of Strowan and Glencarse. They had three sons and two daughters.

Decision to join the rising

Lord George Murray had been a vehement opponent of the Acts of Union 1707 but in 1739 he took the oath of allegiance. The Duke of Perth made overtures to Murray on behalf of Charles Edward Stuart but Murray, who had been living quietly since 1725, remained skeptical even after Charles' arrival in Scotland in July, 1745, with the accompaniment of Tullibardine. On 21 August, Murray accompanied his brother the Duke to pay his respects to Sir John Cope, the commander of the government troops. During this visit, Cope appointed Murray Deputy-Sheriff of Perthshire. Given his later affiliations, it has been suggested both that Murray acted with duplicity towards Cope and that his hesitation regarding Charles was genuine. In September, when Charles was at Blair Castle (vacated by the Duke upon his advance), Murray publicly espoused the Jacobite cause. He wrote to his brother explaining that he did so for reasons of conscience, realising the risk of ruin his actions carried with them

Upon joining the army, he was made Lieutenant-General, but Charles' secretary John Murray of Broughton intrigued against Murray and insinuated he was a traitor. Despite this, Murray exerted himself successfully at Perth, bringing discipline and order to his new army, winning the confidence of the Highland levies, with whose ways he was familiar, resolving a dispute over who was to have the place of honour in the right of the line, and used his influence to prevent the exactions and arbitrary interference with civil rights which others had counseled Charles to implement. By 21 September, 1745, Murray was leading the Jacobite left wing in person and was practically commander-in-chief of the force, having ordered the successful attack at the Battle of Prestonpans on his own initiative.

Murray disagreed with Charles' plans to invade England and counseled against them. Nevertheless, when the decision was made, he prevailed upon the Prince to march for Cumberland, where the hilly ground would be more favourable to highlander tactics, rather than an open assault against General Wade, whose army was posted at Newcastle. Murray conducted the Siege of Carlisle but when the town was surrendered on 14 November, he resigned his command on the grounds that his authority had been undermined by the Prince, and obtained permission to serve as a volunteer in the Atholl levies. The army, however, were unhappy with his replacement, the Duke of Perth, and so Charles quickly reinstated Murray, who commanded the army on its march towards Derby. Whilst occupying the city on 5 December, Murray urged the Prince to retreat, citing the lack of support from France and English Jacobites as factors against the success of the invasion. Murray now commanded the support of the council and so the retreat was agreed upon, but Charles was furious at the decision and never forgave Murray. Despite this apparent lack of confidence, Murray's aide-de-camp, James Chevalier de Johnstone, has been quoted as saying that, "had Prince Charles slept during the whole of the expedition, and allowed Lord George Murray to act for him according to his own judgment, he would have found the crown of Great Britain on his head when he awoke." His "Memoire of the Rebellion 1745-1746" lays the blame for the failure on Charles' refusal to follow the advice of Murray.

During the retreat, Murray commanded the rear-guard, a difficult task considering the proximity of government forces both to his rear and flank commanded in part by the Duke of Cumberland, as well as the negative attitude of Charles. At the Clifton Moor Skirmish, Murray turned and fought, enabling the army to reach Carlisle without loss of stores or war material, allowing them to advance to Stirling by the third of January 1746, where Charles laid siege to Stirling Castle with the aid of reinforcements from Perth. Murray (who had counseled against this move), however, was kept busy with battle near Falkirk where he defeated General Hawley. Sickness and desertion were beginning to take their toll on his force, however, and with the advance of Cumberland, retreat to the Highlands was a necessity. Charles was forced to acquiesce, angering him yet further, and causing him to accuse Murray of being a traitor. Murray's failure to capture the Atholl stronghold, Blair Castle, did nothing to refute this, though there seems to be little other than rumour and circumstance to back this claim up.

In April, the Jacobite army was near Inverness and Charles decided to give battle to Cumberland, despite the exhaustion prevalent throughout his army. He took up a position on the left bank of the Nairn river at Culloden Moor, despite Murray's counsel to set up position on the opposite bank. The Battle of Culloden was the death blow to the Stuart cause, with the clansmen being routed by the British Army. Cumberland told his troops on the following day that Murray had given orders that they were to be shown no quarter; however, seemingly original copies of Murray's orders were found in Cumberland's papers and contain no such injunction.

Following the defeat, Murray conducted a remnant of the Jacobite army to Ruthven Barracks with a mind to organise further resistance. Charles, however, had decided to abandon the cause and Murray was issued a letter dismissing him from the Prince's service. The general replied by upbraiding Charles for his distrust and mismanagement.

Murray escaped to the continent in December 1746, and was well received in Rome by the Prince's father, James Stuart, who granted him a pension. Despite the father's hospitality, when Murray journeyed to Paris the following year, the Prince refused to meet with him.

Murray lived in numerous places on the continent over the next few years, and eventually died in Medemblik, Holland, on 11 October 1760 at the age of 66.[2] Originally, he was buried inside the Bonifacius-church [3] in Medemblik, but the church was shortened in 1860 and as a consequence his grave was outside the church henceforth, although his grave-stone was removed and placed inside the smaller church. In 1880 a new stone was placed on his grave by his descendant John Stewart-Murray, 7th Duke of Atholl. People still visit his grave, some of them bringing heather from Culloden.

This article incorporates text from a publication now in the public domain: Chisholm, Hugh, ed. (1911). Encyclopædia Britannica (11th ed.). Cambridge University Press. Missing or empty |title= (help)CS1 maint: ref=harv (link)<templatestyles src="Module:Citation/CS1/styles.css"></templatestyles> Text included has been adapted for Wikipedia - there are no direct transfers outside of quotage.