From Infogalactic: the planetary knowledge core
(Redirected from Lord of the animals)
Jump to: navigation, search 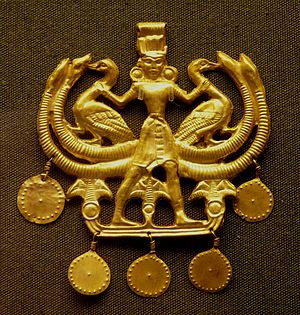 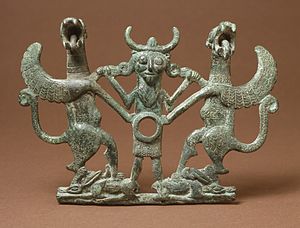 Luristan bronze horse bit cheekpiece with "Master of Animals" motif, about 700 BC

The Master of (the) Animals or Lord of the Animals is a motif in ancient art showing a human between and grasping two confronted animals. It is very widespread in the art of the Ancient Near East and Egypt. The figure is normally male, but not always, the animals may be realistic or fantastical, and the figure may have animal elements such as horns, or an animal upper body. Unless he is shown with specific divine attributes, he is typically described as a hero, although what the motif represented to the cultures which created the works probably varies greatly.[1] The motif is so widespread and visually effective that many depictions were probably conceived as decoration with only a vague meaning attached to them.[2] The Master of Animals is the "favorite motif of Achaemenian official seals", but the figures in these cases should be understood as the king.[3]

The human figure may be standing, found from the 4th millennium BC, or kneeling on one knee, these latter found from the 3rd millennium BC. He is usually shown looking frontally, but in Assyrian pieces typically shown from the side. Sometimes the animals are clearly alive, whether fairly passive and tamed, or still struggling or attacking. In other pieces they may represent dead hunter's prey.[4]

Other associated representations show a figure controlling or "taming" a single animal, usually to the right of the figure. But the many representations of heroes or kings killing an animal are distinguished from these.[5]

The motif takes pride of place at the top of the famous Gebel el-Arak Knife in the Louvre, an ivory and flint knife dating from the Naqada II d period of Egyptian prehistory, which began c.3450 BC. Here a figure in Mesopotamian dress, often taken to be a god, grapples with two lions. It has been connected to the famous Pashupati seal from the Indus Valley Civilization (2500-1500 BC), showing a figure seated in a yoga-like posture, with a horned headress (or horns), and surrounded by animals.[6] This in turn is related to a figure on the Gundestrup cauldron, who sits with legs part-crossed, has antlers, is surrounded by animals and grasps a snake in one hand and a torc in the other. This famous and puzzling object probably dates to 200 BC, or possibly as late as 300 AD, and though found in Denmark was perhaps made in Thrace. The purse cover from the Sutton Hoo burial of about 620 AD has two plaques with a man between two wolves, and the motif is common in Anglo-Saxon art and related Early Medieval styles, where the animals generally remain aggressive.

In the Art of Mesopotamia the motif appears very early, usually with a "naked hero", for example at Uruk in the Uruk period (c. 4000 to 3100 BC), but was "outmoded in Mesopotamia by the seventh century BC".[7] In Luristan bronzes the motif is extremely common, and often highly stylized.[8] In terms of its composition the Master of Animals motif compares with another very common motif in the art of the ancient Near East and Mediterranean, that of two confronted animals flanking and grazing on a Tree of Life.

Assyrian hero grasping a lion and a snake 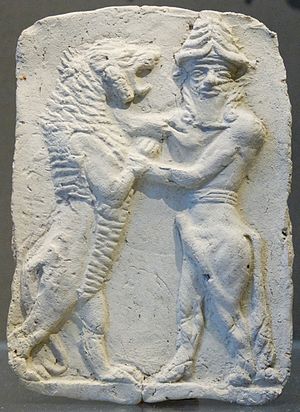 Single bull-man wrestling with a lion, Mesopotamia, 3rd millennium BC

Although such figures are not all, or even usually, deities, the term can also be a generic name for a number of deities from a variety of cultures with close relationships to the animal kingdom or in part animal form (in cultures where that is not the norm). These figures control animals, usually wild ones, and are responsible for their continued reproduction and availability for hunters.[9] They sometimes also have female equivalents, the so-called Mistress of the Animals.[10] Many Mesopotamian examples may represent Enkidu, a central figure in the Ancient Mesopotamian Epic of Gilgamesh. They may all have a Stone Age precursor who was probabably a hunter's deity. Many relate to the horned deity of the hunt, another common type, typified by Cernunnos, and a variety of stag, bull, ram and goat gods. Horned gods are not universal however, and in some cultures bear gods, like Arktos might take the role, or even the more anthropomorphic deities who lead the Wild Hunt. Such figures are also often referred to as 'Lord of the forest'* or 'Lord of the mountain'.

Potnia Theron, a phrase used by Homer meaning "Mistress of the Animals" is used for early Greek depictions of goddesses, usually Artemis, holding animals. The Greek god shown as "Master of Animals" is usually Apollo, the god of hunting.[11] Shiva has the epithet Pashupati meaning the "Lord of cattle", and these figures may derive from a Proto-Indo-European deity or archetype.[12] Chapter 39 of the Book of Job has been interpreted as an assertion of the God of the Hebrew Bible as Master of Animals.[13]