Lorenzo Ghiberti (Italian: [loˈrɛntso ɡiˈbɛrti]; 1378 – 1 December 1455), born Lorenzo di Bartolo, was a Florentine Italian artist of the Early Renaissance best known as the creator of the bronze doors of the Florence Baptistery, called by Michelangelo the Gates of Paradise. Trained as a goldsmith and sculptor, he established an important workshop for sculpture in metal. His book of Commentari contains important writing on art, as well as what may be the earliest surviving autobiography by any artist.

Ghiberti was born in Pelago, 20 km from Florence. His father was Bartoluccio Ghiberti, an artist and goldsmith, who trained his son in goldsmithing. He then went to work in the Florence workshop of Bartoluccio di Michele, where Antonio del Pollaiolo also received his training.[1] When the bubonic plague struck Florence in 1400, Ghiberti emigrated to Rimini, where he assisted in the completion of wall frescoes of the castle of Carlo I Malatesta. 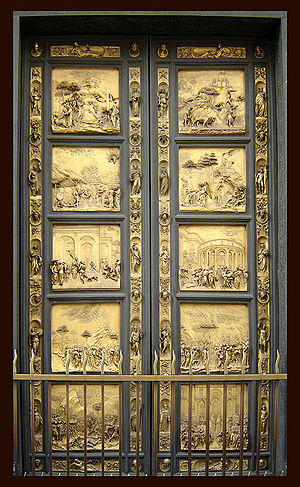 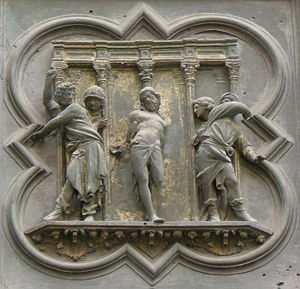 In Flagellation, one of the panels on the North Doors.

Ghiberti's career was dominated by his two successive commissions for pairs of bronze doors to the Florence Baptistery (Battistero di San Giovanni). They are recognized as a major masterpiece of the Early Renaissance, and were famous and influential from their unveiling. Ghiberti first became famous when as a 23-year-old he won the 1401 competition for the first set of bronze doors; Brunelleschi was the runner up. The original plan was for the doors to depict scenes from the Old Testament, and the trial piece was the sacrifice of Isaac, which survives. However, the plan was changed to depict scenes from the New Testament, instead.

To carry out this commission, he set up a large workshop in which many artists trained, including Donatello, Masolino, Michelozzo, Uccello, and Antonio Pollaiuolo. When his first set of twenty-eight panels was complete, Ghiberti was commissioned to produce a second set for another doorway in the church, this time with scenes from the Old Testament, as originally intended for his first set. Instead of twenty-eight scenes, he produced ten rectangular scenes in a completely different style. They were more naturalistic, with perspective and a greater idealization of the subject. Michelangelo dubbed these scenes the "Gates of Paradise." "The Gates of Paradise" is a major monument of the age of Renaissance humanism.

As recommended by Giotto, Andrea Pisano was awarded the commission to design the first set of doors in 1329. The south doors were originally installed on the east side, facing the Duomo, and were transferred to their present location in 1452. This took six years, the doors being completed in 1336. These proto-Renaissance doors consist of 28 quatrefoil panels, with the twenty top panels depicting scenes from the life of St. John the Baptist. The eight lower panels depict the eight virtues of hope, faith, charity, humility, fortitude, temperance, justice and prudence. The moulded reliefs in the doorcase were added by Ghiberti in 1452. There is a Latin inscription on top of the door: "Andreas Ugolini Nini de Pisis me fecit A.D. MCCCXXX" (Andrea Pisano made me in 1330).

These new doors would serve as a votive offering to celebrate the sparing of Florence from relatively recent scourges such as the Black Death in 1348. Many artists competed for this commission and a jury selected seven semifinalists. These finalists included Ghiberti, Filippo Brunelleschi, Donatello and Jacopo della Quercia,[3] with 23-year old Ghiberti winning the commission. At the time of judging, only Ghiberti and Brunelleschi were finalists, and when the judges could not decide, they were assigned to work together on them. Brunelleschi's pride got in the way, and he went to Rome to study architecture leaving Ghiberti to work on the doors himself. Ghiberti's autobiography, however, claimed that he had won, "without a single dissenting voice." The original designs of The Sacrifice of Isaac by Ghiberti and Brunelleschi are on display in the museum of the Bargello in Florence.

It took Ghiberti 21 years to complete these doors. These gilded bronze doors consist of twenty-eight panels, with twenty panels depicting the life of Christ from the New Testament. The eight lower panels show the four evangelists and the Church Fathers Saint Ambrose, Saint Jerome, Saint Gregory and Saint Augustine. The panels are surrounded by a framework of foliage in the door case and gilded busts of prophets and sibyls at the intersections of the panels. Originally installed on the east side, in place of Pisano's doors, they were later moved to the north side. They are described by the art historian Antonio Paolucci as "the most important event in the history of Florentine art in the first quarter of the 15th century".[4]

The bronze statues over the northern gate depict John the Baptist preaching to a Pharisee and Sadducee. They were sculpted by Francesco Rustici and are superior to any sculpture he did before. Rustici may have been aided in his design by Leonardo da Vinci, who assisted him in the choice of his tools.

Ghiberti was now widely recognized as a celebrity and the top artist in this field. He was showered with commissions, even from the pope. In 1425 he got a second commission, this time for the east doors of the baptistry, on which he and his workshop (including Michelozzo and Benozzo Gozzoli) toiled for 27 years, excelling themselves. The subjects of the designs for the doors were chosen by Leonardo Bruni d'Arezzo, then chancellor of the Republic of Florence.[5] These had ten panels depicting scenes from the Old Testament, and were in turn installed on the east side. The panels are large rectangles and are no longer embedded in the traditional Gothic quatrefoil, as in the previous doors. Ghiberti employed the recently discovered principles of perspective to give depth to his compositions. Each panel depicts more than one episode. In "The Story of Joseph" is portrayed the narrative scheme of Joseph Cast by His Brethren into the Well, Joseph Sold to the Merchants, The merchants delivering Joseph to the pharaoh, Joseph Interpreting the Pharaoh's dream, The Pharaoh Paying him Honour, Jacob Sends His Sons to Egypt and Joseph Recognizes His Brothers and Returns Home. According to Vasari's Lives, this panel was the most difficult and also the most beautiful. The figures are distributed in very low relief in a perspective space (a technique invented by Donatello and called rilievo schiacciato, which literally means "flattened relief".) Ghiberti uses different sculptural techniques, from incised lines to almost free-standing figure sculpture, within the panels, further accentuating the sense of space.

The panels are included in a richly decorated gilt framework of foliage and fruit, many statuettes of prophets and 24 busts. The two central busts are portraits of the artist and of his father, Bartolomeo Ghiberti.

Although the overall quality of the casting is exquisite, some mistakes have been made. For example, in panel 15 of the North Doors (Flagellation) the casting of the second column in the front row has been mistakenly overlaid over an arm, so that one of the flagellators looks trapped in stone, with his hand sticking out of it.[6]

Michelangelo referred to these doors as fit to be the "Gates of Paradise" (It. Porte del Paradiso), and they are still invariably referred to by this name. Giorgio Vasari described them a century later as "undeniably perfect in every way and must rank as the finest masterpiece ever created". Ghiberti himself said they were "the most singular work that I have ever made". 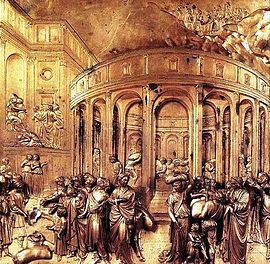 The story of Joseph, a panel from the second set of doors to the Baptistery

He was commissioned to execute monumental gilded bronze statues to be placed within select niches of the Orsanmichele in Florence, one of Saint John the Baptist for the Arte di Calimala (Wool Merchants' Guild) and one of St. Matthew for the Arte di Cambio (Bankers' Guild). Finally, he also produced a bronze figure of St. Stephen for the Arte della Lana (Wool Manufacturers' Guild).

He was also a collector of classical artifacts and a historian. He was actively involved in the spreading of humanist ideas. His unfinished Commentarii are a valuable source of information about Renaissance art and contain an autobiography, the first of an artist. This work was a major source for Vasari's Vite. Ghiberti died in Florence at the age of seventy-seven.[7]

Ghiberti's "Commentario" includes the earliest surviving autobiography of an artist. He discusses the development of art from the time of Cimabue through to his own work. In describing his second bronze portal for the Florence Baptistry, he states: "In this work I sought to imitate nature as closely as possible, both in proportions and in perspective ... the buildings appear as seen by the eye of one who gazes on them from a distance."

Paolo Uccello, who was commonly regarded as the first great master of perspective, worked in Ghiberti's workshop for several years, so it became difficult to determine the extent to which Uccello's innovations in perspective were due to Ghiberti's instruction. Donatello, known for one of the first examples of central-point perspective in sculpture, also worked briefly in Ghiberti's workshop. It was also about this time that Paolo began his lifelong friendship with Donatello. In about 1413 one of Ghiberti's contemporaries, Filippo Brunelleschi, demonstrated the geometrical method of perspective used today by artists, by painting the outlines of various Florentine buildings onto a mirror. When the building's outline was continued, he noticed that all of the lines converged on the horizon line.

Recent scholarship indicates that in his work on perspective, Ghiberti was influenced by the Arab polymath Alhazen who had written about the optical basis of perspective in the early 11th century. His Book of Optics was translated into Italian in the 14th century as Deli Aspecti,[8] and was quoted at length in Ghiberti's "Commentario terzo." Author A. Mark Smith suggests that, through Ghiberti, Alhazen's Book of Optics "may well have been central to the development of artificial perspective in early Renaissance Italian painting."[9]