Lorenzo Lotto (c. 1480 – 1556/57) was a Northern Italian painter, draughtsman and illustrator, traditionally placed in the Venetian school. He painted mainly altarpieces, religious subjects and portraits. While he was active during the High Renaissance, his nervous and eccentric posings and distortions represent a transitional stage to the first Florentine and Roman Mannerists of the 16th century.

During his lifetime, Lorenzo Lotto was a well-respected painter and certainly popular in Northern Italy. He is traditionally included in the Venetian School, but his independent career actually places him outside the Venetian art scene. He was certainly not as highly regarded in Venice as in the other towns where he worked. He had a stylistic individuality, even an idiosyncratic style. After his death, he gradually became neglected and then almost forgotten. This could be attributed to the fact that his oeuvre now remains in lesser known churches or in provincial museums.

Little is known of his training. As a Venetian he was influenced by Giovanni Bellini as he had a good knowledge of contemporary Venetian painting. Though Bellini was doubtless not his teacher, the influence is clear in his early painting Virgin and Child with St. Jerome (1506) (National Gallery of Scotland, Edinburgh). However, in his portraits and in his early painting Allegory of Virtue and Vice (1505) (National Gallery of Art, Washington) he shows the influence of Giorgione's Naturalism. As he grew older his style changed, perhaps evolving, from a detached Giorgionesque classicism, to a more vibrant dramatic setpiece, more reminiscent of his contemporary from Parma, Correggio. 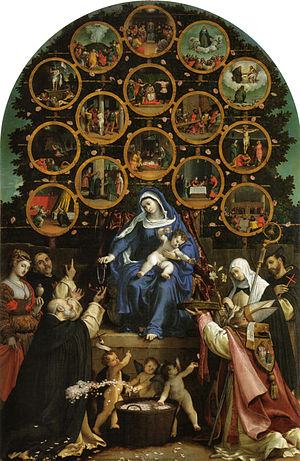 Lotto soon left Venice. The competition for a young painter would have been too great with established names such as Giorgione, Palma the Elder and certainly with Titian. Nevertheless, Giorgio Vasari mentions in the third part of his book Vite that Lotto was a friend of Palma the Elder.

In Treviso, a prospering town within the domain of the republic of Venice, he came under the patronage of bishop Bernardo de' Rossi. The already mentioned painting Allegory of Virtue and Vice was intended as an allegorical cover of his portrait (1505) of the bishop (now in National Museum of Capodimonte in Naples), who had survived an assassination attempt. The painting St. Jerome in the Desert (1500 or 1506) (Louvre, Paris) shows his youthful inexperience as a draughtsman, however the dramatic rocky landscape is accentuated by the red garment of the saint. At the same time he gives an early impression of his skill as a miniaturist.

He painted his first altarpieces for the parish church San Cristina al Tiverone (1505) and the baptistery of the Cathedral of Asolo (1506), both still on display in those churches.

In 1508 he began the Recanati Polyptych altarpiece for the church of San Domenico. This two-tiered, rather conventional painted polyptych consists of six panels. His portrait Young Man against a White Curtain in the Kunsthistorisches Museum, Vienna (c. 1506) and Adoration of the Child (c. 1508) in the National Museum in Kraków with Catherine Cornaro, Queen of Cyprus portraited as Saint Catherine, are paintings from this period.

As he became a respected painter, he came to the attention of Bramante, the papal architect, who was passing through Loreto (a pilgrimage site near Recanati). Lorenzo Lotto was invited to Rome to decorate the papal apartments. Nothing survives of this work, as it was destroyed a few years later. This was probably because he had imitated the style of Raphael, a rapidly rising star in the papal court. He had done this before in the Transfiguration in the Recanati polyptych.

In 1511 he was at work for the confraternity of the Buon Gesù in Jesi, painting an Entombment (Pinacoteca Civica, Jesi). Soon after, he was painting altarpieces in Recanati, a Transfiguration (c. 1512, now in the Pinacoteca Comunale, Recanati) and a fresco St Vincent Ferrer for the church San Domenico.

His work in Bergamo, the westernmost town of the Venetian republic, and surrounding areas was to prove his best and most productive artistic period. He received many commissions from wealthy merchants, well-educated professionals and local aristocrats. He had become a rich colourist and an experienced draughtsman. He developed the concept of the psychological portrait, revealing the thoughts and emotions of his subjects. In this he was continuing the tradition started by Antonello da Messina. A good example is his Portrait of a Young Man with a Book (now in the Accademia, Venice).

He started in 1513 with a monumental altarpiece Pala Martinengo in the Dominican church of S Stefano in Bergamo. This altarpiece was commissioned by Count Alessandro Martinengo-Coleoni, grandson of the famous condottiere Bartolomeo Colleoni. It would be finished in 1516. This altarpiece shows us the influence of Bramante and Giorgione. His next assignment was the decoration of the churches S Bernardino and S Alessandro in Colonna with frescoes and distemper paintings. He would finish five more altarpieces between 1521 and 1523.

In 1523 he went for a brief stay in the Marches, obtaining several commissions for altarpieces. He would paint these during his stay in Venice. 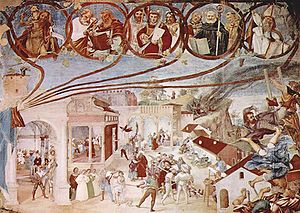 His next paintings are mostly wall paintings. In 1524 he painted a series of frescoes with the lives of saints (such as Saint Barbara) in the Suardi chapel in Trescore (near Bergamo). In the details he depicts scenes of each saint's life, such as in the fresco Martyrdom of St. Claire. In the same fresco he portrays Christ with vines sprouting from his hands, illustrating the words of the New Testament: "I am the vine, you are the branches".[2]

In 1524 he also painted the cartoons with Old Testament stories as models for the intarsia panels for the choir stalls of Santa Maria Maggiore in Bergamo.

More than twenty private paintings date from the same period. They are mostly of religious and pious subjects such as Madonnas or a Deposition, used for worship at home. They are painted in the Classical tradition, but Lotto adds a personal touch to the intense emotions. Using contrasting poses and opposing movement, he breaks the traditional symmetry of the Virgin surrounded by angels and saints. 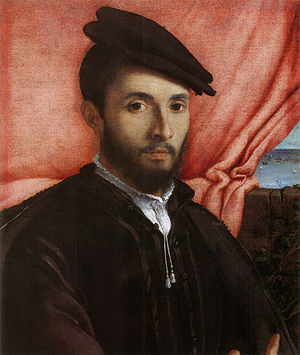 In Venice, Lotto first resided at the Dominican monastery of Santi Giovanni e Paolo, but he was forced to leave after a few months after a conflict with intarsia artist Fra Damiano da Bergamo. To cope with the many commissions he started to receive, he founded a workshop. He shipped five altarpieces for churches in the Marches and another one for the church Santa Maria Assunta in Celano (near Bergamo). Another altarpiece was for the Venetian church of Santa Maria dei Carmini, portraying St. Nicholas of Bari in Glory.

As Venice was a city of great wealth and as popularity increased, he received many orders for private paintings, including ten portraits, among them, Portrait of a Young Man (Gemäldegalerie, Berlin). His portrait of Andrea Odoni (Royal Art Collection, Hampton Court) (1527) would later influence the portrait of Jacopo Strada by Titian (1568) (Kunsthistorisches Museum, Vienna). But in Venice he was overshadowed by Titian, who dominated the artistic scene.

In this last period of his life, Lorenzo Lotto would frequently move from town to town, searching for patrons and commissions. In 1532 he went to Treviso. Next he spent about seven years in the Marche (Ancona, Macerata and Jesi), before returning to Venice in 1540. He moved again to Treviso in 1542 and back to Venice in 1545. Finally he went back to Ancona in 1549.

This was a productive period in his life, during which he painted several altarpieces and portraits.

At the end of his life, Lotto found it difficult to earn a living. Furthermore, in 1550 one of his works had an unsuccessful auction in Ancona. As recorded in his personal account book, this deeply disillusioned him. As he had always been a deeply religious man, in 1552 he joined the Holy Sanctuary at Loreto, becoming a lay brother. During that time he decorated the basilica of Santa Maria and painted a Presentation in the Temple for the Palazzo Apostolico in Loreto. He died in 1556 and was buried, at his request, in a Dominican habit.

Giorgio Vasari included Lotto's biography in the third volume of his book Vite. Lorenzo Lotto himself left many letters and a detailed notebook (Libro di spese diverse, 1538–1556), giving insight to his life and work. His influence was felt by many painters, including probably Giovanni Busi, and Ercole Ramazzini, born in Arcevia and active near Jesi.[3] Another pupil was Durante Nobili.

Thanks to the work of the art historian Bernard Berenson, Lotto was rediscovered at the end of the 19th century. Since then, many monographs and several exhibitions have been dedicated to Lorenzo Lotto, such as the exhibition in Venice in 1953 and one in the National Gallery of Art, Washington, USA, in 1998. 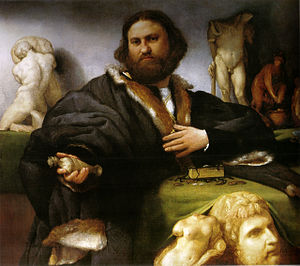 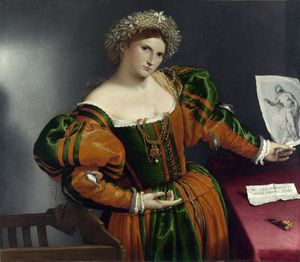 Venetian Woman in the Guise of Lucretia (1533).