Loretta Young (January 6, 1913 – August 12, 2000) was an American actress. Starting as a child actress, she had a long and varied career in film from 1917 to 1953. She won the 1948 best actress Academy Award for her role in the 1947 film The Farmer's Daughter, and received an Oscar nomination for her role in Come to the Stable, in 1949. Young moved to the relatively new medium of television, where she had a dramatic anthology series, The Loretta Young Show, from 1953 to 1961. The series earned three Emmy Awards, and reran successfully on daytime TV and later in syndication. In the 1980s Young returned to the small screen and won a Golden Globe in Christmas Eve in 1986. Young, a devout Roman Catholic,[1][2] worked with various Catholic charities after her acting career.[1][3]

She was born Gretchen Young in Salt Lake City, Utah, the daughter of Gladys (née Royal) and John Earle Young.[4][5] At confirmation, she took the name "Michaela". When she was two years old, her parents separated, and when she was three, she and her family moved to Hollywood. She and her sisters Polly Ann and Elizabeth Jane (better known as Sally Blane) worked as child actresses, but of the three, Young was the most successful.

Young's first role was at the age of three, in the silent film The Primrose Ring. During her high school years, she was educated at Ramona Convent Secondary School. She was signed to a contract by John McCormick (1893–1961), husband and manager of actress Colleen Moore, who saw the young girl's potential.[6] The name "Loretta" was given to her by Colleen, who later would explain that it was the name of her favorite doll.[7]

Young was billed as Gretchen Young in the silent film, Sirens of the Sea (1917). It was not until 1928 that she was first billed as "Loretta Young" in The Whip Woman. That same year she co-starred with Lon Chaney in the MGM film Laugh, Clown, Laugh. The next year she was named one of the WAMPAS Baby Stars.[8]

In 1930, when she was 17, she eloped with 26-year-old actor Grant Withers; they were married in Yuma, Arizona. The marriage was annulled the next year, just as their second movie together (appropriately titled Too Young to Marry) was released.

In 1935, she co-starred with Clark Gable and Jack Oakie in the film version of Jack London's The Call of the Wild, directed by William Wellman. 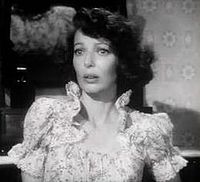 During World War II, Young made Ladies Courageous (1944; reissued as Fury in the Sky), the fictionalized story of the Women's Auxiliary Ferrying Squadron. It depicted a unit of female pilots during WWII who flew bomber planes from the factories to their final destinations. Young made as many as eight movies a year. In 1947 she won an Oscar for her performance in The Farmer's Daughter. That same year she co-starred with Cary Grant and David Niven in The Bishop's Wife, a perennial favorite. In 1949 she received another Academy Award nomination for Come to the Stable. In 1953 she appeared in her last theatrical film, It Happens Every Thursday, a Universal comedy about a New York couple who move to California to take over a struggling weekly newspaper; her costar was John Forsythe.

Loretta Young hosted and starred in the well-received half-hour anthology series The Loretta Young Show (1953–61). Her trademark was a dramatic entrance through a living room door in various high fashion evening gowns. She returned at the program's conclusion to offer a brief passage from the Bible or a famous quote that reflected upon the evening's story. (Young's introductions and conclusions to her television shows were not rerun on television because she legally stipulated that they not be, as she did not want the dresses she wore in those segments to "date" the program.) Her program ran in prime time on NBC for eight years, the longest-running prime-time network program hosted by a woman up to that time.[citation needed]

The program, which earned her three Emmys, was based on the premise that each drama was in answer to a question asked in her fan mail. The program's original title was Letter to Loretta. The title was changed to The Loretta Young Show during the first season (as of the February 14, 1954 episode), and the "letter" concept was dropped at the end of the second season. At this time, Young's hospitalization, due to overwork towards the end of the second season, required that there be a number of guest hosts and guest stars; her first appearance in the 1955–56 season was for the Christmas show. From then on, Young appeared in only about half of each season's shows as an actress, and served as the program's host for the remainder.

Minus Young's introductions and conclusions, the series was rerun as the Loretta Young Theatre in daytime by NBC from 1960 to 1964. It also appeared in syndication into the early 1970s, before being withdrawn.

In the 1962–1963 television season, Young appeared as Christine Massey, a freelance magazine writer and mother of seven children, in CBS's The New Loretta Young Show. It fared poorly in the ratings on Monday evenings against ABC's Ben Casey. It was dropped after one season of 26 episodes.[citation needed]

In the 1990s, selected episodes from Young's personal collection, with the opening and closing segments (and original title) intact, were released on home video, and frequently were shown on cable television.[citation needed]

In 1988 she was awarded the Women in Film Crystal Award for outstanding women who, through their endurance and the excellence of their work, have helped to expand the role of women within the entertainment industry.[9]

Young has two stars on the Hollywood Walk of Fame; one for motion pictures, at 6104 Hollywood Boulevard, and another for television, at 6141 Hollywood Boulevard. In 2011, a Golden Palm Star on the Palm Springs, California, Walk of Stars was dedicated to her.[10] 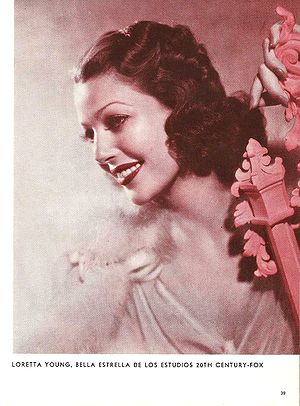 Young was married to actor Grant Withers from 1930 to 1931. From September 1933 to June 1934, Young had a public affair with Spencer Tracy, her co-star in Man's Castle.[11] She married producer Tom Lewis in 1940 and they divorced very bitterly in the mid-1960s; Lewis died in 1988. They had two sons, Peter Lewis (of the San Francisco rock band Moby Grape), and Christopher Lewis, a film director. She married fashion designer Jean Louis in 1993. Louis died in 1997. Young was godmother to Marlo Thomas (daughter of TV star Danny Thomas).[12]

In 1935, Young had a flirtation with then-married Clark Gable, while the actors were working on The Call of the Wild. (Gable was married to Maria "Ria" Franklin Prentiss Lucas Langham.) In 1998, she reportedly told her daughter-in-law that she had been date raped by Gable.[13] Afterward, Young became pregnant, but due to the moral codes placed on the film industry, Young covered up her pregnancy in order to avoid damaging her career (as well as Gable's). When the pregnancy began to show, she went on a "vacation" to England, and several months later returned to California. Shortly before the birth, she gave an interview from her bed, covered in blankets, stating that her long movie absence was due to a condition she'd had since childhood. Young gave birth to Judith Young on November 6, 1935, in a house that she and her mother owned in Venice, California. Three weeks later, she returned to movie making. After several months of living in the house in Venice, Judy was transferred to St. Elizabeth's, an orphanage outside Los Angeles. When she was 19 months old, her grandmother picked her up and Young announced to gossip columnist Louella Parsons that she had adopted the infant. Few in Hollywood were fooled by the ruse, and the child's true parentage was widely rumored in entertainment circles. Young refused to confirm or comment publicly on the rumors until 1999, when Joan Wester Anderson wrote Young's authorized biography. In her interviews with Anderson for the book, Young stated that Judy was her biological child and the product of Young having had a brief affair with Gable.[14] The child was raised as "Judy Lewis",[15] taking the last name of Young's second husband, producer Tom Lewis.

According to Judy Lewis's autobiography Uncommon Knowledge, some people made fun of her because of the prominent ears she had inherited from her father. She states that at seven she had an operation to "pin back" her large ears and that her mother always had her wear bonnets as a child. In 1958, Lewis' future husband Joseph Tinney told her "everybody" knew that Gable was her biological father. The only time Lewis remembered Gable visiting her was once at her home when she was a teenager; she had no idea he was her biological father. Several years later he appeared on The Loretta Young Show after Young had been in hospital for several months. Lewis was an assistant and was right behind her mother when she noticed Gable. They never had a relationship and she never saw him again.[16] Several years later, after becoming a mother herself, Lewis finally confronted her mother, who privately admitted the truth, stating that Judy was "a walking mortal sin".[17]

Loretta Young's daughter-in-law Linda Lewis, wife of Young's son Christopher, said the family stayed silent about the date rape claim until after both Loretta Young and her daughter Judy Lewis had died. The claim was reported in an article in BuzzFeed by Anne Helen Petersen in July 2015.[18]

Young was a lifelong Republican.[19] In 1952, she appeared in radio, print, and magazine ads in support of Dwight D. Eisenhower, and was in attendance at his inauguration along with Anita Louise, Louella Parsons, Jane Russell, Dick Powell, June Allyson, and Lou Costello, among others. In both 1968 and 1980 she was a vocal supporter of Richard Nixon and Ronald Reagan.[20] She was also an active member of the Hollywood Republican Committee with close friend Irene Dunne as well as Ginger Rogers, William Holden, George Murphy, Fred Astaire, and John Wayne.[21]

From the time of Young's retirement in the 1960s, until not long before her death, she devoted herself to volunteer work for charities and churches with her friends of many years: Jane Wyman, Irene Dunne, and Rosalind Russell.[22] She was a member of the Good Shepherd Parish and the Catholic Motion Picture Guild in Beverly Hills, California.[23] Young did, however, briefly come out of retirement to star in two television films, Christmas Eve (1986), and Lady in the Corner (1989). Young won a Golden Globe Award for the former, and was nominated again for the latter.[24]

In 1972, a jury in Los Angeles awarded Young $550,000 in her breach of contract suit against NBC. Filed in 1966, the suit contended that NBC had allowed foreign television outlets to rerun old episodes of The Loretta Young Show without excluding, as agreed by the parties, the opening segment where Young would make her entrance. Young testified that her image had been damaged by portraying her in "outdated gowns," and a jury agreed to less than the $1.9 million sought.[25]

Young died on August 12, 2000, from ovarian cancer, at the Santa Monica, California, home of her half-sister, Georgiana Montalbán[26] (the wife of actor Ricardo Montalban), and was interred in the family plot in the Holy Cross Cemetery in Culver City, California. Her ashes were buried in the grave of her mother, Gladys Belzer.[27] Her elder sisters had both died from cancer, as did her daughter, Judy Lewis, on November 25, 2011, at age 76.