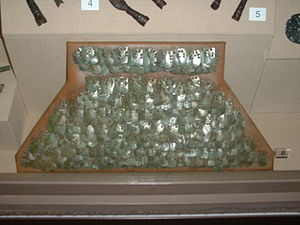 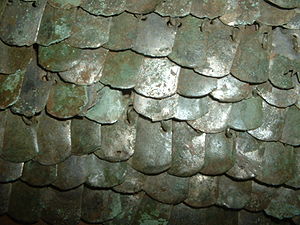 Detail of a fragment. Each plate has six holes and the scales are linked in rows. Only the "lower most" holes are visible on most scales, while a few show the pair above and the ring fastener passing through them.

The lorica squamata is a type of scale armour used by the ancient Roman military during the Roman Republic and at later periods. It was made from small metal scales sewn to a fabric backing.

It is typically seen on depictions of standard bearers, musicians, centurions, cavalry troops, and even auxiliary infantry, as well as regular legionaries. The somewhat historically inaccurate Roman victory triumph depicting Trajan's victory over the Dacians, the Tropaeum Traiani, shows the majority of legionaries wearing lorica squamata. A shirt of scale armour was shaped in the same way as a mail lorica hamata, mid-thigh length with the shoulder doublings or cape.

The individual scales (squamae) were either iron or bronze, or even alternating metals on the same shirt. They could be tinned as well, one surviving fragment showing bronze scales that were alternately tinned and plain. The metal was generally not very thick, 0.50 mm to 0.80 mm (.020" to .032") perhaps being a common range. Since the scales overlapped in every direction, however, the multiple layers gave good protection. The size ranged from as small as 6.3 mm wide by 9.5 mm tall (1/4" × 3/8") up to about 5 cm wide by 8 cm tall (2" × 3"), with the most common sizes being roughly 1.3 cm by 2.5 cm (1/2" × 1"). Many have rounded bottoms, while others are pointed or have flat bottoms with the corners clipped off at an angle. The scales could be flat, or slightly domed, or have a raised midrib or edge. All the scales in a shirt would generally be of the same size; however, scales from different shirts may vary significantly.

There was also a rare type where the backing was a mail locira hamata, effectively giving two layers of defence, but at the cost of greater weight and expense.[1]

It is possible that the shirt could be opened either at the back or down one side so that it was easier to put on, the opening being closed by ties. Much has been written about scale armour’s supposed vulnerability to an upward thrust, but this may be exaggerated.

No examples of an entire lorica squamata have been found, but there have been several archaeological finds of fragments of such shirts and individual scales are quite common finds - even in non-military contexts.

The type of armour in which the scales are laced to each other and need no backing at all is known as lamellar armour, while to confuse the matter there is also locking scale in which the scales are wired together without a backing. It can be difficult to tell which type of armour a single scale might have come from, as the Romans did not necessarily have different terms for each type. The typical scale had a vertical pair of holes at each side near the top, plus one or two holes at the top.