From Infogalactic: the planetary knowledge core
Jump to: navigation, search
Not to be confused with Lorrain dialect or Alsatian dialect. 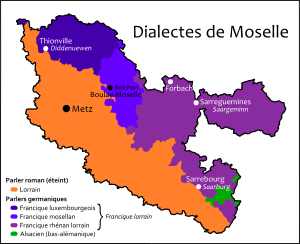 Dialects of Moselle. Those in purple areas are lumped under the term "Lorraine Franconian" when spoken in France.

The most reliable data comes from the Enquête famille carried out by INSEE (360,000 in the 1962 census) as part of the 1999 census, but they give a somewhat indirect picture of the current situation (see Languages in France for a discussion of this survey). Approximately 78,000 people were reported to speak Lorraine Franconian, but fewer than 50,000 passed basic knowledge of the language on to their children. Another statistic illustrating the same point is that of all adult men who used Franconian regularly when they were 5, less than 30% use (or used) the language regularly with their own children.[4]

The language border around 1630. 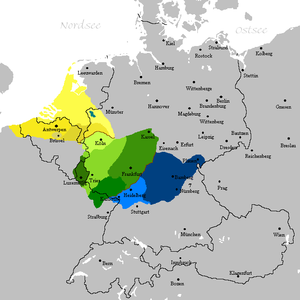