The Southwest Air Defense Sector (SWADS) is an inactive United States Air Force organization. Its last assignment was with the First Air Force, being stationed at March Air Force Base, California. It was inactivated on 31 December 1994. 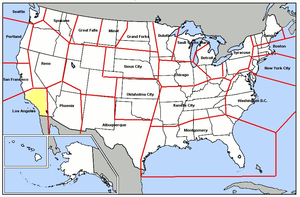 On 1 April 1966, LAADS was inactivated, as did the other 22 sectors in the country. Most of its assets were assumed by the 27th Air Division. 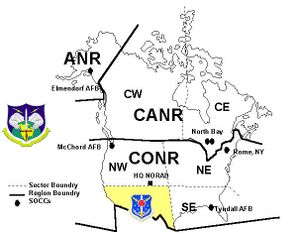 Reactivated as the Southwest Air Defense Sector (SWADS) on 1 July 1987 at March AFB, California, in the 26th Air Division; the sector received the 26th AD assets when it became inactive on 30 September 1990. SWADS was responsible for the atmospheric defense of approximately one-fourth of the Continental United States. Its eastern border was at the intersection of the 36th parallel north and 97th meridian west south to the Gulf of Mexico at the 28th parallel north. Its region extended west to include the region south of the 36th parallel north to the Pacific Ocean at the 122nd meridian west. It came under the Continental NORAD Region (CONR) Headquarters at Tyndall AFB, Florida. The Joint Surveillance System Sector Operations Control Center (SOCC) was at March AFB and Air Route Surveillance Radar (ARSR) data from several JSS radar stations and tethered aerostat radar balloons (e.g., Ground Equipment Facility J-31 near Los Angeles).