Lothair II or Lothair III[lower-alpha 1] (before 9 June 1075 – 4 December 1137), known as Lothair of Supplinburg, was Holy Roman Emperor from 1133 until his death. He was appointed Duke of Saxony in 1106 and elected King of Germany in 1125 before being crowned emperor in Rome. The son of the Saxon count Gebhard of Supplinburg, his reign was troubled by the constant intriguing of the Hohenstaufens, Duke Frederick II of Swabia and Duke Conrad of Franconia. He died while returning from a successful campaign against the Norman Kingdom of Sicily.

Little is known of Lothair's youth. He was a posthumous child, born at Unterlüß in 1075 shortly after his father, who had joined the Saxon Rebellion against the ruling Salian dynasty, died in the Battle of Langensalza on 9 June against troops loyal to Emperor Henry IV.[3] In 1100 he married Richenza, daughter of Count Henry of Northeim and Gertrude of Brunswick, heiress of the Brunonids.

After years of purchasing lands or gaining them via inheritance or marriage alliances throughout Saxony, Lothair gained the domains of the House of Billung, the Counts of Northeim and the Brunonids, and became one of the dominant landowners in the North German duchy. He backed the emperor's son Henry V during the disempowerment of his father Henry IV and in turn was made Duke of Saxony upon the death of Magnus of Billung in 1106.[4] Emboldened by the promotion and incensed over the imposition of a new tax on ducal lords, however, Duke Lothair subsequently revolted against Emperor Henry's rule and denied his ability to rule Saxony during the Investiture Controversy. He acted autonomously, vesting Count Adolf of Schauenburg with Holstein in 1110, was temporarily deposed in 1112 but reinstated after he tactically submitted himself to the rule of Henry V. In 1115 however, he joined the rebellious Saxon forces which defeated those of the Emperor in the Battle of Welfesholz.[5] When in 1123 Henry V vested Count Wiprecht of Groitzsch with the Margraviate of Meissen, Lothair enforced the appointment of Conrad of Wettin and ceded the March of Lusatia to Count Albert the Bear.

After the death of Emperor Henry V in 1125, Lothair was viewed by the Imperial chancellor, the Archbishop of Mainz, as a perfect candidate.[6] As an extensive landowner all over Saxony, he brought power to the table, but he was old (slightly over fifty years of age) and had no male issue, potentially making him malleable for the nobility. He was therefore elected King of the Romans after a contentious power struggle with Duke Frederick II, Duke of Swabia, head of the rising House of Hohenstaufen.[7] His election was notable in that it marked a departure from the concept of hereditary succession.[8] Somewhat naive concerning the complex power struggle between the papacy and the empire, Lothair also consented to several symbolic acts that were subsequently interpreted by Rome as signaling acceptance of papal confirmation of his position.[7]

A campaign undertaken in the same year against Bohemia ended in defeat, a weak start by Lothair. Among those captured by the Bohemians was Albert of Ascania, future Margrave of Brandenburg.

During his reign, a succession dispute broke out between the House of Welf and the Hohenstaufens; the latter were led by Frederick II, Duke of Swabia and his brother Duke Conrad of Franconia.[9] The Staufens, in addition to claiming the private Salian lands which clearly fell to them, also claimed all of the crown lands they had gained under Henry IV and Henry V. Lothair attempted to seize the crown lands following approval from a group of nobles meeting in Regensburg, which provoked Staufen reaction. Lothair then moved further. Frederick II was placed under the Imperial ban, Conrad was deprived of Franconia, and Lothair appointed his ally Conrad I, Duke of Zähringen as rector of Burgundy.

The Staufens, with the support of their own lands, many Imperial Free Cities, the Duchy of Austria, and the Duchy of Swabia, got Duke Conrad elected as "anti-king" Conrad III. In 1128 Conrad went to Italy, to be crowned King of Italy by Anselm V, Archbishop of Milan.[7][9] Lothair took advantage of Conrad's absence and weak position by attacking the Staufens in Germany. In 1129 he took two strong Staufen cities, Nuremberg and Speyer. Conrad failed to make anything of his visit to Italy, and returned in 1130 with nothing to show for it, which assured at least a partial victory for Lothair.[9]

Relations with the Papacy 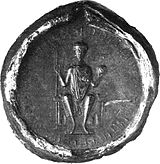 In the double papal election of 1130, both sides campaigned for Lothair's support. The king had an opportunity to take advantage of the situation and reassert imperial control over the papacy, but choosing instead to deal with the Staufen resistance, he let his inferiors make the decision. Anacletus II offered Lothair the Imperial crown, but in the end Innocent II gained his support, and he promised to escort the new pope back to Rome.[10] In 1131 the two met at Liège, where the king demonstrated subservience to the pope,[11] and his request that investiture be restored to him was ignored. He did, however, maintain the rights secured by the Concordat of Worms.[7] He also agreed to assist Innocent against King Roger II of Sicily, an ally of Anacletus.[4] In exchange, Innocent II again crowned Lothair as King of the Romans on 29 March 1131.[12]

The force Lothair took with him into Italy in 1132 was not strong, due to his leaving troops in Germany to prevent the Hohenstaufen from revolting. While he carefully avoided any cities that were hostile, he did attempt to besiege Milan, which failed due to the small army he had at his disposal.[13] Consequently, he reached Rome in 1133, which was mostly held by Anacletus. As St. Peter's Basilica was closed to them, Innocent instead crowned Lothair as emperor in the Lateran on 4 June 1133.[10] The emperor continued giving little or no resistance against papal interference with his power; he even ignored a bull by Innocent which stated that the emperor's authority derived from him. He also recognized papal claims to the Matildine lands (formerly owned by Countess Matilda of Tuscany), in exchange receiving those lands as fiefs.[10]

Returning to Germany, he set out to create peace. The Staufen brothers, falling short on resources, were compelled to submit.[14] The Reichstag in Bamberg in 1135 pardoned the two brothers and restored them to their lands. In return, they recognized Lothair as emperor, Conrad abandoned his title of King of Italy,[15] and both promised to assist him in another Italian campaign, before a ten-year ‘Landpeace’ was declared.

In 1136, at the insistence of Innocent and Byzantine Emperor John II Comnenus, the campaign against Roger of Sicily began.[4] Two main armies, one led by Lothair, the other by his son-in-law Henry X, Duke of Bavaria ("Henry the Proud"), entered Italy.[14] On the river Tronto, Count William of Loritello did homage to Lothair and opened the gates of Termoli to him. This was followed by the submission of Count Hugh II of Molise. Advancing deep into the southern part of the peninsula, the two armies met at Bari, and continued further south in 1137. Roger offered to give Apulia as a fief of the Empire to one of his sons and give another son as a hostage; terms which Lothair refused after being pressured by Innocent.

The German troops, however, were adamant against campaigning during the hot summer and revolted. The emperor, who had hoped for the complete conquest of Sicily, instead separated Capua and Apulia from Roger's kingdom and gave them to Roger's enemies.[16] Innocent, however, protested, claiming that Apulia fell under papal claims; the two eventually jointly enfeoffed the duchy to Rainulf of Alife.[16] Lothair turned north, but died while crossing the Alps on 4 December 1137.[17] His body was boiled to prevent putrefaction,[18] and his bones were carried to the monastery church of Saints Peter and Paul at Königslutter, which he endowed as his burial church and for which he laid the cornerstone in 1135.

Shortly beforehand, he gave his Tuscan Matildine lands to Henry the Proud of Bavaria, and his last acts were to give him also the Duchy of Saxony and the imperial regalia. However, the kingship subsequently ended up in the hands of the Staufens, destroying Lothair's hopes for a powerful Welf hereditary monarchy.

Actions in the north and east

The emperor's most long-lasting contribution to Germany came from his actions in the north and east. Being a Saxon, he gave more attention to the region than previous emperors. Even before becoming German king, he had given control of Holstein and Stormarn to Adolf I of Schauenburg. In 1134 he appointed the Ascanian Albert the Bear as Margrave of Brandenburg. In 1136 he appointed Conrad the Great of Wettin, already margrave of Meissen, to the position of margrave of Lausitz, uniting the two marches. In addition, he petitioned the pope to expand the rights of the Archbishopric of Bremen and Archbishopric of Magdeburg in the area. King Eric II of Denmark was made a vassal of the emperor in 1135, becoming a member of the Reichstag. Successful diplomatic intervention by Lothair in ending war between Poland and Bohemia/Hungary resulted in the Polish Duke's Bolesław III Wrymouth payment of Pomeranian tribute that was long overdue. In addition, the Polish Duke had to accept Pomerania and Rügen as fiefs of the Empire.

By his wife, Richenza of Northeim, Lothair had only one surviving child, a daughter Gertrude, born 18 April 1115. To secure Welf support for his election as King, Lothair married Gertrude to Henry X, Duke of Bavaria, on 29 May 1127.[19] Their only son was Henry the Lion.