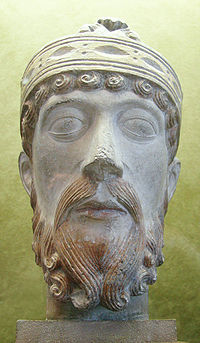 Twelfth-century bust of Lothair, from the Musée Saint Rémi at Reims

Lothair, born near the end of 941, was the son of Louis IV and Gerberga of Saxony.[3] He succeeded his father in 954 at the age of thirteen and was crowned at the Abbey of Saint-Remi by Artald of Reims, Archbishop of Reims.[4] Lothair's mother made an arrangement with her brother-in-law Hugh the Great, Duke of the Franks and Count of Paris, who had been an adversary to Lothair's father.[5] In exchange for supporting Lothair's rule Hugh was given rule over Aquitaine and much of Burgundy[6] as more or less a viceroy.[5] Lothair inherited a kingdom where the great magnates took lands, rights and offices almost without any regard for the king's authority.[7] Magnates like Hugh the Great and Herbert II, Count of Vermandois were always a veiled threat.[7]

In 955, Lothair and Hugh together took Poitiers by siege. With Hugh the Great's death in 956, Lothair, only fifteen, came under the guardianship of his maternal uncle Bruno, archbishop of Cologne. With Bruno's advice, Lothair mediated between Hugh's sons, Hugh Capet and the younger Otto Henry. The king gave Paris and the ducal title to Capet, although he later invested Otto with the Duchy of Burgundy in 960.

Altogether Lothair ruled for thirty-two years. His son Louis was crowned in June 978,[lower-alpha 1] but did not actually assume power until Lothair's death in 986.[8][9]

In 962, Baldwin III of Flanders, son, co-ruler, and heir of Arnulf I died and Arnulf bequeathed Flanders to Lothair. On Arnulf's death in 965, Lothair invaded Flanders and took many cities, but was eventually repulsed by the supporters of Arnulf II. He temporarily remained in control of Arras and Douai.[10] 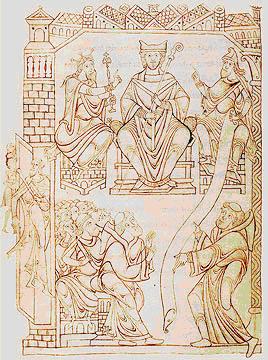 Richard II of Normandy (right), with the Abbot of Mont Saint-Michel (middle) and Lothair (left).

Lothair attempted to increase his influence in Lorraine, once held by his family, and in turn Emperor Otto II encouraged resistance to Lothair's overtures.[11] In 978 Lothair then mounted an expedition into Lorraine accompanied by Hugh Capet and upon their crossing the Meuse river Otto fled. Lothair then sacked the imperial Palace of Aachen reversing the direction of the bronze eagle of Charlemagne to face east instead of west.[lower-alpha 2][11]

Otto took his revenge in the autumn by invading France.[12] He penetrated as far as Paris, stopping at Reims and at Abbey of St. Medard, Soissons for devotions.[12] After three days of destruction Emperor Otto was driven back by Hugh Capet and his rearguard was defeated by Lothair's own forces while crossing the Aisne.[11] Peace was concluded between Lothair and Otto II in July 980 at Margut-sur-Chiers.[11]

When Otto II died on 7 December 983, Henry II, Duke of Bavaria abducted Otto's three-year-old son Otto III in hopes of being proclaimed king himself.[13] Archbishop Adalbero of Reims pressed for King Lothair to take charge of the situation but the plan failed by mid-984 when Empress Theophanu and Archbishop Willingis of Mainz were finally able to rescue Otto III and regain control of Germany.[13]

In 985, when the caliph of Córdoba, Al-Mansur, sacked Barcelona, Lothair was ill and could offer no assistance to the Count Borrel II upon receiving his envoys at Verdun.[14] This contributed to the final rift between the Hispanic March and the French crown during the reign of his successors. At this point Lothair's power seemed markedly less than that of Hugh Capet.[13] In a letter Gerbert of Aurillac wrote to the Archbishop Adalbero that "Lothair is king of France in name alone; Hugh is, however, not in name but in effect and deed."[15] Not long after, Archbishop Adalbero began openly pressing pro-Ottonian views and was trying to influence Hugh Capet into relations with Otto III.[13] In February 986, summoning Archbishop Adalbero to an assembly at Compiègne under false pretenses, he charged the surprised archbishop with treason.[16] But the assembly was interrupted and dispersed by the approach of Hugh Capet and his army before a verdict could be reached.[16] Two weeks later, on 2 March 986 Lothair died at Laon.[3][16]

Lothair married Emma of Italy, daughter of King Lothair II of Italy[3] and Adelaide of Italy.[17] Together they had two sons: