From Infogalactic: the planetary knowledge core
Jump to: navigation, search
For other uses, see Lothian (disambiguation).

Lothian (/ˈloʊ.ði.ən/; Scottish Gaelic: Lodainn) is a region of the Scottish Lowlands, lying between the southern shore of the Firth of Forth and the Lammermuir Hills. The principal settlement is the Scottish capital, Edinburgh, while other significant towns include Livingston, Linlithgow, Queensferry, Dalkeith, Musselburgh, North Berwick, Dunbar, and Haddington.

Historically, the term Lothian referred to a province encompassing most of what is now southeastern Scotland. In the 7th century it came under the control of the Anglian kingdom of Bernicia, the northern part of the later kingdom of Northumbria, but the Angles' grip on Lothian was quickly weakened following the Battle of Nechtansmere in which they were defeated by the Picts. Lothian was annexed to the Kingdom of Scotland around the 10th century.[2]

Subsequent Scottish history saw the region subdivided into three shires—Mid, East, and West Lothian—leading to the popular term 'the Lothians'. 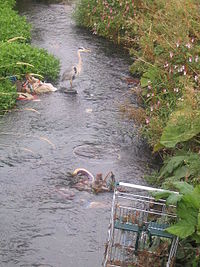 The Lothian Burn as it passes through Niddrie, Midlothian.

The origin of the name is debated. It perhaps comes from the British *Lugudūniānā (Lleuddiniawn in Modern Welsh spelling) meaning 'country of the fort of Lugus', the latter being the pagan god of commerce.[3] Alternatively it may take its name from a watercourse which flows through the region, now known as the Lothian Burn,[note 1] the name of which comes from the British lutna meaning 'dark or muddy stream'.[note 2][4]

A popular legend is that the name comes from King Lot, who is king of Lothian in the Arthurian legend. The usual Latin form of the name is Laudonia.[4]

Lothian under the control of the Angles 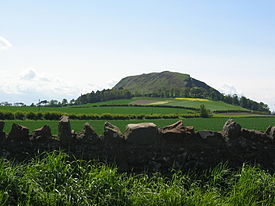 Traprain Law in East Lothian, said to have been the site of King Lot's capital.

Lothian was settled by Angles at an early stage and formed part of the Kingdom of Bernicia, which extended south into present-day Northumberland. Many place names in the Lothians and Borders demonstrate that the English language became firmly established in the region from the sixth century onwards. In due course Bernicia united with Deira to form the Kingdom of Northumbria.

Little is recorded of Lothian's history specifically in this time. After the Norse settled in what is now Yorkshire, Northumbria was effectively cut in two. How much Norse influence spread to the English north of the River Tees is uncertain. Bernicia continued as a distinct territory, sometimes described as having a king, at other times an ealdorman (earl). Bernicia became distinct from other English territories at this time due to its links with the other Christian kingdoms in what is present-day Scotland and seems to have little to do with the Norse-controlled areas to the south. Roger of Wendover wrote that Edgar, King of the English granted Laudian to the King of Scots in 973 on condition that he come to court whenever the English king or his successors wore his crown. It is generally accepted by medieval historians that this marks the point at which Lothian came under Scottish control.

William the Conqueror invaded Lothian and crossed over the River Forth[5] but did not re-annex it. At this time Lothian appears in the Anglo-Saxon Chronicle as Loðen or Loþen. As late as 1091, the Chronicle describes how the Scottish king, Malcolm, 'went with his army out of Scotland into Lothian', and in the reign of King David, the people living in Lothian are described as 'English' subjects of the king.

In the post-Roman period, Lothian was dominated by British speakers whose language is generally called Cumbric and was closely related to Welsh. In Welsh tradition Lothian is part of the 'Old North' (Hen Ogledd). Reminders exist in British place-names like Tranent, Linlithgow and Penicuik.[6]

Although one of the few areas of mainland Scotland where the Gaelic language was never dominant, the presence of some Gaelic place-names,[6][7] e.g. Dalry, Currie, Balerno and Cockenzie, has been attributed to the 'temporary occupation...[and] the presence of a landowning Gaelic-speaking aristocracy and their followers for something like 150-200 years.'[8]

Over time and due to various factors, the language of Lothian and Northumbria, a northern variety of Middle English, came to displace Gaelic as the language of the Lowlands. The dialects of the modern Lothians are sometimes considered to be part of Central Scots.

The Local Government (Scotland) Act 1973 abolished the ancient counties and burghs, replacing them with regions and districts. Lothian Regional Council formally took over responsibility from the old county councils in May 1975. The Lothian region was split into four districts: East, Mid and West Lothian, and the City of Edinburgh. The former had more or less identical boundaries to the old county of East Lothian, but West and Mid Lothian had large amounts of land taken from them to form the City of Edinburgh district. The council was responsible for education, social work, water, sewerage, transport (including local buses within Edinburgh).

The two-tier system was ended by the Local Government etc. (Scotland) Act 1994. Lothian Regional Council was replaced by four unitary councils based on the former districts.

The Pentland Hills in rural Lothian.