Theodore Lothrop Stoddard (June 29, 1883 – May 1, 1950) was an American historian, journalist, eugenicist, and political theorist. Stoddard is best known for his controversial works on race.

In 1922, Alec Waugh, board member at the firm Chapman & Hall during the early 1920's, arranged to have Stoddard's The Revolt Against Civilization published in England.

Stoddard had a noted role during the legislative debates over immigration restriction throughout 1923[3] and early 1924. He was invited to testify in the House Committee hearings alongside Harry H. Laughlin, Madison Grant, Robert DeCourcy Ward and Herbert Spencer Jennings.[4] As a result, the Johnson-Reed Immigration Act of 1924 passed by large majorities in both the House and Senate.

In 1929, Stoddard debated W. E. B. Du Bois on equality and the concept of the natural inferiority of "colored races".[5][6] In the same year, he debated Clarence Darrow on the subject of immigration law.[7]

America's Town Meeting of the Air at the Town Hall, in New York City, during broadcast of a debate on the subject: “Is Franco-Spain a Threat to World Peace?”. George V. Denny Jr. is at the speaker’s desk. Other speakers, seated left to right, are: Cecil Brown, Vincent Sheean, Lothrop Stoddard, and C. G. Paulding (Thursday, April 18, 1946)

Between 1939 and 1940, Stoddard spent four months as a journalist for the North American Newspaper Alliance in Nazi Germany. He got preferential treatment by Nazi officials compared to other journalists. An example was the Reich Ministry of Public Enlightenment and Propaganda's insisting that NBC's Max Jordan and CBS's William Shirer use Stoddard to interview the captain of the Bremen.[8][9]

Stoddard visited the Hereditary Health Court in Charlottenburg, an appeals court that decided whether Germans would be forcibly sterilized. After having observed several dysgenics trials at the court, Stoddard stated that the eugenics legislation was "being administered with strict regard for its provisions and that, if anything, judgments were almost too conservative" and that the law was "weeding out the worst strains in the Germanic stock in a scientific and truly humanitarian way."[8][10] Stoddard was taken aback by the forthrightness of the Nazis' anti-Jewish views, foreseeing that the "Jewish problem" would soon be settled "by the physical elimination of the Jews themselves from the Third Reich."[10]

Stoddard wrote a memoir, Into the Darkness: Nazi Germany Today (1940), about his experiences in Germany. Among other events, the book describes interviews with such figures as Heinrich Himmler, Robert Ley and Fritz Sauckel.[8]

Later in life, Stoddard acted as foreign policy expert for The Washington Evening Star. He also worked for WMAL-FM radio in Washington, D.C., owned by the Evening Star, where he was an editorial writer at the time of his death.

Stoddard was married to the Bostonian singer Elizabeth Guilford Bates on April 16, 1926. The couple had two children. After his wife's death in 1940, he married Zoya K. Dickens. He was a member of the American Historical Association, the American Political Science Association, and the Academy of Political Science. He was appointed to the Board of Directors of the American Birth Control League, a forerunner to Planned Parenthood by Margaret Sanger.[11] Stoddard was a lifelong Unitarian and Republican. He was also an enthusiastic stamp collector.

Stoddard's work was praised by such men as Dean Inge, Lord Northcliffe and President Warren G. Harding. However, after World War II, his theories were deemed too closely aligned with those of the German Reich and so he suffered a large drop in popularity.[12] His death in 1950 from cancer went almost entirely unreported despite his previously broad readership and influence.[13]

Stoddard authored over two dozen books, most related to race and civilization. He wrote primarily on the dangers posed by "colored" peoples to "white" civilization. Many of his books and articles were racialist and described what he saw as the peril of immigration. His most famous book was The Rising Tide of Color Against White World-Supremacy in 1920.[14][15] In this book, he presented a view of the world situation pertaining to race and focusing concern on the coming population explosion among the "colored" peoples of the world and the way in which "white world-supremacy" was being lessened in the wake of World War I and the collapse of colonialism. 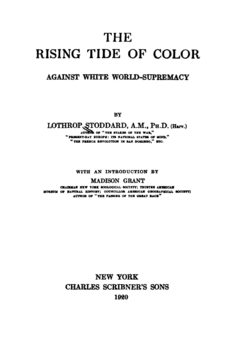 Stoddard argued that race and heredity were the guiding factors of history and civilization and that the elimination or absorption of the "white" race by "colored" races would result in the destruction of Western civilization. Like Madison Grant in his The Passing of the Great Race, Stoddard divided the white race into three main divisions: Nordic, Alpine, and Mediterranean. He considered all three to be of good stock and far above the quality of the colored races but argued that the Nordic was the greatest of the three and needed to be preserved by way of eugenics.

Stoddard blasted the ethnic supremacism of the Germans and blamed the "Teutonic imperialists" for the outbreak of World War I.[16] He opposed what he saw as the disuniting of white European peoples through intense nationalism and infighting.[citation needed]

Some of the predictions that he made in The Rising Tide of Color were accurate, not all of which were original to Stoddard or predicated on white supremacy. They include Japan's rise as a major power; a war between Japan and the US; a second war in Europe; the overthrowing of European colonial empires in Africa and Asia; the mass migration of non-white peoples to white countries; and the rise of Islam as a threat to the West because of Muslim religious fanaticism. (Stoddard was an Islamic scholar and would publish the book The New World of Islam in 1921.)[17][18]

An allusion to the book occurs in F. Scott Fitzgerald's The Great Gatsby, which is set in 1922 and was published in 1925.[19] Tom Buchanan, the husband of Daisy Buchanan, the novel's principal woman character, says:

"Civilization's going to pieces," broke out Tom violently. "I've gotten to be a terrible pessimist about things. Have you read 'The Rise of the Colored Empires' by this man Goddard?"

"Why no," I answered, rather surprised by his tone."

"Well, it's a fine book, and everybody ought to read it. The idea is if we don't look out the white race will be — will be utterly submerged. It's all scientific stuff; it's been proved."

"Tom's getting very profound," said Daisy, with an expression of unthoughtful sadness. "He reads deep books with long words in them. What was that word we — "

"Well these books are all scientific," insisted Tom, glancing at her impatiently. "This fellow has worked out the whole thing. It's up to us, who are the dominant race, to watch out or these other races will have control of things."

"We've got to beat them down," whispered Daisy, winking ferociously toward the fervent sun.

"You ought to live in California —" began Miss Baker, but Tom interrupted her by shifting heavily in his chair.

"This idea is that we're Nordics. I am, and you are, and you are, and —" After an infinitesimal hesitation he included Daisy with a slight nod, and she winked at me again. " — And we've produced all the things that go to make civilization — oh, science and art, and all that. Do you see?"

There was something pathetic in his concentration, as if his complacency, more acute than of old, was not enough to him any more.[20] 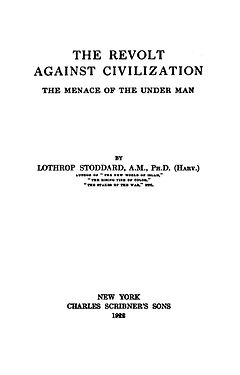 Title page of the first edition of Revolt Against Civilization

In The Revolt Against Civilization (1922), Stoddard put forward the theory that civilization places a growing burden on individuals, which leads to a growing underclass of individuals who cannot keep up and a 'ground-swell of revolt'.[21] Stoddard advocated immigration restriction and birth control legislation to reduce the numbers of the underclass and promoted the reproduction of members of the middle and upper classes. He considered social progress impossible unless it was guided by a "neo-aristocracy" from of the most capable individuals that was reconciled with the findings of science rather than based on abstract idealism and egalitarianism.[22]

In Re-Forging America: The Story of Our Nationhood (1927), Stoddard wrote:

We want above all things to preserve America. But "America," as we have already seen, is not a mere geographical expression; it is a nation, whose foundations were laid over three hundred years ago by Anglo-Saxon Nordics, and whose nationhood is due almost exclusively to people of North European stock—not only the old colonists and their descendants but also many millions of North Europeans who have entered the country since colonial times and who have for the most part been thoroughly assimilated. Despite the recent influx of alien elements, therefore, the American people is still predominantly a blend of closely related North European strains, and the fabric of American life is fundamentally their creation.[23]

In the same book, referring to the 1924 Immigration Act, Stoddard wrote:

It is perfectly true that our present immigration policy does (and should) favor North Europeans over people from other parts of Europe, while it discriminates still more rigidly against the entry of non-white races. But the basic reason for this is not a theory of race superiority, but that most fundamental and most legitimate of all human instincts, self-preservation — rightly termed "the first law of nature."[23]

"The cardinal point in our immigration policy should, therefore, be to allow no further diminution of the North European element in America's racial make-up."[23]