Lotus seeds or lotus nuts are the seeds of plants in the genus Nelumbo, particularly the species Nelumbo nucifera. The seeds are of great importance to East Asian cuisine and are used extensively in traditional Chinese medicine and in Chinese desserts. The seeds are most commonly sold in the shelled and dried form. Fresh lotus seeds are relatively uncommon in the market except in areas of lotus root and seed production (such as Upper and Central Sindh of Pakistan), where they are sometimes sold as a raw snack. Raw lotus seeds are low in saturated fat, cholesterol, and sodium, and are a good source of protein, thiamin, magnesium, phosphorus, potassium, and manganese.

In India, the dried seeds are called "Makkhane" in Hindi and they are used to make makkhane ki kheer, a type of milk pudding. In Manipur, the North-East Indian state, lotus seeds are locally known as thamchet and are eaten raw.

Lotus seeds are also very common in the northern part of Colombia, especially in cities like Barranquilla and Cartagena. Locals usually refer to lotus seeds as "martillo." Fresh lotus seeds are sold in street markets and are generally eaten raw by the locals. Lotus seeds are also sold as snacks called "Pesteh Daryayi" (پسته دریایی or "Pistachios of the Sea") in Anzali, Iran.[1] Lotus seeds snack is very famous in Thailand, particularly in Surin Province, it is called "Med-bua-op". While people of Upper and Central Sindh (Pakistan) love Fresh but raw lotus seeds as snack which are commonly called as "Dodee" there.

Two types of dried lotus seeds can be found commercially; brown peel and white. The former is harvested when the seed head of the lotus is ripe or nearly ripe and the latter is harvested when the seed head is still fully green but with almost fully developed seeds. White lotus seeds are de-shelled and de-membraned. At harvest, the bitter-tasting germ of most seeds is removed using a hollow needle. Brown peel lotus seeds are brown because the ripened seed has adhered to its membrane. The germ of these hard seeds is removed by cracking the seeds in half.

Dried lotus seeds past their prime oxidize to a yellow brown color. However, some sellers of dried lotus seeds bleach their products with hydrogen peroxide, sodium hydroxide, or other more toxic chemicals.[2] 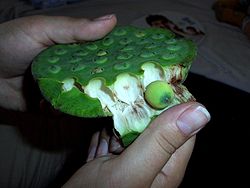 The most common use of the seed is in the form of lotus seed paste (蓮蓉), which is used extensively in Chinese pastries as well as in Japanese desserts.

Dried lotus seeds must be soaked in water overnight prior to use. They can then be added directly to soups and congee or used in other dishes. Fresh lotus seeds are sold in the seed heads of the plant and eaten by breaking the individual seeds out of the cone-shaped head and removing the rubbery shell. Crystallized lotus seeds (蓮子糖), made by drying lotus seeds cooked in syrup, are a common Chinese snack, especially during Chinese new year. 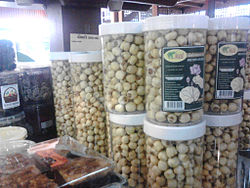 When cooked in clear soups, lotus seeds are believed to "clear heat" (清熱) and be particularly nutritious and restorative to one's health, which may explain their prevalence in Chinese cuisine.

The bitter dried germ of the lotus seed is sold as a restorative herbal tea (蓮子心茶).