Boudreau was an All-Star for seven seasons.[lower-alpha 1] In 1948, Boudreau won the American League Most Valuable Player Award and managed the Cleveland Indians to the World Series title. He won the 1944 American League (AL) batting title (.327), and led the league in doubles in 1941, 1944, and 1947. He led AL shortstops in fielding eight times. Boudreau still holds the MLB record for hitting the most consecutive doubles in a game (four), set on July 14, 1946.

In 1970, Boudreau was elected to the National Baseball Hall of Fame.

Boudreau was born in Harvey, Illinois, the son of Birdie (Henry) and Louis Bourdeau.[1] His father was of French ancestry and his mother was Jewish.[2] He was raised as a Catholic,[3] and graduated from Thornton Township High School in Harvey, Illinois where he led the "Flying Clouds" to three straight Illinois high school championship games, finishing first in 1933 and second in 1934 and 1935.[4]

While still at Illinois, Cleveland Indians general manager Cy Slapnicka paid him an undisclosed sum in return for agreeing to play baseball for the Indians after he graduated.[citation needed] His father complained to the Big Ten Conference, and league officials ruled him ineligible for collegiate sports.[citation needed] During his senior year at Illinois, he played pro basketball with the Hammond Ciesar All-Americans of the National Basketball League.

Boudreau made his major league debut on September 9, 1938 for the Cleveland Indians at 21 as a first baseman in his first game. In 1939, Indian manager Ossie Vitt told him that he would have to move from his normal third base position to shortstop since established slugger Ken Keltner already had the regular third base job.[6]

In 1940, his first full year as a starter, he batted .295 with 46 doubles and 101 RBI, and was selected for the All-Star Game for the first of five consecutive seasons (MLB cancelled the 1945 game due to war-time travel restrictions and did not name All-Stars).[7]

Boudreau helped make history in 1941 as a key figure in stopping the 56-game hitting streak by Joe DiMaggio. After two sparkling stops by Keltner at third base on hard ground balls earlier in the game, Boudreau snagged a bad-hop grounder to short barehanded and started a double play retiring DiMaggio at first.[8] He finished the season with a modest .257 batting average, but had a league-leading 45 doubles.

After the 1941 season, owner Alva Bradley promoted Indians manager Roger Peckinpaugh to general manager and appointed the 25-year-old Boudreau player-manager. Boudreau played and managed the Indians throughout World War II (playing basketball had put a strain on Boudreau's ankles that turned into arthritis, which classified him as 4-F and thus ineligible for military service).[6] In 1944, Boudreau turned 134 double plays, the most ever by a player-manager in MLB history. When he bought the Indians in 1947, Bill Veeck, after being approached by Boudreau, renewed the player-manager agreement with mixed feelings on both sides. However, Boudreau hit .355 in 1948 and Cleveland won the AL Pennant championship and the World Series, the Indians first World Series championship in 28 years and only the second (and as of 2014[update] its last) in Indians history, with Veeck and Boudreau publicly acknowledging each other's role in the team's success.

Boudreau was released by the Indians as both player and manager following the 1950 season. He signed with the Boston Red Sox, playing full-time in 1951, moving up to player-manager in 1952 and managing from the bench in 1953–54. He then became the first manager of the Kansas City Athletics in 1955 after their move from Philadelphia until he was fired after 104 games in 1957 and replaced by Harry Craft. He last managed the Chicago Cubs, in 1960.

Boudreau was elected to the Baseball Hall of Fame in 1970 with 77.33% of the vote. That same year, his uniform number 5 was retired by the Cleveland Indians (he wore number 4 with the Red Sox).

Boudreau is credited with inventing the infield shift, which came to be known colloquially as the "Boudreau shift." Because slugging Red Sox superstar Ted Williams was a dead-pull hitter, he moved most of his Cleveland Indian fielders to the right of second base against the Splendid Splinter, leaving only the third baseman and left fielder to the left of second but also very close to second base, far to the right of their normal positions. With characteristic stubborn pride, Teddy Ballgame refused the obvious advice from teammates to hit or bunt to left against the Boudreau shift, but great hitter that he was, not changing his approach against the shift didn't affect his hitting very much.

Boudreau later admitted that the shift was more about "psyching out" Williams rather than playing him to pull. "I always considered the Boudreau shift a psychological, rather than a tactical [ploy]", he declared in his autobiography Player-Manager.

The Lou Boudreau Award is given every year to the Cleveland Indians' Minor League Player of the Year.[9][10] 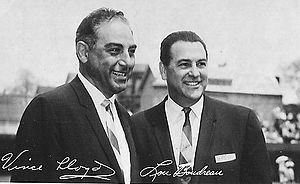 Boudreau did play-by-play for Cub games in 1958–59 before switching roles with manager "Jolly Cholly" Charlie Grimm in 1960. But after only one season as Cubs manager, Boudreau returned to the radio booth and remained there until 1987. He also did radio play-by-play for the Chicago Bulls in 1966–68.

The presence of a Hall of Fame announcer affected at least one game. On June 23, 1976, the Cubs were two runs behind at home in the fourth inning of the second game of a doubleheader against the Pittsburgh Pirates at home when the umpires called the game on account of darkness (since there were no lights at Wrigley Field until 1988), announcing that the game would be resumed at the same point the next day as was normally the case in those days. But Boudreau knew the rules better than anyone else in the park, it turned out, for he went down quickly to the clubhouse and pointed out to the umpires that a game that was not yet an official game and hence could not be treated as suspended game (i.e., it had not gone five innings, or four and a half with the home team leading, as neither was the case), and as such had to be replayed from the first pitch (as was then the rule in a rainout). The umpires called the National League office, found Boudreau was correct, and removed the two-run Cubs deficit.[11]

Boudreau married Della DeRuiter in 1938, who bore him four children. His daughter Sharyn married Denny McLain, a former star pitcher with the Detroit Tigers who was the last 30-game winner in the major leagues (31-6 for the world champion 1968 Detroit Tigers).

Boudreau had a home in Frankfort, Illinois for many years. He died in 2001 at St. James medical center in Olympia Fields, Illinois. He received a Catholic funeral and his body was interred in the Pleasant Hill Cemetery.[5][12]