From Infogalactic: the planetary knowledge core
Jump to: navigation, search
For the county in Tennessee, see Loudon County, Tennessee.

Loudoun County (/ˈlaʊdən/ LOWD-ən) is a county located in the Commonwealth of Virginia. In 2014, the population was estimated to be 361,708,[2] making it the third-most populous county in Virginia. Loudoun's county seat is Leesburg.[3] Loudoun County is included in the Washington-Arlington-Alexandria, DC-VA-MD-WV Metropolitan Statistical Area.

Loudoun County was established in 1757 from Fairfax County. The county is named for John Campbell, Fourth Earl of Loudoun and Governor General of Virginia from 1756–59.[1] Western settlement began in the 1720s and 1730s with Quakers, Scots-Irish, Germans and others moving south from Pennsylvania and Maryland and by English and African slaves moving upriver from Tidewater.

By the time of the American Revolution, it was the most populous county in Virginia. In addition, it was rich in agriculture. During the American Revolution, it contributed much of its grain to George Washington’s Continental Army, earning it the nickname “Breadbasket of the Revolution.”[5] During the War of 1812, important Federal documents and government archives were evacuated from Washington and stored at Leesburg for safe keeping. Local tradition holds that these documents were stored at Rokeby House and thus that Leesburg was briefly the capital of the United States.

Early in the American Civil War, the Battle of Balls Bluff took place near Leesburg on October 21, 1861. Future jurist Oliver Wendell Holmes, Jr. was critically wounded in that battle along the Potomac River. During the Gettysburg Campaign in June 1863, Confederate Major General J.E.B. Stuart and Union cavalry clashed in the battles of Aldie, Middleburg, and Upperville. Confederate partisan John S. Mosby based his operations in Loudoun and adjoining Fauquier County (for a more in-depth account of the history of Loudoun County during the Civil War, see Loudoun County in the American Civil War). 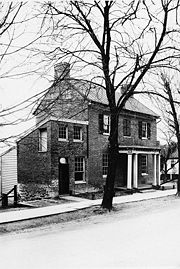 In 1962, Washington Dulles International Airport was built in southeastern Loudoun County in Sterling. Since then, Loudoun County has experienced a high-tech boom and rapid growth. Accordingly, many have moved to eastern Loudoun and become residents of planned communities such as Sterling Park, Sugarland Run, Cascades, and Ashburn Farms, making that section a veritable part of the Washington suburbs. Others have moved to the county seat or to the small towns and rural communities of the Loudoun Valley.[5]

Loudoun County was traditionally a Republican-leaning county. Prior to the 2008 election, it had not voted for a Democrat for President since Lyndon B. Johnson in 1964. In recent years, however, the county has experienced rapid growth in its eastern portion, driven mainly by commuters drawn by the close proximity to Washington, D.C. This has made Loudoun more competitive. After giving Senator Barack Obama nearly 54% of its presidential vote in 2008, the county shifted back to the GOP in 2009; Republican Robert F. McDonnell received 61% of the gubernatorial vote. Voters also removed two incumbent Democratic delegates, making Loudoun's state House delegation all-Republican. Loudoun shifted back to the Democrats in 2012 in the presidential election, as Obama recaptured the county with 51.5%, with Republican challenger Mitt Romney garnering 47%.[6]

Like many counties in Virginia, Loudoun is governed by a board of supervisors, the Loudoun County Board of Supervisors. The Chairman of the Board is elected by county voters at-large while the remaining supervisors are elected from each of eight electoral districts. All nine members serve concurrent terms of four years. While the board handles policy issues and sets the budget, day-to-day operations of the county government are handled by a County Administrator appointed by the board. The 2003 board, among other officials in Loudoun, was the subject of a federal investigation of possible corruption relating to a land deal involving the Royal Saudi Academy.[7]

In November 2007 voters removed four incumbent, fiscally conservative Republicans from the existing Board of Supervisors in a backlash over rapid development in the eastern portion of the county. The make-up of the board following the election was five Democrats, two Republicans, and two Independents.[8]

In November 2011, Republicans were elected to all nine seats on the Board.[9] The current Chairman is Scott K. York and the current Vice-Chairman is Janet Clarke, the Blue Ridge District Supervisor.

On September 6, 2015, Broad Run Supervisor Shawn M. Williams tendered his resignation after being arrested for assault.[10]

Due to the increasing differences between eastern and western Loudoun, some residents of western Loudoun[who?] have advocated for it to secede and form a new county,[11] which would be called Catoctin County, Virginia.[12] Its seat of government would be Purcellville,[13] its largest and most developed town. 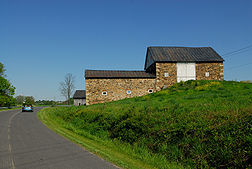 The scenic byways of Loudoun County are spotted with historical structures dating back to before the American Civil War.

According to the U.S. Census Bureau, Loudoun County has a total area of 521 square miles (1,350 km2), of which 516 square miles (1,340 km2) is land and 6 square miles (16 km2) (1.1%) is water.[14] It is bounded on the north by the Potomac River; across the river are Frederick, Washington and Montgomery counties in Maryland; it is bounded on the south by Prince William and Fauquier counties, on the west by watershed of the Blue Ridge Mountain across which are Jefferson County, West Virginia and Clarke County, and on the east by Fairfax County. The Bull Run Mountains and Catoctin Mountain bisect the county. To the west of the range is the Loudoun Valley. Bisecting the Loudoun Valley from Hillsboro to the Potomac River is Short Hill Mountain.

Traditionally a rural county, Loudoun's population has grown dramatically since the 1980s. Having undergone heavy suburbanization since 1990, Loudoun has a full-fledged service economy. It is home to world headquarters for several Internet-related and high tech companies, including Verizon Business, Telos Corporation, Orbital Sciences Corporation, and Paxfire. Like Fairfax County's Dulles Corridor, Loudoun County has economically benefited from the existence of Washington Dulles International Airport, the majority of which is located in the county along its border with Fairfax. Loudoun does retain a strong rural economy in the western part of the county. The equine industry has an estimated revenue of $78 Million. It is home to the Morven Park International Equestrian Center which hosts national horse trials. In addition, the county's growing wine industry has produced several internationally recognized wines. Loudoun now has 22 wineries[16] and over 25 active farms. Loudoun has rich soil and was in the mid-19th century a top wheat-producing county in the fourth largest wheat-producing state.[17]

According to the County's 2011 Comprehensive Annual Financial Report,[27] the top employers in the county are:

In 2011, Census survey data concluded that Loudoun County had the highest median income in the country at $119,134.[4]

The National Transportation Safety Board operates the Ashburn Aviation Field Office in Ashburn, an unincorporated area of Loudoun County.[34]

Emergency services are provided by the Loudoun County Fire and Rescue Department with the Office of Emergency Management. LCFR is a combination system that utilizes some 1500 volunteers and 500 firefighters, EMT/paramedics, and support staff. LCFR is one of the largest fire and rescue systems in Virginia.

The Silver Line of the Washington Metro, will extend into Loudoun County. The planned extension will include stations at the Dulles International Airport, and two stations in Ashburn, Virginia.

The county is served by Loudoun County Public Schools (LCPS). LCPS currently serves over 70,000 students from Kindergarten through 12th grade and is currently the fifth largest school system in Virginia.[35][36] While there is a growing trend towards home schooling in the county, the vast majority of school age children in Loudoun County attend LCPS schools.[citation needed] Loudoun County schools recently ranked 11th in the United States in terms of educational achievement versus funds spent.[37] Loudoun County also sends students to both its Loudoun Academy of Science, housed within Dominion High School,[38] and Thomas Jefferson High School for Science and Technology, a Virginia Governor's School in Alexandria, Virginia.[citation needed]