From Infogalactic: the planetary knowledge core
Jump to: navigation, search
For other uses, see Loughborough (disambiguation).

i/ˈlʌfbərə/ LUFF-bərə or /ˈlʌfbrə/ LUFF-brə) is a town within the Charnwood borough of Leicestershire, England. It is the seat of Charnwood Borough Council and home to Loughborough University. The town had a population of 57,600 in 2004,[1] making it the largest settlement in Leicestershire outside the city of Leicester. The town is close to the Nottinghamshire border and is within a short distance of locations such as Nottingham, the East Midlands Airport and Derby.

The town has the world's largest bell foundry — John Taylor Bellfounders, which made the bells for the Carillon war memorial, a landmark within the Queens Park in the town, Great Paul for St Paul's Cathedral, and York Minster. The first mention of Loughborough is in the 1086 Domesday Book.

Loughborough's earliest historical reference was as Lucteburne in the 1086 Domesday Book.[2]

The first sign of industrialization in the Loughborough district came in the early years of the 19th century, when John Heathcoat, an inventor from Derbyshire patented in 1809 an improvement to the warp loom, known as the twisted lace machine, which allowed mitts with a lace-like appearance to be made.

Heathcoat, in partnership with the Nottingham manufacturer Charles Lacy, moved his business from there to the village of Hathern, outside Loughborough. The product of this "Loughborough machine" came to be known as English net or bobbinet. However, the factory was attacked in 1816 by Luddites thought to be in the pay of Nottingham competitors and 55 frames were destroyed. This prompted Heathcoat to move his business to a disused woollen mill in Tiverton, Devon.[3]

In 1888 a charter of incorporation was obtained, allowing a mayor and corporation to be elected. The population increased from 11,000 to 25,000 in the following ten years.

Among the factories established were Robert Taylor's bell foundry John Taylor & Co and the Falcon works, which produced steam locomotives, then motor cars, before it was taken over by Brush Electrical Machines. Inn 1897, Herbert Morris set up a factory in the Empress Works in Moor Lane which become one of the foremost crane manufacturers by the mid-20th century.[4]

There was also strong municipal investment: a new sewage works in 1895, then a waterworks in Blackbrook and a power station in Bridge Street in 1899. The corporation took over Loughborough Gas Company in 1900.

In 1841, Loughborough was the destination for the first package tour, organised by Thomas Cook for a temperance group from Leicester.

The rail network is of growing importance in Loughborough, with services from London St. Pancras International, to which its twice-hourly London service goes, giving Loughborough railway station good links to the continent. East Midlands Trains is the long-distance operator running services between London and northern England, and provides local services throughout the East Midlands.

Rail routes run north–south through Loughborough along the Midland Main Line, going south to Bedford, Luton and London; and north to Lincoln, Sheffield, Leeds and York. Junctions at Leicester and Derby stations link with CrossCountry trains route, serving the far north-east of Scotland and the south-west of England.

Network Rail has recently redeveloped the station, increasing the length of platforms and improving access. The local council has made concurrent improvements to the surrounding area.

Brush Traction, a manufacturer of railway locomotives, is also located in the town, close to Loughborough's railway station.

The now derelict Charnwood Forest Canal once linked Nanpantan (on the west side of Loughborough) with Thringstone, with goods being carried into Loughborough by a horse-drawn wagonway. 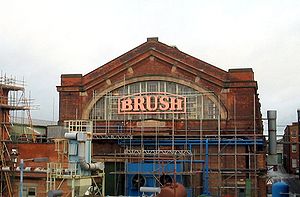 The centre of Loughborough's shopping area is the pedestrianised Market Place and Market Street, which maintain a number of original art deco buildings, such as the building that currently houses the town's cinema. A large outdoor market is held in the Market Place every Thursday and Saturday. There is a monthly farmers' market. The first mention of a market in Loughborough is in 1221.[citation needed]

The Rushes shopping centre has also been built on the site of the former bus station and is occupied by national chains. The Rushes is linked to the town centre area by Churchgate and Churchgate Mews; the latter has independent shops.

A major new development, the Eastern Gateway, that developed the area around the railway station with a new road and new housing, was completed in 2013.

Pedestrianisation of the town centre was completed in November 2014. The scheme is intended to improve the economy within the town centre and reduce pollution from traffic congestion.

As with the rest of the British Isles and East Midlands, Loughborough experiences a maritime climate with cool summers and mild winters. The nearest Met Office weather station is at Sutton Bonington, about 3.5 miles due north of the town centre. The highest temperature recorded in that area was 34.8 °C (94.6 °F) [5] on 3 August 1990.

The University's 1st XV rugby team, the Loughborough Students RUFC, were promoted to the National One division in 2012, which is the 3rd tier of English rugby. 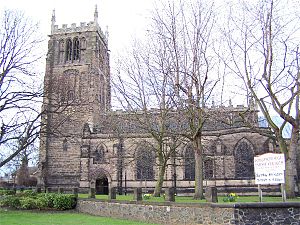 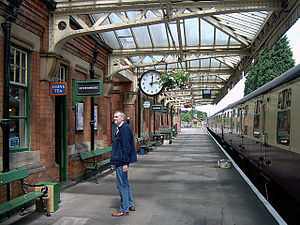 Loughborough has five museums, the largest being the centrally located Charnwood Museum, which houses a range of exhibits reflecting the natural history, geology, industry and history of the area. Nearby in Queens Park is the Carillon and War Memorial, home to a small museum of military memorabilia from the first and second World Wars. Loughborough Library is in Granby Street.[6] Also to be found in the town centre, near the fine medieval All Saints parish church, is the Old Rectory. Dating back to 1288 the remaining portion of the Great Hall has been restored and houses a small museum run by the Loughborough and District Archaeological Society.

Loughborough has for more than a century been the home of John Taylor & Co bell founders and the firm has a museum—the Bellfoundry Museum—located on two floors telling the story of bell making over the centuries.

There is a museum at the Great Central Railway station illustrating the history of the railway from its earliest days up to its present state as a double-track preserved heritage railway.

Although it has no dedicated art gallery, fine pieces of sculpture can be found in the town's environs, including recently installed sculptures from a local artist in commemoration of the WWI Centenary outside of Charnwood Museum, and the ‘Sock Man’,[7] a bronze statue celebrating Loughborough's association with the hosiery industry. This can be found in the Market Place near the Loughborough Town Hall, which itself contains a number of art works.

The Loughborough Town Hall is the venue for a range of events, including concerts, exhibitions, musicals, comedy shows and a Christmas pantomime. Groups make use of the town hall for their shows.

Events are also organised by Charnwood Arts, a voluntary managed and professionally staffed body, which promotes a year-round programme of professional performances across the borough. The organisation is responsible for The Picnic In the Park event, which was inaugurated in 1980 and is held in Queens Park in May. Streets Alive, jointly organised by Charnwood Arts and Charnwood Borough Council takes place at a similar time of year.

The Loughborough Canal Festival, which started in 1997, is an annual event in May centred on Chain Bridge.

Great Central Railway is a heritage railway based at Loughborough Central Station, which is south of the town centre. It is operated largely by volunteers and trains run every weekend of the year and bank holidays, as well as daily during the summer.

Every November, the street fair takes over the centre of the town and closes the A6 and other roads. The fair runs from Wednesday afternoon until Saturday night. The fair has many rides, amusement arcades, food stands and games.

The town has an Odeon cinema. This cinema was designed by Archibald Hurley Robinson. There are six screens in the theatre, which is built to an art deco style. The cinema was built in 1914 as the Empire Cinema, and was remodelled in 1936 by Archibald Hurley Robinson as the New Empire Cinema. Over the years it has been named the Palm Court and Ballroom, Empire, Essoldo, Classic, Curzon and Reel.

Loughborough as a variety of uniformed youth organisations, with several Scout and Girl Guide units, units from the cadet forces (Air Training Corps, Army Cadet Force, Sea Cadet Corps, and Combined Cadet Forces at Loughborough Grammar School), a St Johns Ambulance Cadet unit, and a cadet programme run by the local Fire and Rescue Service. As of November 2015 Loughborough also has a Volunteer Police Cadets unit based at Loughborough College. 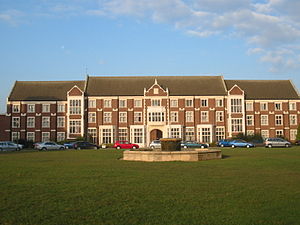 Loughborough College is the second biggest education establishment in Loughborough, after the University. Its offers Further Education and vocational courses. It was established in 1909, and has an over 12,000 full and part-time students population.

RNIB College, Loughborough is for people aged 16+ and adults with a wide range of disabilities seeking to access education, employment and independent living.

Loughborough natives include Albert Francis Cross, the journalist, author, poet and playwright who was born on Moor Lane on 9 May 1863, the two time Laurence Olivier Award nominated stage actress Nicola Hughes and Coronation Street's Roy Cropper actor David Neilson, and also the notorious rock star of the mid-1960s, Viv Prince of the Pretty Things. Bobsleigher and Paratrooper Dean Ward, who won a bronze medal at the 1998 Winter Olympics was also born in the town.

Most biographies of Felix Buxton of Basement Jaxx suggest he was a Londoner. In fact he was a pupil at Loughborough Grammar School and son of the one-time vicar of nearby Woodhouse Eaves and Ibstock. The Dundee-born comedian, TV presenter and entertainer Danny Wallace attended Holywell County Primary School. The high jumper Ben Challenger, son of Showaddywaddy drummer Romeo Challenger, is also from Loughborough. The popular Muslim and Bangladeshi presenter Rizwan Hussain was brought up there. In 2009, Fred Bowers, a 73-year-old Loughborough pensioner, reached the semi-finals of Britain's Got Talent, with his breakdancing act and the actress Lydia Rose Bewley best known for The Inbetweeners Movie.

Loughborough was the birthplace of the poet and Royalist John Cleveland (1613–1658).[9] 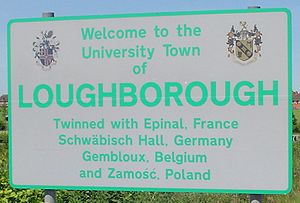 Loughborough is twinned with:

This list is of the closest cities and towns to the town of Loughborough. This list does not include villages.