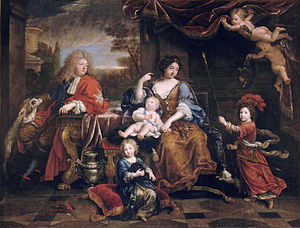 Louis, playing with an arrow, with his parents and brothers in 1687

Louis was born in the Palace of Versailles, the eldest son of Louis, le Grand Dauphin, and his wife Maria Anna Victoria of Bavaria. At birth, he received the title of Duke of Burgundy (duc de Bourgogne). As the son of the Dauphin, he was a fils de France and second in the line of succession to his grandfather, King Louis XIV.

Louis grew up with his younger brothers; Philip, Duke of Anjou, who was to become King Philip V of Spain; and Charles, Duke of Berry. He lost his mother when he was eight. His father never played a major role in politics.

The Duke of Burgundy was reputed to be a difficult child who respected no one, but under the influence of his tutor François Fénelon, Archbishop of Cambrai, he grew into a very pious and religious man.[citation needed] Fénelon's thoughts and beliefs influenced the young prince throughout his life.

At the age of 15, he married his second cousin, Princess Marie-Adélaïde of Savoy, the daughter of Victor Amadeus II, Duke of Savoy and Anne Marie d'Orléans. This match had been decided as part of the Treaty of Turin, which ended Franco-Savoyard conflicts during the Nine Years' War. The wedding took place on 7 December 1697 at the Palace of Versailles.

In 1702, at the age of twenty, the Duke of Burgundy was admitted by Louis XIV to the Conseil d'en haut (High Council), which was in charge of state secrets regarding religion, diplomacy and war. His father had only been admitted to the High Council at the age of thirty.

In 1708, during the War of the Spanish Succession, Louis was given command of the army in Flanders, with the experienced soldier Louis Joseph, Duke of Vendôme, serving under him. The uncertainty as to which of the two should truly command the army led to delays and the need to refer decisions to Louis XIV. Continued indecision led to French inactivity as messages travelled between the front and Versailles; the Allies were then able to take the initiative. The culmination of this was the Battle of Oudenarde, where the Duke of Burgundy's mistaken choices and reluctance to support Vendôme led to a decisive defeat for the French. In the aftermath of the defeat, his hesitation to relieve the Siege of Lille led to the loss of the city and thereby allowed the Allies to make their first incursions onto French soil.

The Duke of Burgundy was influenced by the dévots and was surrounded by a circle of people known as the faction de Bourgogne (Burgundy's faction), which was most notably made up of his old tutor Fénelon, his old governor Paul de Beauvilliers, Duke of Saint-Aignan and his brother-in-law Charles Honoré d'Albert, Duke of Chevreuse, as well as the renowned memorialist, Louis de Rouvroy, Duke of Saint-Simon.

These high-ranking aristocrats sought a return to a monarchy less absolute and less centralised, with more powers granted to the individual provinces. They perceived that government should work through councils and intermediary organs between the king and the people. These intermediary councils were to be made up not by commoners from the bourgeoisie (as the ministers appointed by Louis XIV) but by aristocrats who perceived themselves as the representatives of the people and would assist the king in governance and the exercise of power. Had the Duke of Burgundy succeeded to the throne, he may have applied this concept of monarchy. 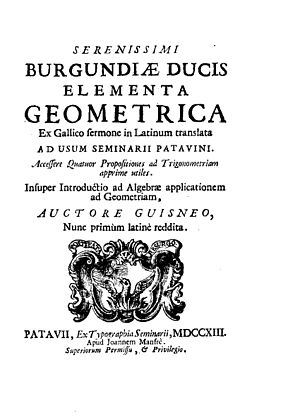 Louis became Dauphin of France upon the death of his father in 1711. In February 1712, his wife contracted measles and died on February 12. The Duke of Burgundy, who dearly loved his wife and who had stayed by her side throughout the fatal illness, contracted the disease and died on 18 February, six days after her. He died at the Château de Marly at the age of 29. Both of his sons also became infected. The elder, Louis, Duke of Brittany, the latest in a series of Dauphins, succumbed to it on 8 March. The only one to survive was the two-year-old Duke of Anjou, the future King Louis XV.

The death of the Duke of Burgundy precipitated a possible succession crisis as he left as the heir apparent to his seventy-four-year-old grandfather his frail infant son whose chances of survival were thought minimal. It also ruined the hopes of the faction de Bourgogne, whose members would soon die of natural death.

Nonetheless, some of their ideas were put into practice when, Philippe II, Duke of Orléans, as regent during Louis XV's minority, created a form of government known as polysynody, where each ministry was replaced by a council composed of aristocrats. However, the absenteeism, ineptitude and conflicts of the aristocrats caused this system of governance to fail, and it was soon abandoned in 1718 in favour of a return to absolute monarchy.